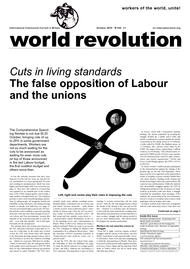 Cuts in living standards: The false opposition of Labour and the unions

The Comprehensive Spending Review is not due till 20 October, bringing cuts of up to 25% in some government departments. Workers are not so much waiting for the cuts to be announced as waiting for even more cuts on top of those announced in the last Labour budget, the first coalition budget and others since then.

In fact the austerity measures that have been imposed over the last two years are only the latest, and harshest, in a series going back 40 years and resulting in unemployment which has risen higher and lasted longer with every recession (see page 2). They have also robbed us of much that was regarded as an essential part of the welfare state in the 1960s (student grants, school milk, a large number of hospital beds, etc). The relentless pressure to drive down benefits spending, particularly by taking people off incapacity benefit and Disability Living Allowance and cutting housing benefit, is already well underway (see 'Brutal attack on benefits'). The new government plan to get people off benefits and into work is unlikely to succeed in getting them into work any more than attempts by previous Labour and Tory governments, because this depends on the economy being able to create the jobs – even with state subsidy – but it will make life harder for the unemployed. 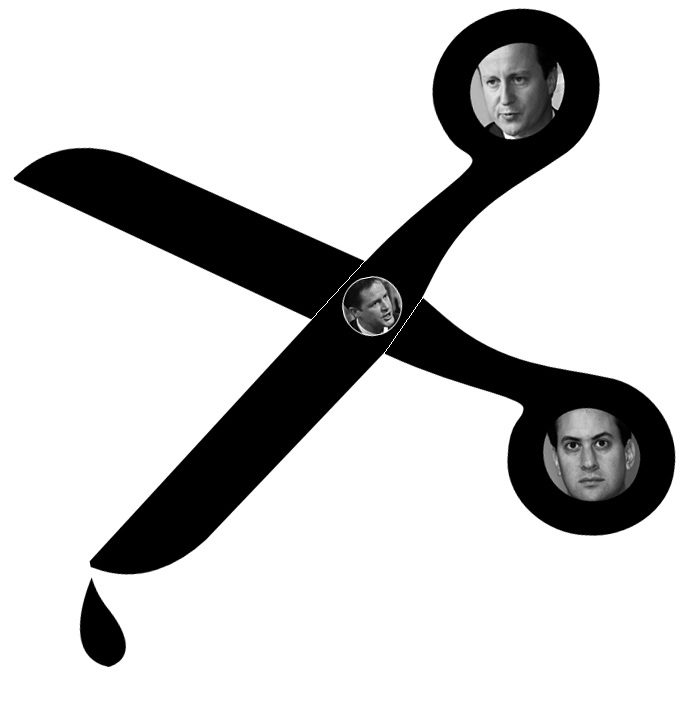 The austerity drive has created more interest in the TUC and party conference season than we’ve seen for a long time, as the media have looked at how the TUC and Labour Party will respond to the discontent growing among workers, and at the Lib-Dems to see how the coalition is holding up – which it is at present. Will there be another ‘winter of discontent’ like the widespread strikes in the public sector and beyond in 1978-79? Will there be big confrontations between government and unions as under Thatcher? The TUC have certainly made some militant sounding noises: Brendan Barber condemned cuts in services and jobs which “increase inequality…. make Britain a darker, brutish, more frightening place”; Dave Prentis of Unison said “when the call was there” they would “co-ordinate industrial action”. All this sound and fury actually comes down to … a demonstration outside Westminster on the eve of the spending review and a demonstration in March. What of Bob Crow, famous for being a militant firebrand? When he wants to go beyond his TUC colleagues in calling for alliances with communities, he is calling for direct action – what the Guardian (14/9/10) accurately described as “Fathers4Justice-style publicity stunts over a general strike”.

In fact the TUC, like the Labour Party under the leadership of ‘Red Ed’ Miliband (see ''Red Ed': a good choice for the bourgeoisie' ), wants the deficit reduced over a longer period of time, and with a ‘fairness test’ according to a TUC statement. Downing Street is spot on about wanting “a genuine partnership with the trade unions”. After all, the only disagreement is about the details of the timing of the cuts and not the fact – ‘fairness’ is a nonsense since all measures to deal with the crisis must hit the working class. This will become much more stormy when there is more workers’ struggle and the unions needed to put on a more militant mask – this will not break but disguise the ‘genuine partnership’.

Workers do not need the unions to struggle

From left to right, everyone equates workers’ struggles with the actions of the unions. Socialist Worker wants them to call a general strike, Socialist Resistance wants local anti-cuts campaigning to build the demonstration in March. There have been union called general strikes against austerity in Greece, France, Spain and the important Tekel strike in Turkey which can tell us much about what that may achieve.

In Greece, faced with a horrendous austerity package, the unions responded by keeping the struggle divided up: a public sector strike and march to parliament to protest against the attacks on pensions by the Adedy union on 10 February; a strike called by PAME, the Stalinist union, on 11 February; and a private sector strike by the GSEE, the largest union, representing 2 million workers, on 24 February. “The demonstrations organised by PAME and the CP never come together with the demonstrations called by other workers’ unions and student organizations.” (Proles and Poor’s Credit Rating Agency, aka TPTG 14/3/10, in WR 333).

In France around 3 million people participated in the demonstrations against the raising of the pension age on 7th and 23rd September. These days of action were organised on the typical union model of keeping everyone isolated behind their own union banners, chanting sterile slogans and deafened by bangers and noisy sound systems. All to prevent any real discussion. Unlike the students who successfully struggled against the CPE by calling demonstrations at the weekend so as many workers as possible could join them, a struggle controlled by assemblies, mass meetings, of the students, the unions delayed the next demonstration for 2 weeks to a weekday when workers could participate only by losing a day’s pay.

In Turkey workers from Tekel were so disgusted with the trade union they tried to form their own strike committee, and when they tried to talk to the union they found their way barred by 15,000 police leading one worker to conclude: “If you ask me, it is quite natural for the police to protect the union and the union bosses, because don’t the union and the trade-unionists protect the government and capital? Don’t the trade-unions exist only in order to keep the workers under control on behalf of capital?” ("If the unions are on our side, why are there 15,000 riot police between us and them?").

On 29 September workers in Spain showed their anger at the cuts by a general strike affecting, among other industries, refuse collection and transport. However workers show their greatest strength when they organise themselves in general assemblies which discuss and take decisions on the struggle, as the Madrid metro workers did, and there was real solidarity from other workers, as in the Post Office ('Solidarity with the metro workers of Madrid!', WR 337).

We have also seen some very powerful wildcat strikes where the unions are very weak and unable to control the workers, as in China and Bangladesh ('China ‘right to strike’ – no gain for workers', 'Bangladesh: wildcat strikes and demonstrations',WR 337 and 'Strike wave across China', WR335).

All over the world, same crisis, same struggle

There is no doubt that workers all over the world face the same capitalist exploitation, the same capitalist crisis, austerity everywhere, and have the same need to struggle against it. Large scale strikes have largely not developed in Britain, workers are discontented but often do not see how to take the struggle forward. Struggles here also give the same lessons as those elsewhere in the world – when unions are in charge of the struggle workers are kept separate, as with the BA cabin crew and BAA workers, whatever fine speeches are made about “co-ordinated industrial action”, but when workers go into struggle on their own they find ways of showing solidarity as with the Heathrow baggage handlers strike in support of Gate Gourmet workers 5 years ago.

We see the same effort to understand and respond to the situation on discussion forums and in local groups discussing working class politics, such as the Manchester class struggle forum ('A proletarian discussion forum in Manchester', WR 337). Workers getting together in discussion circles or networks , discussing the lessons of past struggles, and all questions of working class politics, the dire perspective capitalism has to offer and how it can be overthrown, are an important promise and preparation for the future.