Recent newspaper articles, Simon Jenkins in The Guardian, September 10 for example, have expressed some hand-wringing within the bourgeoisie recently over the question of drugs: the obvious failure of the “war on drugs”, whether to legalise this or that drug, whether to decriminalise and so on. It’s all hot air. Drugs and the drugs business are integral aspects of capitalism and, further, integral aspects of militarism, imperialism and capitalist decomposition. Jenkins points to the 28,000 people in Mexico killed in the last four years as a direct result of the drugs trade. He also gives an estimate of half-a-million people directly employed in the Mexican drugs trade - other estimates go up to a million[1]. In Mexico the drugs industry is one of the few expanding businesses in an increasingly poverty-stricken country and President, Felipe Calderon, has admitted defeat in his four year “war on drugs”. Drugs war ‘expert’ Edgardo Buscalgia in The Guardian 13.9.10, has called the predominance of the drugs cartels in Mexico a “narco-insurrection” ­and US Secretary of State Hillary Clinton, earlier this month, went some way to suggesting that Mexico was a failed state, with all the military implications that that has for this weaker neighbour of US imperialism. Jenkins bemoans the impact of the criminalisation of drugs on Latin American democracies, Bolivia, Peru, Colombia and now Mexico. But these democratic states have not been ‘polluted’ by illegal drugs but by the fact, particularly in this period when capitalism is rotting on its feet, that these relatively weaker states can only be organisations of gangsters and all the criminality that goes with that. The same is also essentially true of the stronger, major powers whose militaries and secret services are deeply involved in the illegal drugs industry. Drugs, legal or illegal, are not a Latin American problem but a facet of imperialism world-wide.

Just one example: on the Canadian border, despite various crackdowns, the business of “drugs for guns” as well as for cash is just as active if not as dramatic as the southern US border region. Canadian police estimate one hundred thousand British Columbians engaged in the marijuana business alone. There’s a veritable United Nations of organised criminal gangs of tens of thousands involved in cross-border drug-running from Canada into the United States with home grown outlaw motor-cycle gangs involved. Simon Jenkins above argues that there should be a relative weight between “hard” and “soft” drugs with an element of decriminalisation involved. But he himself, though he can only see a way out within capitalism, is correct about the hypocrisy of the “war on drugs” and quotes the words of the UN’s prohibitionist drugs czar, Antonio Maria Costa with justifiable anger: Costa recently suggested that $352 billion of drug cartel’s money helped to stave off the collapse of the world’s economic system in 2008-9 by providing much needed liquidity. But even this is not the major indication of the scale of the drugs industry and its relationship to the irrationality and decomposition of capitalist society.

Drugs and imperialism in Afghanistan

For some years now, the poppy, as a symbol of the carnage wrought by war, has had an added piquancy. The UN Office on Drugs and Crime has detailed Afghan poppy cultivation as increasing from 64% of the world’s heroin production seven years ago to just over 92% today. It also estimated the number of Afghans involved in the whole production and distribution process as between 1.7 to 2.3 million. Over the same period the farm-gate price of dry opium at harvest time has fallen by 69%. The British military occupation of Helmand province has overlooked the largest expansion of the cultivation of poppy production now extending to over 70,000 hectares. In the context of imperialism, the “war on drugs” is just as fraudulent as the “war on terror”. In both cases capitalism is driven to use the decay of its system in order to prop up the self-same system. This has consequences that can be seen, unseen, debated or simply not cared about as far as the devastation caused to humanity is concerned. In early 2007, the UN estimated there were around one million opium addicts in Afghanistan, 600,000 under 15 and a growing number of women (Al Jazeerah, 17.5.07). Cheap heroin from Afghanistan is having a devastating effect on Iran, India, Russia the US, Canada and China, where it’s causing particular social instability, along with the consequences of AIDs and other diseases, prostitution and the elements of slavery that go along with it. In the major European states the effects of the misery are felt right up to the Scottish islands where newly unemployed fishermen, solid and strong members of the community, with compensation in their pockets, have fallen into the arms of Madame Joy. From one side of the world to the other, from the poorest to the relatively better off, cheap Afghan heroin is wreaking havoc. 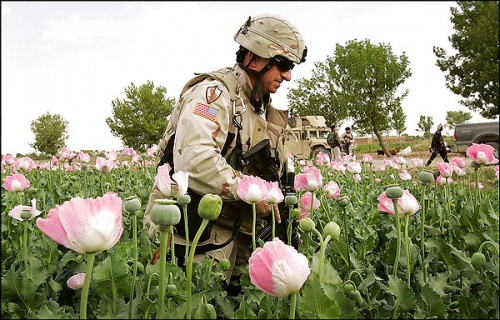 A week or two ago newspapers(also BBC, 12th September) were reporting a whistleblower talking about “large quantities” of opium being exported from Afghanistan on US, Canadian and British military aircraft. This is quite possible and doesn’t have to be a deliberate policy of the military, but it is a direct consequence of imperialism. When opium production in Afghanistan began to take off in the early 90s, rivalling Colombia and Burma in the heroin trade, the CIA funded and supported the Afghan drugs lord, Ahmed Shah Massoud. MI6 also armed and funded him and British intelligence taught his immediate entourage English[2]; prior to that the Russian KGB was involved with him as was French intelligence. Since the west’s direct intervention in Afghanistan from late 2001, Afghan poppy production has increased 33-fold. According to Britain’s ex-ambassador to Uzbekistan, Craig Murray in a 2007 piece in the Daily Mail, western intelligence agencies helped Afghanistan go from simple poppy farming to industrial-scale conversion into heroin with, needless to say, the direct implication of the Afghan state. The big change here is the export of heroin rather than opium and this needs large factories, volumes of chemicals imported, labour and a lot of transport to ship the refined product out (it’s one of the many ironies of Afghanistan that the west is paying the Taliban to at least partly watch over the transportation of refined heroin). Before 1979, very little opium came from Afghanistan to the west but then the CIA in its anti-Russian campaign trucked arms to Karachi one way from whence they returned laden with heroin (The Road to 9.11, UCP, 2007).

The role of imperialism’s secret services in the drug business has been detailed since World War II: the CIA and the Corsican mafia’s involvement in the cocaine trade in the late 40s – the famous “French Connection”; Burma, Laos and Thailand in the Golden Triangle where the CIA flew drugs all over south-east Asia; Panama in the 70s and US involvement with drugs through their puppet Noriega; Vietnam, where the CIA’s “Air America” flew drugs between Laos and Hong Kong; the cocaine trade in Haiti in the 80s; the Iran-Contra “guns in, drugs out” policy of the CIA and, more recently, the CIA’s rendition “torture taxis” being used to pick up and transport drugs through Gatwick and other European airports (The Independent, 17.1.10)with, one would think, the complicity of those states or at least a blind eye being turned. The CIA and the Pakistani secret service through the Bank of Credit and Commerce International, also used by British intelligence and Mossad, was a major factor in financing from opium profits the US, Pakistani, Saudi, British jihad against the Russians in Afghanistan in the 1980s.

This is just part of the extent of imperialism’s role in the drug trade and the abject hypocrisy of the “war on drugs”. From further back, in order to underline this point, we have the example of the Anglo-French Opium Wars against China. To quote Karl Marx from the New York Daily Tribune, 25.9.1858: (the) “Christianity-canting and civilisation-mongering British government... In its imperial capacity it affects to be a thorough stranger to the contraband opium trade and even enters into treaties proscribing it”. There’s nothing new under capitalism’s sun; thus we see British Prime Minister Lord Palmerstons’ “war on drugs” while conducting wars for the forced cultivation, propagation and sale of opium. Some of this was also sold to the working class in Britain under the benevolent title of “Godfrey’s Cordial”, an opiate used to dope children while both parents went out to work[3], raising a generation of opium addicts. While this was in some respects the “revenge” of China and India, the whole opium trade was totally irrational and at the expense of legitimate commerce. The East India Company ceased to become direct exporters of opium by the end of the 1700s but it became its producers, while the company’s own ships were sanctimoniously forbidden from trafficking the drug. Despite the attempts of the Celestial Empire to fight the importation of British production of Indian opium into China, Britain and Palmerston facilitated the “trade” by force of arms. Marx pointed to this irrationality and contradiction of the expansion of capitalism without moralising. But in the New York Daily Tribune, 20.9.1858, in an article titled ‘Trade or Opium?’, he quotes the Englishman Montgomery Martin: “Why, the ‘slave trade’ was merciful compared to the ‘opium trade’. We did not destroy the bodies of the Africans, for it was in our immediate interest to keep them alive; we did not debase their natures, corrupt their minds, nor destroy their souls (Well, just a little, B). But the opium seller slays the body after he has corrupted, degraded and annihilated the moral being of unhappy sinners, while, every hour is bringing new victims to a Moloch which knows no satiety, and where the English murderer and Chinese suicide vie with each other in offerings at his shrine”.

It’s been said that Marx supported the opium wars of Britain against China, but this isn’t true and could have come from a misreading from the Communist Manifesto about how capitalism’s cheap commodities “batter down all Chinese walls, with which it forces the barbarian’s intensely obstinate hatred of foreigners to capitulate”. In fact in this case it wasn’t cheap commodities but gunboats, artillery and opium – the latter cheap enough to give the East India Company and thus the British state a return of some 800% on volumes of this particular “trade”.

A final quote from Marx, from the newspaper article above, on the fanciful irony of this whole bizarre situation: “While the semi-barbarian stood on the principle of morality, the civilised opposed to him the principle of self. That a giant empire, containing almost one-third of the human race, vegetating in the teeth of time, insulated by the forced exclusion of general intercourse, and thus contriving to dupe itself with delusions of Celestial perfection – that such an empire should at last be overtaken by fate on occasion of a deadly duel in which the representatives of the antiquated world appears prompted by ethical motives, while the representatives of overwhelmingly modern society fights for the privilege of buying in the cheapest and selling in the dearest markets – this, indeed, is a sort of tragical couplet stranger than any poet would ever dared to fancy”.

Today, when the contradictions of capitalism are reaching screaming point and the relationship of imperialism and drugs are just one more expression of this, we are treated to the farcical couplet of the “war on terror” and the “war on drugs”.