There has been a great scandal in the media about the atrocious state of athletes’ accommodation and facilities at the Commonwealth Games site in Delhi: big name athlete’s pulling out, various teams delaying their travel or staying in hotels while they wait for the village to be brought up to standard. The Commonwealth Games ‘brand’ has been damaged!

But this pales into insignificance compared to the much greater scandal related to the construction – the conditions faced by workers at the site.

70 workers have died in accidents on the sites, and 109 on Delhi Metro construction sites, – but since many workers are not registered no-one knows what the real toll is. And this is hardly surprising:

“Workers often labour without elementary safety precautions, like helmets, masks and gloves. If workers are given boots, the costs of these are sometimes cut from their wages. Accidents were reported from almost all the sites, but these were rarely reported to the Commissioner, Workmen’s Compensation, and their legal reparation was withheld or diluted. Rarely are medical services available on site, beyond a first aid kit.” (The Hindu, 1.8.10)

The workers risking their lives are not even getting the legal minimum wage, “Workers are paid two-thirds or half of the minimum wage on all sites… and made to live in sub-human conditions,” said Shashi Saxena for the People’s Union of Democratic Rights (The Hindu, 16.8.10). In particular, they are working 10 to 12 hours a day, into the night, day in day out without any day off, and robbed of the pittance they are ‘legally’ due for overtime: Rs 100 (approx £1.50) for a 10 hour day, Rs 200 (approx £3) for a 12 hour day.

Living accommodation was described as ‘basic’ by the PUDR: insufficient toilets, lack of hygiene, sanitation deplorable, a breading ground for malaria and dengue fever, in huts made of tin and plastic sheets totally inappropriate to the extremes of Delhi weather – very hot in summer, cold in winter. And there is worse – the company Times of India Crest recruited a worker, Vijay, from a village. He arrived to find “The dug-up footpath where he was to lay the lovely pink stones would function as work place during daytime, bedroom at night”. 150,000 migrant workers were recruited to work on the project. Those that are responsible for children have no choice but see them living in these deplorable conditions, without any chance of school.

These dangerous conditions do not just apply to the Commonwealth Games, as the deaths of 43 textile workers in Kolkata in March illustrates (https://en.internationalism.org/ci/2010/workers-burn-india-shines).

Lastly, just as in Bejing for the Olympics, just as in South Africa for the World Cup, slum dwellers have been cleared out of the way for the big event, as though they were so much vermin. A night shelter was demolished last December leaving 250 homeless; a slum housing 365 Dalit Tamil families was bulldozed in April to put up a car part for the Games. Delhi Chief Minister Sheila Dixit admitted “We will have about 30 lakh [3,000,000] homeless in the city after the Games” (Outlook, April 2010).

India’s economy is predicted to grow by 8.5% this year, based on just this sort of fierce exploitation, “its private companies are strong. Indian capitalism is driven by millions of entrepreneurs all furiously doing their own thing” (The Economist, 2.10.10). That’s how capitalism likes it.

It has not translated into better conditions for the working class. The plight of workers on the Commonwealth Games site is just one example of the brutality of exploitation faced by workers. Permanent jobs are decreasing while casualisation increases, as at Hero Honda in Gurgaon, despite increasing production to 4.3 million bikes. Meanwhile the economy has seen job losses in textile and diamond industries. Unemployment stood at 10.7% in 2009, officially – the reality is much greater, as can be seen at any station or tourist attraction as dozens clamour for a few rupees to drive a rickshaw or sell a souvenir. These are people capitalism has failed to integrate into its production.

As more money has come into the economy prices are going up to those of ‘affluent’ economies, leaving workers struggling to afford essentials like transport, health, education, housing, let alone movies. Food inflation is officially 18%.

While the growth rates are high, the Indian economy has in no way escaped the conditions of declining capitalism that are threatening so many with recession. Growth has been fuelled by foreign institutional investors who were part of the casino economy before 2008. This pushed the debt-to-GDP ratio up 20 points, with public debt at 83% of GDP in 2007. It has been based on the service sector, with outsourcing of call centres etc. The country still lacks the infrastructure necessary for a large development of industry. The industry that has developed has been the like of small cheap cars, based on equally cheap labour, and destined for the home market of workers in the service industry. As the situation of farmers declines more are forced into the cities – or into suicide – even with the current high growth rates (see ‘The Indian boom: illusion and reality’). 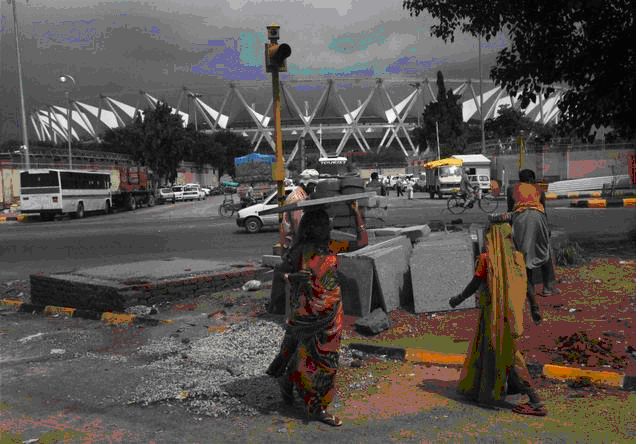 In any case the erection of large venues like the Commonwealth Games and the Olympic and other stadia for one-off, high profile events, often end up as an expensive white elephant and is not necessarily an indication of economic health.

The only answer is the struggle of the working class

It is impossible to read about the horrendous conditions faced by workers in India without indignation on a human level, clearly illustrated by the PUDR and CRY (Child Relief and You) which collected many of the statistics used in this article. However, the answer to these crimes does not lie in democratic reform – India is already a democracy and capitalism continues to trample workers underfoot; nor in legal protection for workers – the law is simply broken; nor in charity, however much that may help various individuals. Nor should we wait for the Indian economy to grow to provide better conditions, since the economy cannot stand apart from the rest of the world which remains crippled with debt, the very debt that is fuelling India’s economic growth.

It is important to understand that these conditions arise from capitalism itself, from the relentless struggle for profit. They can only be abolished by the overthrow of capitalism. Until then they can only be attenuated by massive working class resistance, such as the struggles of car workers in Gurgaon last year, of jute worker in Kolkata, of Air India workers, and of government employees in Kashmir who were able to unite to defend their interests despite the gun battles between the state and separatists (see our website). The only answer is the struggle of the working class.