In order to answer these questions we are going to compare the world's industrial production as it developed from 1913 to 1959 (including armaments production) with what would have taken place if industrial growth had continued after 1913 along the same rates attained during the decade 1880-1890. [3] (We will assume a constant rate of development. In reality, this rate would tend to increase under the influence of rising productivity). We are particularly interested in the period which began right after World War 2. The comparison with the hypothetical growth defined in the first example (above) will be completed by a second comparison with another example of hypothetical growth based on new growth rates made possible by the development of technology at the time of World War 2. In order to get a more precise idea of the extent of the decline we will start this hypothetical growth from the end of the war in 1946. For this comparison we have chosen as the growth rate which would have been attainable following World War 2 (if the capitalist relations of production had not hindered development), the rate which was reached by the United States industrial production between 1939 and 1944. The war had opened up important outlets for the American economy and thus enabled the productive apparatus to operate at its maximum strength. However, this rate is limited by the fact that such an immense growth in output involved a type of production which could not be reintegrated into production in order to accelerate, in its turn, further growth; namely, armaments. Moreover, this rate was realised in the United States at the same time that the other powers were war-torn: American economic growth, therefore, could not profit from technological development furnished by international collaboration. We are keeping this rate of growth nevertheless, because it has the virtue of having been actually attained at a given time and thus gives us an appreciation of society's actual technological capacities. The index of United States industrial production went from 109 to 235 between 1939 and 1944 ( 100=1938 ) which is a rate of growth of 110 per cent in five years, (see graph). 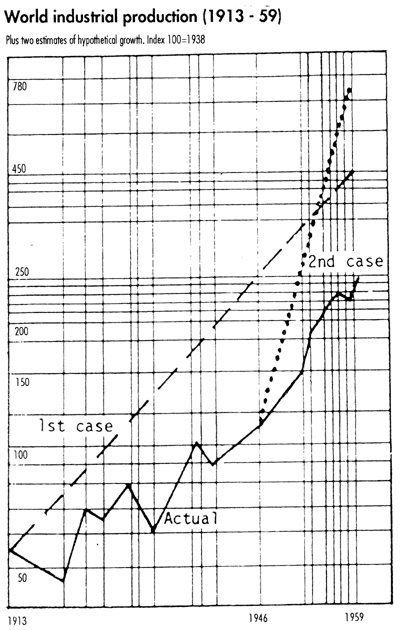 On the graph we can see the divergences which, in both cases, widen with growing rapidity. We can see, even more clearly, the magnitude of these slow-downs by recording their progression on a separate graph. (The first graph is scaled in semi-logarithms so the progression of the divergences is poorly shown.) 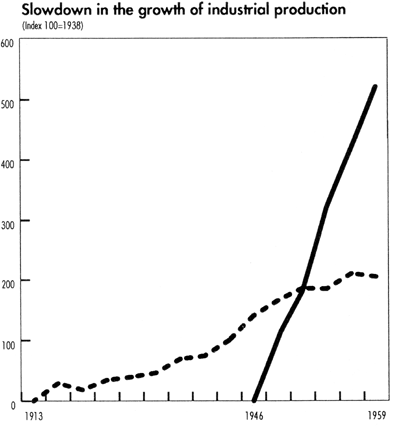 These graphs are only very approximate and give a picture which is probably an under-estimation of the actual extent of the brake on the rate of growth. However, they do give a clear idea of the unprecedented effectiveness of this brake, of its irreversible and inevitable character, as well as its uninterrupted increase. The periods during which the gaps are narrowed correspond to the periods of rearmament or reconstruction. Here their function as temporary palliatives clearly stands out.After the slowing down of the growth of productive forces, it is necessary to see whether capitalism after 1914 and especially after 1945 has been condemned to deeper and more widespread crises (the second characteristic of a society's economic decadence). This will lead us to examine the problem of the nature of armaments productions and its limitations. We will first consider the period 1914-46, followed by the period extending from the end of World War 2 to the present.