World War I marked a definitive turning point in two particularly significant aspects of capitalist expansion: imperialist expansion, and the proportional growth of the working class in society.

The end of capitalism's imperialist expansion

After its triumphant progress in the nineteenth century, its regular and irreversible conquest of one country after another, the imperialist expansion of the capitalist metropoles came to an almost total standstill at the beginning of this century. Capitalism had penetrated all countries and the different capitalist powers had entirely divided up the world among themselves.

World War I demonstrated the impossibility for any power to find a zone still untouched by capitalism in order to assure its expansion. Germany, which arrived relatively late for the 'conquest' was forced to provoke history's first world war in order to carve out a place for itself commensurate with its economic power. After the war, Japan and the United States, as we have seen, could assure their expansion only at Europe's expense.

After 1914, the world would be divided and re-divided according to the balance of power, but no really new geographic expansion could be carried out. Economic growth in capitalism's ascendant phase was characterised by the increasing importance of colonial markets in world trade. The importance of these markets continued to grow statistically from 1914-18. From 1914 to 1929 it only slowed down; from 1929 to 1938 it even slightly revived (see graph below). Only in the course of World War 2 was this tendency statistically totally reversed. But, in fact, this was only the result of a process begun in 1914.  The relative importance of the trade of third world countries during the inter-war period is mainly due to the dizzying fall of trade among the industrialised countries.

The 1914 war, in signalling the end of world capitalism's era of imperialist expansion, marked the beginning of a process of rapid shrinking of markets outside the capitalist system. 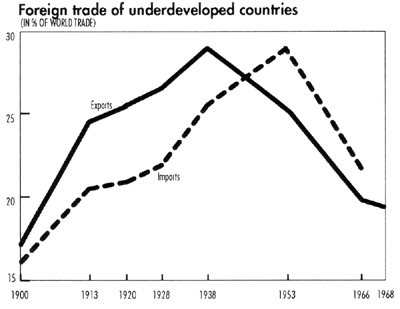 The end of the percentage growth of the working class

It is estimated that the proportion of the world population engaged in capitalist production was 10 per cent in 1850. This proportion reached nearly 30 per cent in 1914. But since the beginning of this century this expansion has greatly declined in the industrialised countries. The number of German workers rose from 8 million in 1882 to 14 million in 1925, but their proportion in the working population, after having reached 50 per cent in 1895, fell to 45 per cent in 1925. [1] "What was true of Germany was also true on an international scale. The working class percentage stabilised itself at round about 50 per cent; in England it was rather more, in France and Germany rather less." [2] This marked decline in the expansion of the 'principal productive force' continues up to the present time.In the most industrialised countries of the world, the proportion of "industrial workers, including construction workers", according to INSEE [3], in 1968 was only 47-48 per cent for Germany and England, 45 per cent for the whole of the European Economic Community, 35 per cent for the United States, USSR and Japan. These figures should be relatively higher since they exclude workers engaged in transportation, agriculture and fishing. But they undoubtedly prove that the rate of expansion of the working class has greatly declined since the end of the ascendant phase of the system after 1914.

In the underdeveloped countries this decline is even more pronounced. From 1950 to 1960 in Asia, Africa and Latin America, the number of new wage earners in every hundred inhabitants was 9 times lower than in the developed countries.Until 1914, the population effectively integrated into the capitalist economy grew faster than the world population. That was during the ascendant phase of capitalism. This tendency has, since then, been definitively reversed.

There was, therefore, a profound change in capitalism after 1914 and especially after 1929. Without doubt, the fundamental characteristic of this change is the end of imperialist expansion. Imperialism was, in effect, the principal outlet for 'ascendant' capitalism. This outlet absorbed the relatively small part of capitalist production, the surplus value destined to be reinvested, the realisation of which is indispensable for capital accumulation. We need only observe the radical upheaval which accompanied the end of imperialist expansion: two world wars and a crisis as profound as the one in 1929-38 in less than thirty years.

The period which World War 2 initiated cannot be situated outside the framework of the conditions which existed in 1914. As we have seen, colonial, or semi-colonial, markets greatly declined in importance during this period.

Many have considered this phase of expansion to be quite different from the period of quasi-stagnation in the 30s. The Trotskyists of the '4th International' have even used the pompous term, 'Neo-Capitalism', to characterise and thus indicate the importance they attach to the change in the economy.

In a few instances, growth rates since World War 2 have caught up with or even surpassed those attained during the ascendant phase of capitalism before 1913. This is the case for countries such as France or Japan. It is, however, far from being the case for the greatest industrial power, the United States (with 50 per cent of world production at the beginning of the 50s, [4] a 4.6 per cent average annual rate of growth between 1957 and 1965 as opposed to 6.9 per cent between 1850 and 1880 [5]. But the real nature of this growth is radically different from the expansion which was completed by 1913.

The principal fields of economic expansion since World War 2 have been: post-war reconstruction; permanent and massive armaments production; and better exploitation of old markets.

Only the 'better exploitation of old markets' is common to the two periods, but is is not a new development in the history of capitalism. Thus we should consider the major importance that this policy has acquired in the epoch when the discovery of really new markets is impossible.

Even though the third world markets have lost importance due to their insufficiency, their exploitation has, nonetheless, been continued as effectively as possible. Likewise, those powers still possessing internal 'extra-capitalist' markets (in particular, a still backward agriculture as in Japan, France and Italy) have proceeded to systematically integrate them since the war. But unlike the nineteenth century, this type of outlet had become much too limited for the needs of the 'natural' expansion of capitalism. It is like the life cycle of the water-lily whose size doubles each day : while it may have required a relatively long time to start growing and to eventually cover half of the pool, it needs only one more day to reach, in a single spurt of growth, the outer limits of its field of expansion. Each day's growth requires the area of the pool to be double what it was the day before. But since the total surface of the pool is limited in advance, the area which remains diminishes at the same rate as its needs of expansion increase.

At the beginning of the century, the mass of outlets which capitalism needed to assure one year of growth was more than six times less than that which is necessary for a year's production today. This ratio would be even larger if capitalism had had the same ability to expand after 1913 as before. But simultaneously, with the greater demand for new markets, the external outlets have contracted rapidly. Because of this, capitalism has had to resort to the palliatives of destruction and arms production to try to compensate for rapid losses in 'living space'.

A 'reconstruction economy' never appeared during ascendant capitalism. The inter-imperialist conflicts of that phase had nothing in common with the wars of the twentieth century. Those efforts of destruction never touched the centres of production. There was no 'reconstruction' because there was no real destruction. As for the production of armaments and military costs, their volume as well as their proportion of the national product of the great powers in the nineteenth century can hardly be compared with what they have become under modern capitalism.

"Hohenzollern Germany was regarded as definitely militaristic, and in the years which immediately preceded the first world war she greatly increased her military budget, which reached its culminating point in peace-time with what was then (1913) the huge sum of £100 million , inclusive of naval expenditure. But even then it represented only rather less than 4 per cent of the total national income which was then no less than £2,500 million." (Our emphasis). [6]

There is no possible comparison with the 10 per cent of the GNP devoted to military expenditures currently reached and often surpassed by the United States since the era of 'peace' after Word War 2, nor with the 20 per cent for the USSR.

Capitalism in the last decades, far from constituting a renewal of the ascendant phase which ended in 1913, appears instead to be the logical 'synthetic' outcome of the thirty years of decline which preceded it.

In effect, capitalism 'discovered' during these years of stagnation the economic 'benefits' of reconstruction and production for destruction.