From 1953 to 1969 the gross national product of the United States (calculated by volume and per inhabitant) multiplied by 1.4. Similarly the GNP in Italy and Germany multiplied by 2.1; the French GNP doubled, and the Japanese multiplied by 3.8. Where then is the 'decadence' of capitalism?

Even if a large part of this production is used only for military purposes; even if the gap between industrialised countries and underdeveloped countries grows, it seems obvious that 'the productive forces have not stopped growing'. Even if the evolution of political structures indicates the decomposition of the dominant value system, the development of class antagonisms as well as conflicts within the ruling class are all evidence of a 'crisis of civilisation' - a decline of capitalism at the superstructural level - it seems that many marxists find it difficult to speak of 'decadence in the capitalist system' when they see so much 'economic expansion'.

Marx wrote: "No social order is ever destroyed before all the productive forces for which it is sufficient have developed..." (Marx, Preface to a Contribution to the Critique of Political Economy)

A certain way of interpreting this passage led Trotsky, for example, to write at the beginning of his Transitional Programme (1938):"The economic prerequisite for the proletarian revolution has already in general achieved the highest point of fruition that can be reached under capitalism. Mankind's productive forces stagnate".

Trotsky was describing a reality that was more or less borne out by the statistics of the time. But apart from the realities of 1938, to prove that humanity has entered an age of social revolution and therefore the phase of capitalist decadence, must one hold that the productive forces have definitively stopped growing? And when twenty years later the same statistics show a relatively strong growth in world production must one then come to the opposite conclusion? In short, for a society to have irreversibly entered its period of decline, must the productive forces have entirely stopped growing? The problem raised by Marx in the Preface to a Contribution to the Critique of Political Economy is in fact the question of defining the economic conditions in which the passage from one form of society to another becomes possible.

Marx's answer can be summarised in this way: the relations of production which men enter into for the social production of their means of existence and which constitute the real basis of their society, correspond to a given degree of development of the productive forces. In the course of history, the full development of these forces necessitates important and repeated changes in these relations of production.

For a social form based on new relations of production to be viable, a corresponding evolution in the productive forces must have taken place. If these forces are not 'sufficiently developed', there is no objective possibility for a new system of production to arise and survive. The problem is to determine what 'sufficiently developed' entails, and what is the maximum development of productive forces for which the old 'social order... is sufficient' and which once attained makes a new society possible and necessary. The marxist response does not refer to any particular quantitative level, determined without reference to the economic mechanisms (zero growth included). On the contrary, it refers to a qualitative level of relationship which links the relations of production themselves and the development of the productive forces.

"At a certain stage of development, the material productive forces of society come into conflict with the existing relations of production or - this merely expresses the same thing in legal terms - with the property relations within which they have operated hitherto...Then begins an era of social revolution." (Marx, Preface to a Contribution to the Critique of Political Economy, our emphasis).

Marx's statement must be understood in this sense: a society never expires before the development of the productive forces has begun to be definitively checked by the existing relations of production. According to the marxist view, the period of a society's decadence cannot be characterised by a total and permanent halt in the growth of the productive forces but by the definitive slackening of this growth. Absolute halts in the growth of the productive forces do, in fact, appear during the phases of decadence. But these stoppages appear only momentarily in the capitalist system because the economy cannot function without a constantly increasing accumulation of capital. They are the violent convulsions which regularly accompany the progression of decadence.

All social changes are the result of the deepening and prolonged collision of the relations of production with the development of the productive forces. If we defended the hypothesis of the definitive and permanent halt in this development, the deepening of this contradiction could only be demonstrated if the outer bounds of the existing property relations were 'absolutely' receding. However, it happens that the characteristic movement of the different periods of decadence in history (including the capitalist system) tends rather in the direction of expanding these frontiers up to their final limits than towards their restriction.

Under the aegis of the state and under the pressure of economic and social necessities, the system's carcass swells while casting off everything that proves superfluous to the relations of production, everything not strictly necessary to the system's survival. The system is reinforced but at its last limits.

The freeing of the slaves under the Late Roman Empire; the freeing of the serfs at the end of the Middle Ages; the partial liberties which the declining monarchy had to grant to the new bourgeois cities; the reinforcing of the central power of the crown, and the elimination of the 'nobility of the robe' completely dominated by the king; and likewise, in the capitalist framework, the attempts at economic planning; the efforts to try to relieve the burden of national, economic frontiers; the tendency to replace bourgeois parasites with efficient salaried 'managers' of capital; policies such as the New Deal and the continued manipulation of certain mechanisms of the law of value - all are evidence of this tendency to expand the juridical framework by laying bare the relations of production. There is no halt in the dialectical movement after a society has reached its apogee. This movement is qualitatively transformed but it does not end. The intensification of the contradictions inherent in the old society necessarily continues and for this reason the development of the imprisoned productive forces must continue even if it is at the slowest rate.

From an economic standpoint, what characterises the decadence of a given social form is therefore:

- An actual slowing down of the growth of the productive forces with respect to the rates which would have been technically and objectively possible without the obstacle of the relations of production. This slow-down must have an inevitable and irreversible character. It must be caused specifically by the perpetuation of the relations of production which hold the society together. The discrepancy between actual development and possible development of the productive forces can only widen. This discrepancy thus appears increasingly clear to the social classes.

- The appearance of increasingly profound and widespread crises. These crises create the subjective conditions necessary for social revolution. In the course of these crises the power of the ruling class is profoundly weakened, and through the objective intensification of the necessity for its intervention, the revolutionary class finds the preliminary bases for its strength and unity.Our problem is therefore to find out whether these two phenomena characterise the capitalist system in the period from World War I to today.

Slow-down in growth of the productive forces since 1914

From 1914-1929 During World War I, production in the European countries decreased by more than one third and world production by 10 per cent. Never before had capitalism experienced such a decline in production .

Following the war and up until the 1929 depression, capitalism enjoyed a period of prosperity due to the reconstruction of the economies destroyed by the war and the completion of the expansion of the two young capitalist countries - the United States and Japan. But Europe lost its predominant place in the capitalist world and would never really recover from the collapse caused by 'the great war'. In spite of reconstruction, in 1929 Englandhad not yet regained its pre-war level of exports. Its position as world banker slowly eroded. Germany, the hardest hit, collapsed or stagnated. [3]Compared with the relative decline of Europe, the United States and Japan enjoyed an undeniable prosperity. Indebted to Europe at the beginning of the war, the United States came out of the war as Europe's creditor and, in addition, increased its production by almost 15 per cent. But this expansion was already suffering from the effects of a lack of markets: the sum of all the positive balance of payments during those ten years (1919-1929) was less than the amount of capital mobilised a short time before for the extension of the railways, (which was practically completed in 1919). [4] From 1919 to 1929, although the index of industrial production rose by almost 60 per cent, the number of workers decreased from 8.4 million to 8.3 million. From 1910 to 1924, 13 million acres of cultivated land reverted to prairieland, grassland or grazing land. In addition, the United States could no longer rapidly expand into new territories but only into zones already conquered by the warring powers, which meant 'dividing' those markets. The changes in the distribution of Argentina's imports from the big powers from 1919 to 1929 is, in this respect, particularly significant. [5]

The American share almost doubled while the English share decreased by almost half. The same thing happened with American expansion into Latin American and Canada. Japanese foreign expansion developed in the same way . In British India from 1913 to 1929, the British share of its imports fell from 64.2 per cent to 42.8 per cent while the Japanese share rose from 2.6 per cent to 9.8 per cent [6].

From 1929 to 1938 The Great Depression of 1929 was to the whole world what World War I was to Europe. This time world production fell by one third. The decline was three times greater than during the war; recovery would not be as rapid. World non-military production did not regain its 1929 levels until World War 2. Figures for world trade have already been given. Production in the leading world power collapsed.

Only the countries which had begun massive armaments production (Japan, Germany and the USSR) experienced a certain growth in their production.In view of the two extraordinary drops in production rates, linked together by a period of reconstruction and followed by a period of stagnation until World War 2, it is undeniably clear that the growth of the productive forces was drastically held back from 1914 to 1940. 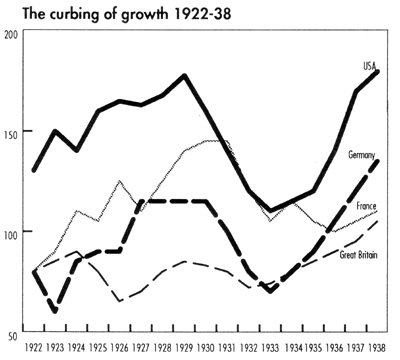 But does this slowdown mean that capitalism has definitively entered its decadent phase or is this a serious but temporary slowdown in a general growth cycle which was only interrupted at Sarajevo the better to begin again at Yalta?