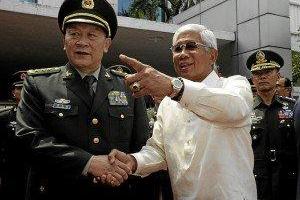 "Workers of the world, unite!" This is the truth and reality under a capitalist system. We, the workers have no national interest, or nationality to side with and defend as an internationalist class. Where ever and part of the world we may be, we are exploited and oppressed by the capital and the local state.

Patriotism and national interest serve only one particular class. History taught us that sovereignty, patriotism, and the state serve only the interest of the bourgeoisie, to control and exploit the working class and the rest of the toiling masses.

The current standoff at the Spratly islands between the Filipino and the Chinese bourgeoisie (both of which are claiming to own the small resource rich island) cries for "national sovereignty" and "territorial integrity". Calls for "national unity" and "defend national territory" reverberated. The bourgeoisie media is now poisoning the minds of the toiling masses, inculcating them that as one race and nation, capitalists and workers are brothers and allies.

The bourgeoisie has been injecting the workers of both countries "love for the motherland” to divide the workers, fight and kill each other.

Territorial dispute over the Spratly islands: a dispute to gain more profit and an inter-imperialist competition in Asia

The dispute over the Spratly islands is not exclusive between China and the Philippines. Other countries like Vietnam, Thailand, and Malaysia[1] squabbled with them, and Brunei[2] joined-in claiming for the resource rich island. The basis of each country is there long history of colonial aggression and not their "national sovereignty"[3].

To amass more profit is the foremost reason of each national bourgeoisie disputing over the Spratly Islands. Whoever wins over the current standoff, it will not be the toiling mass of China and the Philippines who will gain from it, but the government, bureaucrats, and the capitalists.

Another main reason is the imperialist interest of contending national bourgeoisies; the Spratly Islands is a thoroughfare which can be strategic for a military base, major reason, why China, Vietnam, Taiwan, and the USA are disputing over the Island. There have been frictions and armed conflicts for decades now, between China and Vietnam (a USA ally).

Clearly, this friction over the Spratly islands is part of the imperialist rivalry of China and of USA in Asia. There is a need for the ambitious imperialist China to expand its territory because of the global crisis of capitalism. The number one Imperialist power knows this, the USA, and it has given all of its effort to strengthen and guard its boarders in Asia[4].

The national capitals united against the working class

Despite inherent competition of different capitalist factions, national capitals are one in attacking the working class.

As nationalistic/patriotic ideology poisons the workers, diplomatic and economic cooperation amongst the contending countries continue[5]. As some sections of the population of these contending parties are defending sovereignty[6], their capitalists and state bureaucrats are feasting and in revelry with their counterparts in the Philippines, China and USA, talking how they could strengthen their economic relations. In other words, they are talking how to intensify their attacks against the proletariat.

National bourgeoisie of disputing countries extremely exploits and oppresses the workers. Hundreds of thousands of workers in China launched wildcat strikes or demonstrations almost every day against their state and capitalists. Strikes are happening in Vietnam because of low-wages and absence of benefits. Filipino workers face and experience the same issues. The hardships of the proletarians facing the "third world" are nothing different from the hardships of their brothers/sisters in the "first world” countries, particularly the USA.

The main and central objective of each national capital is to fan the flame of tension in order to gain the favor of discontented masses against foreign nation “trampling upon our sovereign right.”

Class unity and struggle against the poison of nationalism and patriotism

It is the capitalist class, local or foreign, the true and primary enemy of the working class.

We should not support the calls of our national bourgeoisie for "national sovereignty" and "defend national territory". The truth behind this calls is, it is the bourgeoisie’s sovereignty to exploit and oppress more the working class; it is the capitalist's territory to amass more profit from our free labor.

Instead, we should unite Filipino and Chinese workers together with our class brothers/sisters in the world to topple down our “own” national bourgeoisies. We must condemn the continued drum beating of our governments and threats of war; war that will only worsen our conditions and lead us to extreme poverty, death, destruction to property, and division among us.

We know that in the current standoff, none of the contending parties has the capacity or the interest to launch an all-out military confrontation and aggression[7]. However, the propaganda of a possible war may attract and influence sections of people who are relatively backward in their consciousness to support their local national bourgeoisie against a foreign bourgeoisie. The main and central objective of the national bourgeoisie of China and the Philippines is to poison the minds of the toiling masses with nationalist fervor and ideology.

Comrades, Filipino and Chinese workers, let us not be persuaded by these sweet talks and smooth speeches, and by poisonous propaganda of our "own" governments! Let us continue our struggle against all attacks of capital upon our ranks within our countries. Let us continue to expose the oppressive and exploitative nature of the capitalist class, local or foreign. We need to strengthen our unity as a class!

"National sovereignty" and "national unity" are chains that will keep us forever enslaved from this capitalist prison. These are devices divisive for the working class of the world. Movements with nationalist line are movements meant to weaken further the international proletarian movement.

Filipino and Chinese proletariats it is not our interest and we have nothing to gain whoever win and own the Spratly islands. Our interest is to free ourselves from poverty, from being wage slaves. Our interest is to end capitalism and build a society free from oppression and exploitation. Our enemies are the governments of the Philippines, Imperialist China, and all Imperialist countries[8].

Capitalism is the root-cause of wars in the era of imperialism. The only guarantee for humanity to have lasting peace is the total destruction of capitalism.

WORKERS OF THE WORLD, UNITE!

DOWN WITH THE CAPITALIST CLASS, LOCAL AND FOREIGN!

OVERTHROW OUR “OWN” NATIONAL GOVERNMENTS AND NATIONALIST IDEOLOGY!

DOWN WITH IMPERIALIST CHINA AND AMERICA!

DOWN WITH THE WORLD IMPERIALIST SYSTEM!

[3] Other than the International Law, The Philippines stand on their claim to own the Scarborough Shoal since the time of the Spanish colonialism (https://globalnation.inquirer.net/34031/ph-sovereignty-based-on-unclos-p...) while Vietnam since the time of French colonialism. And imperialist China base their stand along the same line.(https://en.wikipedia.org/wiki/Spratly_Islands#cite_note-encarta-23).

[4] With the balance of power between imperialist China and USA in Asia, North Korea is the only ally of China. This does not follow that USA is the prime enemy in Asia, and “secondary enemies” or "tactical allies" the other competing rival countries. The primary enemy of the world proletariat is the bourgeoisie of the world.

[5] The economic relation between the Philippines and China is continually expanding (www.mb.com.ph/articles/346111/robust-philippineschina-trade-relations), the same with China and the USA (https://www.census.gov/foreign-trade/balance/c5700.html). In fact, China is USA's biggest creditor (https://money.cnn.com/2011/01/18/news/international/thebuzz/index.htm).

[6] Cyber hackers of both China and the Philippines are destroying websites of their "enemy" country.

[8] The Philippine maoist movement helps the Filipino bourgeoisie campaigning for nationalist ideology amongst the ranks of Filipino workers. Maoists firmly held-on to the counter-revolutionary tactic of "chose the lesser evil, shown clearly through the statements of their legal organizations, about the friction between China and USA. (https://anakbayannynj.wordpress.com/2012/04/19/us-intervention-not-china-is-the-greatest-threat-to-peace-security-in-the-philippines-bayan-usa/). However, it is not only the Maoist movement has this thinking, all the rest of the left organizations are embracing the same bankrupt tactics.