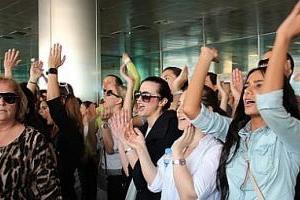 The world economic crisis is getting more on more destructive. The bourgeoisie needs the workers' labor more and more in order to strengthen its capital further. With the economic crisis deepening every day, the bourgeoisie started calling more and more for wars, barbarism and exploitation. And in a period as such, the bourgeoisie is increasing its suppression over the working class with its police forces, its governments and all sorts of organs. Preparations against the reaction of the working class is already being made in certain sectors.

The transportation sector is one of the life veins of capitalism. Because of this, the air transportation has an immense significance. So when the Turkish Minister of Economy Ali Babacan said “No offense to anyone, strikes will be banned in strategic sectors such as this one! For example imagine if there is a strike in a bank for three days, it would go bankrupt instantly... The fact that we are stopping strikes is among the elements which made the Turkish Airlines so successful. As a matter of fact I read in a foreign magazine, it said the Turkish Airlines is better than Lufthansa because there are no strikes”, he was clearly expressing not only the significance of this sector but also what was to come.

The working hours in the air transportation sector can go up to 16-18 hours in Turkey. Certain companies are even forcing the cabin crew to sleep in the same rooms to reduce the workers cost when they have to stay outside their hometowns. In a situation like this when the workers have to work for long hours having slept only 2-3 hours before at the expense of their health, social life and human needs, a right such as “the right to strike” has to be out of the question!

For years, strikes weren't banned in the air transportation sector in Turkey; and not a single significant and real strike was planned for the workers who had the right to strike. A strike wasn't declared when hundreds of workers were fired from the Sabiha Gokcen Airport in Istanbul. When Ali Babacan openly declared the governments intentions in the statement quoted above, in other words when the rubber met the road, the union which had done nothing when the workers were fired, when they were forced to work for low wages or for long hours, but when the union itself was losing its area of authority sent a message to workers titled “Urgenttt” declaring that the workers were to use their “not being ready for the flight” right. The workers, responded to the fact that the problems they were experiencing were their problems, answered the call and effectively went on a strike on May the 29th. What followed, the firing of 305 workers, a worker being left abroad because he was on an international flight when he got fired, the workers being text messaged by the company informing them that they've all been fired demonstrated the barbarism the Turkish Airlines was unleashing on the working class. And these attacks of the bourgeoisie were done hand in hand with the unions, who still had the nerve to claim to be workers' organizations. Like the Tek-Gıda-Is1 union in the recent TEKEL workers struggle and DISK2 in the workers' uprising of 15-16th of June 19703, Hava-Is, the air transportation workers' union was ready to play its role. The Hava-Is union didn't claim any responsibility for this action taken in the aviation sector.

Now it was clear for the workers that there was a need to struggle not only against the Turkish Airlines administration and the government but also the union they were members of. The May 29th Association, just like the Platform of Struggling Workers which followed the TEKEL struggle, formed by the airline workers as an organ of struggle independent from the union, took the task to deal with the unions attitude in the process and made the following statement: “The administration of the Hava-Is union we are members of played a large role in the declaration of this justified protest as 'illegal' by not even claiming responsibility for an action they themselves had called for. The bosses of the Turkish Airlines intend to take advantage of this ground and suppress all the employees and almost turn them into slaves. Was the Hava-Is administration so inexperienced that they couldn't foresee this outcome when they left hundreds of their members alone in the face of the Turkish Airlines administration? What sort of a union mentality is this?”4 What is significant about this statement is how it exposes the real face of the union these workers are members of, as well as its role.

To be sure, the Hava-Is union has set up a resistance tent in the Turkish Airlines. However the only people present are Atilay Ayçin, the president of the union, and a number of shop stewards and union officials. The bourgeois left which can't find enough words to describe how combative the chairman of the union is occasionally looks back at the tent and manages to ask the question “Where are the workers?” and the chairman of Hava-Is responds by complaining about how the workers aren't acting with him, thus continuing the game. These unions, who say “the worker pays the price if necessary” have never paid the price for anything in their existence; the chairman of the Turk-Is Confederation of which Hava-Is is a member of kept adding fortune to his fortune, and as they say, the workers paid the price in the Turkish Airlines strike as they did in the TEKEL struggle. Besides, as the May 29th Association says, it is the understanding of showing off which makes “a discrimination between workers who supported the struggle and those who didn't” when it comes to the aids to be given to the workers who 'paid the price'.

The bourgeois left claims that the union is in a position to unite the thousands of workers of the Turkish Airlines, while the May 29th Association is dividing the struggle. However the May 29th Association aims to extend the struggle in the interests of the working class as a whole amongst unionized and non-unionized workers alike and emphasized the importance of solidarity.

The public workers strike of May 23rd where 500,000 public workers participated also demanded the right to strike along with a demand for higher wages. The Turkish Airlines workers went on strike only for the strike ban; the main role played by the unions in both events was to isolate the ripened dynamic in order to prevent it from meeting with the other sectors of the class. In accordance with their role to divide the workers into sectors, the unions tried to melt down the energy present in these two struggles within sectoral limits.

The workers know that they can only rise the struggle with their own hands, what happens when those who aren't workers take the decisions and that the interests of themselves and the interests of the unions are antagonistic. The May 29th Association shows this to us. A significant note in the history of the working class in Turkey has been written by the workers of Turkish Airlines. And this note is that only organizations where the workers can take their own decisions can push the struggle forward. As the practice of the May 29th Association has shown, the workers are capable of coming together in the struggles and organize open meetings and mass assemblies; and these assemblies have to appear as the form of workers' self-organization in every real struggle if it is to succeed.

1The Union of Tobacco, Alcoholic Beverage, Food and Related Industry Workers of Turkey

3A massive workers uprising of the Istanbul proletariat where 150,000 workers took to the streets and clashed with the police and the army.