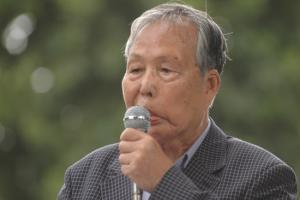 We have recently been saddened by the news of the death in hospital of comrade Il Jae Lee, a militant of the Left Communist Group in Korea: he was 89 years old.

Il Jae was born in 1923 in the town of Daegu, in what is now South Korea but which was known at the time by its historical name of Chosun. At the time, the whole of Korea was a Japanese colony valued for its raw materials and agricultural wealth, destined to support the war effort of Japanese imperialism. Official Japanese policy was to reduce Korean culture to the status of a folk curiosity; at school, children were required to learn Japanese, and Il Jae spoke Japanese fluently.

In the midst of the war, not yet 20 years old, he was already taking part in workers' struggles. With the departure of the Japanese occupying forces in August 1945, the country was reduced to chaos and in many places the workers took control of production themselves in what Il Jae described as workers' councils (the Changpyong, or Choson National Workers' Council) – though in the conditions of the time it was impossible for such councils to do much more than produce the bare essentials of life in a war-shattered country.

Il Jae joined the Communist Party in September 1946, and was a leading member of the general strike that broke out in Daegu during the same year. With the suppression of the workers' struggles by the US occupation authorities, Il Jae joined the partisans fighting in the south of the country, being wounded in the leg in 1953.

In 1968, under the dictatorship of Park Chung Hee, he was arrested and sentenced to life imprisonment for his continued political activity. His health was permanently damaged by his time in prison, and his face still bore the marks of the torture he suffered there. In 1988 he was released on probation, which did not stop him from involving himself immediately in political activity in Daegu. He became a leading member of the Korean Trades Unions in 1997.

For a young worker to enter the Communist Party in 1946 was perfectly natural. But no matter how sincere and courageous many of its members undoubtedly were, the Party in Korean was in effect no more than the tool of Russian and Chinese imperialism, then at the end of the Korean War, of a particularly grotesque and barbaric caricature of Stalinism: the hereditary dictatorship of the Kim family.

Had this been all there was to his life then we would not be writing this homage: history is full of heroism in the service of bad causes. But Il Jae was truly remarkable in being able, as he neared his 80th year, to call into question the struggle of a lifetime. In 2002 he became active in the Socialist Political Alliance, a new group which was beginning to introduce the ideas of the Communist Left into Korea. When a delegation of the ICC travelled to Korea in October 2006 to take part in the International Marxist Conference organised by the SPA, we met comrade Il Jae. In the debates during the conference, while we disagreed with him on many questions – notably the possibility of reviving the trades union as an organisational form for workers struggle – it was clear to us that we were in the presence of a real internationalist: above all on the key question of North Korea, he rejected any support for that odious regime.

In our discussions with him during his last years, comrade Il Jae was concerned above all with two questions: the international unity of the working class, and in Korea, breaking down the barriers between workers on permanent contracts, casual workers, and the immigrant workers from Bangla Desh and the Philippines who are beginning to appear in Korea. The latter question made him break with the recognised unions, although he still had not given up the hope of using the union form of organisation. He attended the ICC's 17th Congress in 2007, and had hoped to accompany an ICC delegation to Japan in 2008: sadly his declining health made it impossible for him to do so.

Comrade Il Jae Lee was an indomitable fighter for the proletarian cause whose spirit remained unbroken by hardship and prison. He remained an internationalist to the end of his life. Above all, he had the moral courage to continue searching for the truth, even if this meant calling into question the ideas for which he had fought and suffered in the past. The working class is poorer for his loss: it is richer for his example.