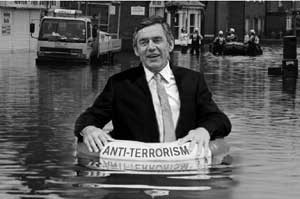 Two Mercedes packed with petrol, gas cylinders and nails parked in London’s West End and ready to be detonated. A jeep with gas cylinders crashes into a terminal at Glasgow airport. The targets? Clubbers with no ambitions beyond having a good night out, and holiday makers looking forward to flying away for a glimpse of the sun. Whoever planned the attacks is fully in tune with the ways of modern warfare, which makes its offensive on concentrations of civilians, whether in Dresden, Hiroshima, Baghdad or the Tiger Tiger club. In disregarding the likelihood of retaliation they’ve also shown their contempt for the effects on Muslim or immigrant communities.

One of those who were arrested in connection with the failed bombings was said by a friend to be “very angry about the West”. But creating spectacular carnage in crowded places is every bit an expression of imperialist conflict and has nothing to do with the struggle against the system that gives rise to war. On the contrary, the whole ideology of jihadism takes real anger and discontent and channels thembrown into militarism, imperialist war and suicidal self-destruction. Politicians and the media rant about extreme political Islam being a threat to ‘our values’, when in fact the individual bomber and the state air force share the same goals and the same means of terror.

All change with Brown?

With the attempted London bombings coming within hours of Gordon Brown’s appointment of his first cabinet, there was a prime opportunity for the new government to show that it was committed to the reinforcement of the British state. In contrast to Blair’s familiar rush to introduce emergency legislation, Brown was praised by the likes of Liberty director Shami Chakrabarti, because “He has not played politics with the terror threat”.

In fact there is already planned legislation that will be introduced before the end of the year and will possibly include: an extension of the time available for detention from 28 to 90 days, the use of phone tap evidence, longer sentences for ‘terrorist’ offences, the power to seize passports and carry on interrogations after charging, among a number a number of other measures. No new measures have been instantly proposed partly because previous governments have been so enthusiastic in strengthening the legislative and technological aspects of their repressive arsenals. From the record number of CCTVs installed, to the reinforcement of the security forces, to the fact that, in law, almost anything can be interpreted as ‘glorifying’ terrorism, the state has a very wide range of powers at its disposal, while still selling the myth of British democracy and its inherent sense of ‘fair play’.

But it’s not wrong to notice a slightly different emphasis in Brown’s approach. It’s not just that the new Home Secretary is allowed to say a few words, but that no one in government will be using the expression ‘war on terror’, and it will focus on specific groups such as al Qaida rather than unidentified ‘Muslim extremists’, while trying to win the battle for ‘hearts and minds’. Brown said “security measures have to be increased” and people should be prepared to accept a greater police presence. But he also said there should be an ideological campaign, similar to that throughout the period of the Cold War, aimed at defeating Islamic fundamentalism and bringing everyone into line with the values of British democracy.

This is always a priority for the ruling class. The attempt to unite the population behind the needs of their exploiters is a constant for every government, whether of left or right. Since the advent of Brown there has already been some movement from those who had previously been reluctant to openly side with Blair. For example, full page advertisements appeared in many papers on 6 July from ‘Muslims United!’, in which you could read that “We are united with the rest of the country at this critical time and are determined to work together to avert any such attacks targeting our fellow citizens, property and country” before going on to “commend the government for its efforts to respond to this crisis calmly and proportionately”.

The idea that we should all be united in defence of ‘our country’ is at the core of nationalism and against any emerging understanding that we live in a society divided into classes with antagonistic interests. Whether that nationalism is expressed by Gordon Brown demanding more opportunities to hoist the Union flag and crying ‘British workers for British jobs’, or by Iraqi insurgents trying to drive out the foreign infidel for the benefit of a home-grown ruling class, or by car bombers bringing the war to Britain, it is always an ideology of the ruling class.

In the face of terrorist attacks the main parties of the bourgeoisie tend to adopt a united front. The latest, if failed, attacks have provided the perfect ammunition for the ruling class’s continual campaign to rally citizens to the state. In that sense, the main beneficiary of the recent attempted bombings is the British state.

However, there are some groups that appear to dissent from the consensus over terrorism. The Socialist Workers Party, for example, was not wrong to observe that “Brown repeated Tony Blair’s claim that bombs in Britain are not a product of the carnage in the Middle East” (Socialist Worker 7/7/7). There is indeed a connection, a link between two theatres in an imperialist war. But when leading SWP member and Stop the War Coalition convenor Lindsey German declared that “What Britain needs is not more terror laws but a change in foreign policy” she is promoting a serious illusion, the idea that capitalist governments can adopt a friendly or ‘ethical’ foreign policy. British imperialism pursues a foreign policy that is enforced with military weight and resources from every part of the state because that is what every capitalist state is forced to do in defence of its interests. And at home every state has to deploy every means not only against foreign threats but against the menace of the class struggle, the struggle of a working class which has no shared interests with its exploiters.