Following the defeat of the world revolution, and the counter-revolutionary seizure of power by Stalinism in the USSR, the priority for the tiny internationalist groups that had survived the disaster was to understand the reasons for the defeat. This also meant understanding what a real transition to communism, and to some extent communist society itself, would look like. In these articles - which begin with a summary of the main ideas contained in the previous articles of the series - we concentrate on the efforts of the Italian Left in exile (around the Bilan group), and the Dutch and French Communist Lefts, during the dark years that before, during, and after World War II.

“The overall judgment we made of this tendency in recent issues of Internationalisme, however severe it might have been, was absolutely well-founded. We must however make a correction concerning its definitive character. The Chaulieu tendency was not liquidated, as we presented it, but found the strength, albeit after a very long delay, to break with the Trotskyist organisation and form itself into an autonomous group. Despite the heavy weight of this heritage on the group, this fact represents a new element that opens the possibility of its later evolution. The future alone will tell us to what extent it constitutes a gain in the formation of a new revolutionary movement. But right now we must say to them that they won’t be able to carry out this task unless they rid themselves completely and as quickly as possible of the scars they have inherited from Trotskyism and which can still be felt in the first issue of their review”.

The capitulation of anarcho-syndicalism, integrated into the Republican state in Spain 1936-37 did not go unopposed by proletarian currents inside and outside the CNT. To a greater or lesser extent all these groups were made up of working class militants who fought in the heroic struggles of July ‘36 and May ‘37. 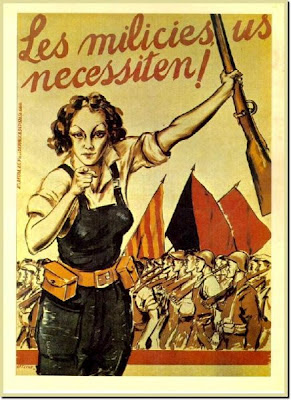 In the continuing series on the nature of communism, we are publishing the "Theses on the nature of the state and the proletarian revolution" written by the French Communist Left in the aftermath of World War II, with a brief introduction to put the Theses into the historical context of the positions of Bordiga and Pannekoek on the subject.

While it lacks the immediacy of the class struggle, the question of the transitional period towards communism following the revolution, and of the nature of communist society itself, has always been hotly debated in the workers' movement. One major effort to systematise an understanding the issue was the publication of the Dutch councilist group GIC in the 1930s: Grundprinzipien Kommunistischer Produktion und Veiteilung. We publish here an account of the Italian Left's critique of the Grundprinzipien.

After a delay which has been much longer than we originally intended, we are resuming the third volume of the series on communism.

This is the concluding section of the series on "Problems of the period transition" published in Bilan between 1934 and 1937.This article appeared in Bilan n° 38 (December/January 1936/7). It is the continuation of a theoretical debate that the Italian left communists were extremely keen on developing...

The following article was originally published in the November-December 1936 edition of Bilan (n°37), the theoretical journal of the Italian Fraction of the Communist Left. It is the fourth article in the series "Problems of the Period of Transition" by the Belgian comrade who signed his contributions "Mitchell". The previous three have been published in the last three issues of the International Review.

With this article from Bilan n° 35 (September-October 1936), the theoretical publication of the Italian left communists, we continue our re-publication of the series of studies on the period of transition by Mitchell. The previous article in the series began the discussion on the economic tasks of a proletarian dictatorship...
The article published below, which originally appeared in Bilan n° 34 (August-September 1934), is presented as a polemic with another internationalist current active at the time, the Dutch GIK, whose "Fundamental Principles of Communist Production and Distribution" had been published in 1930 and was summarised in French in Bilan by Hennaut of the Belgian group Ligue des Communistes Internationalistes.
In this issue of the International Review we are re-publishing the second article in the series “Problems of the Period of transition” by Mitchell, published in Bilan n° 31, in May-June 1936. Having laid out the general historical conditions of the proletarian revolution in the first article in the series, Mitchell traces the evolution of the marxist theory of the state, linking it closely to the most important moments in the struggle of the working class against capitalism – 1848, the Paris Commune, and the Russian revolution.
In the previous article in this series (International Review n127, “The 1930s: debate on the period of transition”) we began a study of the efforts of the Italian communist left to draw the lessons of the first international wave of proletarian revolutions and of the revolution in Russia in particular, and to understand how these lessons could be applied to the revolutionary transformations of the future... In this issue, we begin the publication of another major series on the same basic theme: “Problems of the period of transition” written by Mitchell, who at the time the series began was a member of the Belgian group the Ligue des Communistes Internationalistes but who subsequently helped to found the Belgian Fraction of the Communist Left, which split from the LCI on the question of the war in Spain, and with the Italian Fraction formed the International Communist Left. To our knowledge this is the first time this series has been published since the1930s and the first time it has been translated into other languages.
An in-depth article dealing with the question of the Period of Transition from capitalism to communism, as it was posed by the Italian Left in the aftermath of the defeat of the Russian revolution of 1917.
This article continues the series on the history of the theory of communism with a summary of the second volume in the series. We examine the lessons drawn from the practical experience of proletarian revolution and power in Russia and Germany at the beginning of the 20th century.

On the eve of the publication in book format of the first volume of our series "Communism is not just a nice idea", we summarise here the principle themes and ideas put forward in these articles.

The only future is communism

With this article, we are beginning a third volume of our series of communism, begun nearly 15 years ago. The second volume of the series (in International Review 111) ended with an end: the exhaustion of the international revolutionary wave which shook world capitalism to its foundations, and more specifically, with an audacious description of the communist culture of the future, outlined by Trotsky in his 1924 work, Literature and Revolution.