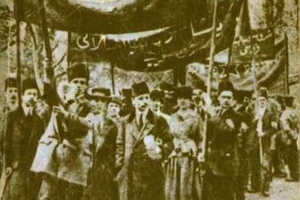 In 1889 the Second International was founded as a result of the attempts of the socialist parties of Western European countries such as Germany, France and Belgium to bring together different social democratic parties of the time. For the most part, the world communist movement of the future would emerge from this organization. While the Second International remained focused on Western Europe from its foundation to its collapse, and while it was designed from the start as a federation of national parties rather than a centralized structure, it was nevertheless to become a magnet for all the socialist movements of the time, from North and South America to the Far East.

Like their sister parties in Western Europe an overwhelming majority of the socialist tendencies organizing into parties outside Western Europe had their roots in the workers’ movement and gained strength on the basis of the workers’ movement. Although not to the same extent as in Western Europe, the conditions of capitalism in the period between 1890 and 1910 gave some of these parties the opportunity to become mass organizations. Consequently, the same opportunist, reformist and revisionist tendencies that affected the Western European parties also started to appear in the parties outside Western Europe. This in turn resulted in the formation of left wings in opposition to these tendencies in these parties also. Similarly, despite all of the elements claiming to defend the slogan of internationalism, there was no definitive test of which were true to the principles of internationalism and which weren't,. The workers’ and socialist movements to appear in the Ottoman Empire developed in the framework of this general situation.

Industrialisation, capitalism and the first workers' struggles in the Ottoman Empire

Unsurprisingly, the source of the bourgeoisie in the Ottoman Empire and of the expansion of capitalism into Ottoman lands was in its relations with the capitalist West. Again unsurprisingly, it was the extremely large and significant non-Muslim minority, with its closer relations to the West, which first introduced capitalist relations to Ottoman society. The development of the non-Muslim bourgeoisie in the Ottoman Empire was directly tied to Western capital, trade and patronage. The non-Muslim traders and shopkeepers of the pre-capitalist period, while not a particularly significant part of non-Muslim communities, became increasingly important by enlarging their businesses and accumulating capital in an environment where most of the riches came from the land and agriculture.1

Unsurprisingly yet again, this increasing social dominance of the non-Muslim bourgeoisie had its reflections in the ideological field as well, through the creation of schools to teach positive sciences even in the most remote villages, and spreading new bourgeois ideas such as liberalism and nationalism. Thus, for the first time in Ottoman history, as industrialization and capitalist relations began in the cities, bourgeois ideology was also being spread in the countryside. With the intensification of migration from the countryside, a working class was formed from the work force in the factories. However, the top level of the Ottoman state was not happy with these developments, which it saw as completely against its order and world-view, and its solution was to adopt extremely repressive measures. This resulted in the developing bourgeoisie sharpening the nationalist aspects of its ideology and led to the first national liberation struggles in the Ottoman Empire. Certain groups of the Ottoman non-Muslim bourgeoisie, like the Greeks, managed to lead successful national liberation struggles and form their own nation states. Other groups, however, the Armenians in particular, failed to create nation states because, unlike the Greeks, there was no special area where they were concentrated in the population. Due to this, the importance of non-Muslims in the industrial bourgeoisie of the Ottoman Empire continued and the politics of this rising force started to influence Ottoman politics. Both the non-Muslim bourgeoisie and the Western capitalism that supported it demanded certain reforms of repression in the Empire2.

These forces had an unexpected 'ally'; another force which had surprisingly similar demands. This was the Ottoman state bureaucracy. Following the failures of the Ottoman Empire in its attempts to compete with European states in the previous centuries, the idea of not only importing weapons but also technology, bourgeois ways of management, industry and science from the West in order to be able to compete began to develop among the state bureaucracy. In this sense, in an historically quite curious way, the base of the state symbolizing the ancien régime, started to radicalize, defending the capitalization of the society and even demanding a transformation to the democratic bourgeois state model. This was connected with the appearance of the seeds of capitalist relations within the Ottoman state.3 The most significant effects of this general situation were the independence of Greece (1829), Bulgaria (1876) and Serbia (1878), and the declarations by the rulers of the Ottoman Empire of the Imperial Edict of Reorganization (1839) and the 1st Constitutional Regime (1876). All this showed that capitalism was rapidly developing along two channels in the Empire - non-Muslim capital and the state bureaucracy. In addition, after the 1830s private industries also started replacing artisans among Muslims.4

Unavoidably the appearance of capitalist relations quickly resulted in class struggles by thousands of recently proletarianized people. From the 1800s there were protests in the factories. There were also demonstrations in several parts of the Empire against high taxes. Initially the most common action of the workers’ movement in the Ottoman Empire was sabotage of machinery, etc. Towards the end of the century these were abandoned in favor of strikes as more effective actions, but until these became more common, acts of sabotage continued. The government’s response was repression. The first recorded strike in the Ottoman Empire was in 1863, in the Eregli coal mines, but according to records strikes became widespread from the beginning of the 1870s. Industry was developing rapidly during this period and many experts and workers were sent out from countries like England, France and Italy. In February 1872, following a one day strike of English shipbuilding workers in Constantinople, telegraph workers in Pera went on strike. In April, workers on the Haydarpasha-Izmit railroad went on strike. All the workers struggled together, especially in the railway strike. In this way native workers with little or no experience of struggle were able to tie up with European workers, to discuss with them and gain first hand knowledge of the experiences of the European working class. These experiences spread from neighborhood to neighborhood, from coffee house to coffee house in working class areas. In January 1873, hundreds of native Christian and Muslim shipyard workers from Kasimpasha went on a week-long strike together. In 1875, native and foreign workers, this time numbering over a thousand, again went on a strike against horrific conditions of exploitation.5 1876 turned out to be a year in which very important workers’ actions took place at the heart of the Ottoman Empire. In Constantinople, workers in fez factories, arsenals, printworks and shipyards as well as tram and railroad workers of different ethnic backgrounds organized strikes and demonstrations. In Kocaeli, there was a railroad workers’ strike. In Izmir, striking sewing workers formed a workers’ committee - another first in Ottoman history. Thousands of workers participated in the strike wave of 18766. Strikes continued, albeit in decreasing numbers, until 1895. Sultan Abdulhamid II belatedly realized the threat posed by workers’ actions and his regime of repression was intensified after 1878, severely hitting workers’ struggles. While heavy repression could not stop strikes for good, for a while it did manage to make such action a rare event. But in 1902 the working class resumed its struggles in a more massive and militant way,7 and it was these experiences that led to the formation of the first socialist tendencies and militant workers’ organizations of the Ottoman Empire.

History of the workers’ movement