The crushing of the Taiping revolt led to a drastic worsening of the situation of the peasants. In the context of an increased burden of taxation, the destruction of the livelihood for millions of peasants and artisans, who went down under the weight of the import of foreign goods, forcing them to come to the cities where there was only a very weak industrial development – these economic fetters contributed to the outbreak of what was later to become known as the Boxer uprising. 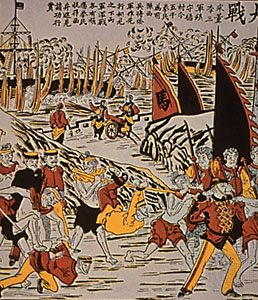 In May 1900 looting masses of dispossessed and frustrated peasants, led by a secret organisation of the Boxers blocked railway lines, ransacked factories and Western diplomatic missions. In an atmosphere of pogroms against foreigners, and in the absence of social and political demands, the Manchu dynasty took sides with the rioters, because their movement was not directed against any capitalist rule, but only against Christians and foreigners, offering no perspective whatsoever to the exploited classes.

At the moment when all the foreign missions were threatened by looters, the foreign imperialists united their forces to quell the movement. At the same time, this common intervention posed the question of a pecking order amongst the imperialists, because it was clear whoever took the lead in repressing the rising could become the dominant force in Beijing. The scramble for the leadership in the repression of the movement revealed a new qualitative level of inter-imperialist rivalries.

As Rosa Luxemburg in Reform or Revolution had already stated in 1899: “If presently China is becoming the stage for threatening conflicts, the struggle is not only about the conquest of China for European capitalism but fully fledged antagonisms between European countries have been “transferred” to China and they now erupt on Chinese soil...”.1

Britain wanted Japan to take the lead because it hoped that Japan would act as a counter-weight to Russia. Russia strongly opposed Japanese intervention. In the end, Russia accepted the German proposal for a German led intervention, as neither Great Britain nor Japan would have agreed to Russian leadership.

But before the German troops reached Beijing, Russian troops had already started (and almost completed) the massacre. Thus Russia used the Boxer rising as a lever for increasing its influence in China. In October 1900 Russia occupied the whole of Manchuria, in order to counter the extended influence of Western European powers in China. But Russia was unable to block the penetration of European powers and Japan. In view of the danger of China being torn into pieces by the European powers, in particular vis a vis Russian attempts to grab large parts of the northern part of China, Germany and Britain in August 1900 negotiated with the goal of maintaining the territorial integrity of China and maintaining the principle of an “open door”. Britain was hoping to use the Germans against Russia in Manchuria, Germany in turn aimed at pushing Britain and Japan into hostilities against Russia. Following increased Russian presence, Japan and Britain signed an alliance in January 1902, with the aim of containing a Russian threat. While all European states agreed to a US proposal of an 'open door' towards China, Russia, which had most to lose from this proposal, voted against this. Soon afterwards the USA joined the British-Japanese alliance against Russia. Hence one of the permanent characteristics since the early 20th century has been the USA opposing a strengthened position for Russia and Japan. They have always posed as a 'defender' of the weaker country (in this case China) to prevent Russia and Japan from becoming too powerful.

In 1911 the Chinese emperor was deposed and the first Chinese republic proclaimed. Formally the bourgeoisie had taken over the government to run the country. But while a bourgeois republic was now proclaimed, this did not mean that the country had gone through a bourgeois revolution, leading to the formation of a nation, able to compete on the world market. In reality, no ignition for a powerful industrial development occurred. Far from being a “united” nation, centrifugal tendencies gained the upper hand, as we shall see in the second part of this article.

Although formally in power the bourgeoisie was no longer a revolutionary class. Unable to push the country towards a big industrialisation, the ruling class could only push the whole nation into war and destruction.