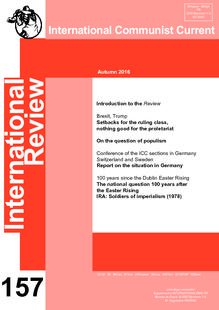 The summer of 2016 has been marked by signs of growing instability and unpredictability on a world scale, confirming that the capitalist class is finding it increasingly difficult to present itself as the guarantor of order and political control. The botched coup and subsequent wave of repression in Turkey, a strategically vital lynchpin of the global imperialist arena; the “blow back” of the chaos in the Middle East in the form of terrorist outrages in Germany and France; the intense political tremors provoked by the EU referendum result in the UK and the awful prospects taking shape with Trump’s presidential candidacy in the US: all these phenomena, so full of dangers for the ruling class, are no less threatening to the working class, and it is a major challenge to the revolutionary minorities within our class to develop a coherent analysis which cuts through the ideological fog obscuring these events.

It is not possible, in this International Review, to cover all these elements of the world situation. With regard to the coup in Turkey in particular, we want to take the time to discuss its implications and work on a clear analytical framework. For the moment we intend to focus on a series of questions which seem to us to be even more urgent to clarify: the implications of “Brexit” and the Trump candidacy; the national situation in Germany, in particular the problems created by the European refugee crisis; and the social phenomenon common to all these developments: the rise of populism.

We ourselves have been late to recognise the significance of the populist movements. Hence, the text on populism presented in this issue is an individual contribution, written to stimulate reflection and discussion in the ICC (and hopefully beyond). It argues that populism is the product of an impasse which lies at the heart of society; even if the bourgeois state is giving rise to factions and parties which are attempting to ride this tiger, the result of the EU referendum in the UK and Trump’s ascendancy in the Republican Party demonstrate that this is no easy ride and can even deepen the political difficulties of the ruling class.

The purpose of the article on Brexit and the US presidential elections is to apply the ideas of the text on populism to a concrete situation. It is also intended to correct an idea present in previous articles published on our site, that the Brexit referendum result is somehow a "success" for bourgeois democracy, or that the rise of populism today "strengthens democracy".

We also publish two historical articles on the national question, focusing on the case of Ireland. They are included not simply because we have reached the centenary of the 1916 Dublin rising, but because this event (and the subsequent history of the Irish Republican Army) was one of the first clear signs that the working class could no longer ally itself with nationalist movements or incorporate “national” demands in its programme; and because today, faced with a new surge of nationalism in the centres of the capitalist system, the necessity for revolutionaries to affirm that the working class has no country is more urgent than ever. As the Report on the German national situation puts it, overcoming the boundaries of the nation is the awesome challenge confronting the proletariat in the face of globalised capitalism and the false alternatives of populism:

“Today, with contemporary globalisation, an objective historical tendency of decadent capitalism achieves its full development: each strike, each act of economic resistance by workers anywhere in the world, finds itself immediately confronted by the whole of world capital, ever ready to withdraw production and investment and produce somewhere else. For the moment, the international proletariat has been quite unable to find an adequate answer, or even to gain a glimpse of what such an answer might look like. We do not know if it will succeed in the end in doing so. But it seems clear that the development in this direction would take much longer than did the transition from trade unionism to mass strike. For one thing, the situation of the proletariat in the old, central countries of capitalism – those, like Germany, at the “top” of the economic hierarchy – would have to become much more dramatic than is today the case. For another, the step required by objective reality – conscious international class struggle, the “international mass strike” – is much more demanding than the one from trade union to mass strike in one country. For it obliges the working class to call into question not only corporatism and sectionalism, but the main, often centuries- or even millennia-old divisions of class society such as nationality, ethnic culture, race, religion, sex etc. This is a much more profound and more political step”.