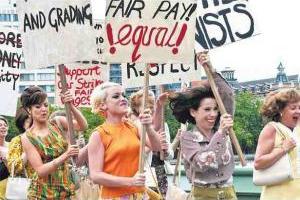 Why such a title today? Isn't it just a bit anachronistic? Here we are, after all, in the 21st century. Aren't women's rights, the equality of women, recognised in a plethora of conventions and solemn declarations throughout the world?

In reality, the question of woman's suffering in a society which to this day remains fundamentally patriarchal, continues to be of the greatest importance.1 Around the world, marital violence, ritual genital mutilation, reactionary and outdated ideologies like religious fundamentalism, continue to reign and even to develop.2

What the socialists of the 19th century called "the woman question" thus remains posed to this day: how to create a society where women no longer suffer from this particular oppression? And what should be the attitude of communist revolutionaries towards "women's struggles"?

One thing we should say from the outset: capitalist society has laid the foundation for the most radical change that human society has ever seen. All previous societies, without exception, were based on the sexual division of labour. Whatever their class nature, and whether the situation of women in them was more or less favourable, it went without saying that certain occupations were reserved for men, others for women. Men's and women's occupations might vary from one society to another, but the fact of this division was universal. We cannot study why this should have been the case in depth here: suffice to say that the division probably goes back to the dawn of mankind, and originated in the constraints of childbirth. For the first time in history, capitalism tends to eliminate this division. From the outset, capitalism transforms labour into abstract labour. Where before there was the concrete labour of the peasant or artisan, regulated by the guilds or customary law, now there is nothing but labour power, accounted by the hour or by piecework: who actually does the job is immaterial. Since women were paid less, they replaced male labour in the factories – this was the case, for example, of the weavers in the 18th century. With the development of machinery, work demands less and less physical strength, since human labour power is replaced by the vastly greater power of the machine. Today, the number of jobs still requiring male physical strength is extremely limited, and more and more women are entering domains once reserved for men. The old prejudices about women's supposed "irrationality" are dying away almost of themselves, and more and more women are to be found in the scientific and medical professions once thought only suitable for supposedly more "rational" men.

Under capitalism, at the turn of the 19th and 20th centuries, the demand to participate in public life was not limited to working women. Women of the upper and middle classes also put forward the demand for equal rights, and the right to vote in particular. This posed the problem for the workers' movement of the attitude to adopt towards the feminist movements. Whereas the workers' movement was opposed to all oppression of women, the feminist movements – because they posed the question from the standpoint of sex not class – denied the need for a revolutionary overthrow of the existing order by a social class made up of men and women: the proletariat. Mutatis mutandis, the same question is posed today: what attitude should revolutionaries adopt towards the women's liberation movement?

In an article on the struggle for women's suffrage published in 1912, the revolutionary Rosa Luxemburg made a clear distinction between women of the ruling class, and women proletarians: "Most of those bourgeois women who act like lionesses in the struggle against 'male prerogatives' would trot like docile lambs in the camp of conservative and clerical reaction if they had suffrage (…) Economically and socially, the women of the exploiting classes are not an independent segment of the population.. Their only social function is to be tools of the natural propagation of the ruling classes. By contrast, the women of the proletariat are economically independent. They are productive for society like the men".4 Luxemburg thus makes a clear distinction between working class women's struggle for the vote, and that of bourgeois women. She insists, moreover, that the struggle for women's rights is a matter for the whole working class: "Women’s suffrage is the goal. But the mass movement to bring it about is not a job for women alone, but is a common class concern for women and men of the proletariat."

The rejection of bourgeois feminism was equally clear for the Bolshevik Alexandra Kollontai, who in 1908 published The social basis of the woman question: "Class instinct – whatever the feminists say – always shows itself to be more powerful than the noble enthusiasms of 'above-class' politics. So long as the bourgeois women and their 'younger sisters' are equal in their inequality, the former can, with complete sincerity, make great efforts to defend the general interests of women. But once the barrier is down and the bourgeois women have received access to political activity, the recent defenders of the 'rights of all women' become enthusiastic defenders of the privileges of their class (...) Thus, when the feminists talk to working women about the need for a common struggle to realise some 'general women’s' principle, women of the working class are naturally distrustful".5

World War I was to demonstrate that this distrust described by Luxemburg and Kollontai was wholly justified. At the outbreak of war, the suffragette movement (movement for women's voting rights) in Britain split in two: on one side were the feminists led by Emmeline Pankhurst and her daughter Christabel who gave their wholehearted support to the war and the government; on the other were Sylvia Pankhurst in Britain and her sister Adeline in Australia, who split from the feminist movement to defend an internationalist position. During the war, Sylvia Pankhurst abandoned little by little any reference to feminism: her "Women's Suffrage Federation" became the "Workers' Suffrage Federation" in 1916, and in 1917 her paper the Women's Dreadnought changed its name to become the Workers' Dreadnought.6

Luxemburg and Kollontai accept that the struggles of feminists and women workers may from time to time find themselves sharing a common ground, but not that women workers should dissolve their struggles into the feminist movement purely on the basis of "women's rights". It seems to us that revolutionaries should adopt the same attitude today, adapted of course to the conditions of our own epoch.

We want to conclude with some thoughts about "equality" as a demand for women. Because capitalism treats labour power as a book-keeping abstraction, its vision of equality is also a book-keeping abstraction: "equal rights". But because every person is different, equality in law quickly becomes inequality in fact,7 and this is why ever since Marx, communists have never demanded "social equality". On the contrary, the slogan of communist society is: "From each according to his abilities, to each according to his needs". And women have one need which men will never have: to bear children.

Every woman should therefore have the possibility of bringing her children into the world, and of caring for them during their first years, without this contradicting either her independence or her full participation in every aspect of social life. This is a need, a physical need, that society must support; it is a capacity of women whose expression a society has every interest in encouraging, since society's future depends on it.8 It is thus easy enough to see that a truly human society, a communist society, will not try to impose an abstract "equality" on women, which would only be an inequality in fact. It will try on the contrary to integrate this specific capacity of women into social activity as a whole, at the same time as it completes a process that capitalism could do no more than begin, and put an end for the first time in history to the sexual division of labour.

1According to a French national inquiry into violence against women, published in the year 2000, "in 1999, more than 1.5 million women have been confronted with a situation of verbal, physical, or sexual violence. In 1999 about one woman in 20 suffered physical aggression, from blows to attempted murder, [while] 1.2% were victims of sexual aggression, from molestation to rape. This figure rises to 2.2% in the age group of 20-24" (cf. http ://www.sosfemmes.com/violences/violences_chiffres.htm)

2To take just one example, according to an article published in 2008 by Human Rights Watch, the USA witnessed a dramatic increase in violence against women during the previous two years. See (cf. http ://www.hrw.org/news/2008/12/18/us-soaring-rates-rape-and-violence-against-w...)

3It goes without saying that women have always worked. But in class societies before capitalism, their labour remained essentially in the private, domestic domain.

5https://marxists.org/archive/kollonta/1909/social-basis.htm. The "younger sisters" was the condescending term used by the feminists to refer to women of the working class.

6The name was a reference to a type of British battleship

7"Right, by its very nature, can consist only in the application of an equal standard; but unequal individuals (and they would not be different individuals if they were not unequal) are measurable only by an equal standard insofar as they are brought under an equal point of view, are taken from one definite side only -- for instance, in the present case, are regarded only as workers and nothing more is seen in them, everything else being ignored" (Marx, Critique of the Gotha programme).

8Obviously we are speaking here in general terms. Not every woman feels this need to the same degree, or even at all.