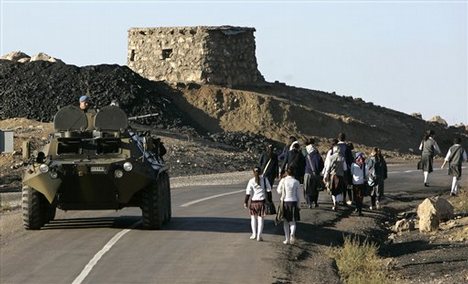 We are publishing below a resolution adopted on the developments in Kurdistan, adopted by the recent territorial conference of the ICC section in Turkey. Our resolution, aims to explain clearly who the millions of people encircled by this imperialist war are being forced to give their lives for. It is founded on our position that the only solution for the working class which is being forced into butchering its class brothers and sisters for the sake of the imperialist interests of different nations is class war on the basis of internationalism.

The Only Solution of the Kurdish Question is the Internationalist Solution!

1.    The Turkish state is a state which is pursuing imperialist interests both in Kurdistan and in the Middle East in general. The PKK[1], although it hasn't succeeded in becoming an actual state, is acting as the main apparatus of the nationalist Kurdish bourgeoisie in Turkey; it attempts to realize its interests in its area of activity as if it is an actual state and it is bound to rely on the direct or indirect support of this or that imperialist state the interests of which rival those of Turkish imperialism at this or that point. As such, although its forces are weaker compared to those of the imperialist Turkish state and its interests narrower, the PKK is as much a part of world imperialism as the Turkish state. This war which escalated in the recent months in Kurdistan is, like all the wars going on in all parts of the world, an imperialist war.[2] Dying or killing their class brothers or sisters for the interests of their masters is in the interests of neither the Turkish nor the Kurdish workers.

2.    The situation in Iraqi Kurdistan and in other Kurdish regions has changed with the entry of the United States into the region. Turkey is a power in the region, and a partner of the United States and so is also a partner of the relationships stemming from this situation. Also, the region is extremely profitable for the Turkish bourgeoisie. It has been demonstrated that the relationship between Southern Kurdistan[3] and the PKK can become tense as a result of certain pressures of the Turkish state. On the other hand, the pressure created by the Kurdish population forces the Southern Kurdish government to look after the PKK. A similar relationship doesn't exist between Iranian Kurdistan and Southern Kurdistan.

3.    The Kurdish question is completely tied up with imperialist politics in the Middle East. There are two aspects of this: The first is the influence of the United States, while the second stems from the fact that Kurds occupy a key position in the region. When we look at recent developments, it is possible to analyze the situation as regards the Turkish state as follows: while at times there is a partnership with the Southern Kurdish government, these relationships have shown a tendency to worsen at certain moments as well. In the background is the Nabucco project designed by the United States to pump oil to Europe, avoiding Russia. Following the November the 5th talks in 2007, Turkey's perspective has changed. While the perspective before the summit was advancing with completely military methods, afterwards a different course was taken under the guise of democratic reforms. Behind this lies the security of the Nabucco plan. There is a need for the normalization of this problem in order to stabilise the region. For this reason, it is desired for the problem between the Turkish and Kurdish bourgeoisies should be solved, as they have mutual long term strategic partners.

4.    Despite all this, what the AKP[4] government did beneath all the promises of reforms and talks of democracy was nothing but a continuation of the old policy of war. During the process, thousands have been arrested in the KCK trials[5], hundreds of Kurdish guerrillas were murdered while retreating during ceasefire, extremely heavy handed attacks by the police were made on Kurdish demonstrations resulting in the injury of many demonstrators and the deaths of several, social oppression was encouraged in Turkish cities against the Kurds living there, resulting in lynching attempts. Yet, while the AKP government's strategy remained the same as those of the previous governments, its tactics were significantly different. The AKP government pursued an ambitious plan of stalling the representatives of the Kurdish movement in Turkish politics[6] openly with intrigues and false gestures and the PKK in the background with negotiations, while continuing a policy of repression which essentially remained the same. The last part of the gambit was to be winning the support of the Kurdish masses by giving out different sorts of charity such as food, refrigerators, ovens and so forth and by using religious ideology. This, last point perhaps had been the most critical of the AKP government's plan, since like the rest of the Turkish state they had realised that it wasn't possible for them to defeat the PKK by military force alone. For this reason, they had aimed to become a force first rivaling and eventually surpassing and marginalizing the PKK in Turkish Kurdistan; yet this intrigue, worthy of the old Ottoman empire, ended up exploding in the government's face.

7.    The Turkish bourgeoisie also wants to create a new image for itself. This includes turning Turkey into a heaven for cheap labor. Needless to say, an important part of this is made up of the Kurdish working class. The current period is one in which attacks on the living and working conditions of the working class are being prepared, especially with the new measures in the public sector. By trying to give the image of a social state, surplus value is being increased. An example of this is the fact that the Ministry of Work is planning a new law which will make it a necessity for every worker to be unionized. A potential for surplus value not used well (!) enough exists in Kurdistan. Kurdish workers are working for very low salaries in numerous sectors. The implementation of this cheap labor policy in Kurdistan is being prepared with the new regional minimal wage policy.

[1]    Kurdistan Workers Party, a former-Stalinist Kurdish nationalist organization based in Turkey but also operating in Iraqi and Iranian Kurdistan.

[2]    The escalating war in Turkish Kurdistan since the May of 2011 claimed the lifes of hundreds, perhaps thousands of guerrillas, soldiers and civillians and included the armed conflict between the PKK and the army as well as bomb attacks in the cities by the PKK and numerous aerial strikes by the army. Among the civillians dead especially due to aerial bombings are dozens of children.

[3]    The Kurdish Regional Government in Southern (ie Iraqi) Kurdistan, lead by Masoud Barzani is basically a semi-independent state today with its own officially and legally recognized army, police force, intelligence agency, flag, parliament, national anthem, airlines and so on.

[4]    Justice and Development Party, a center-right populist party which can be appropriately described as a Muslim Democrat party in the fashion of the European Christian Democrats. Close to other moderate islamist parties in the Middle East such as the Justice and Development Party of Morocco, the Freedom and Justice Party controlled by the Muslim Brotherhood in Egypt, the Renaissance Party in Tunisia among others.

[5]    KCK or the Democratic Confederation of Kurdistan is the alleged urban organization of the PKK. In reality, the KCK can be explained as the proto-state of the Kurdish nationalist movement based in Northern Kurdistan. Technically, the KCK includes the PKK which is said to be its guiding ideological power; PJAK or the Free Life Party of Kurdistan, its organization in Iranian Kurdistan; PÇDK or the Democratic Solution Party of Kurdistan, its organization in Iraqi Kurdistan; HPG or the Popular Defence Forces, the armed forces of the KCK; Kongra Gel or the Popular Congress, its parliament formation among numerous other organs and organizations assuming numerous different functions of a state. The KCK trials can effectively be described as a Kurdish Scare.

[6]    In other words BDP, or the Peace and Democracy Party, the latest name of the ill-fated legal Kurdish nationalist political party in Turkey which had been forced to change its name over and over again since its first formation as the Popular Labor Party in 1990. A significant amount of the KCK detainies are members of this party. The BDP managed to get 36 candidates elected as independents in the last parliamentary elections, although a number of their elected candidadtes weren't allowed to become MPs for being in prison, adding fuel to the tensions.

[7]    Such as the army and the secularist bureaucracy.

[8]    A symbol of the Kurdish nationalist movement, Leyla Zana is currently an independent MP in the Turkish parliament, not allowed to join the BDP with whose support she was elected because she still has a political prohibition. Previously elected as a deputy in 1991, Zana obained international fame following her arrest directly from the Turkish parliament in 1994, for the crime of speaking a sentence in Kurdish in parliament and was sentenced to spend fifteen years in prison although she was released in 2004. She is known for having closer ties to the Kurdish nationalist leaders such as Barzani in the Iraqi Kurdistan than most people in the Kurdish nationalist movement in Turkey.