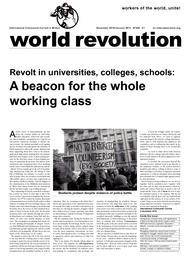 Revolt in universities, colleges, schools: A beacon for the whole working class

This article is available here to download and distribute.

A whole series of demonstrations up and down the country, strikes by university, Further Education, sixth form and secondary school students, occupations in a long list of universities, numerous meetings to discuss the way forward... the student and pupil revolt against the rise in tuition fees and the abolition of EMA payments is still on the march. Students and those supporting them have come to the demonstrations in high spirits, making their own banners and their own slogans, some of them joining protests for the first time, many of them finding new ways of organising the protests. The strikes, demonstrations and occupations have been anything but the tame events which the trade unions and the ‘official’ left are usually given the job of marshalling. Spontaneous walk-outs, the taking of Tory HQ at Millbank, the defiance or creative avoidance of police lines, the invasion of town halls and other public spaces, are just some expressions of this openly rebellious attitude. And the disgust at the condemnation of the Millbank demonstrators by NUS chief Aaron Porter was so widespread that he has had to make a grovelling apology.

This outpouring of barely-controlled resistance has worried our rulers. A clear sign of this is the level of police repression used against the demonstrations. On 24th November in London, thousands of demonstrators were kettled by the police within minutes of setting off from Trafalgar Square, and despite some successful attempts to break through the police lines, the forces of order detained thousands of them for hours in the cold. At one point mounted police rode directly through the crowd. In Manchester, at Lewisham Town Hall and elsewhere, we have seen similar displays of brute force. The newspapers are playing their usual role as well, printing photographs of alleged ‘wreckers’ after Millbank, running scare stories about revolutionary groups targeting the nation’s youth with their evil propaganda. All this shows the real nature of the 'democracy' we live under.

The student revolt in the UK is the best answer to the idea that the working class in this country is going to passively put up with the torrent of attacks being launched by the new government (in continuity with the previous government) on every aspect of our living standards: jobs, wages, health, unemployment and disability benefits as well as education. They are a warning to the rulers that a whole new generation of the exploited class does not accept their logic of sacrifice and austerity. In this they are echoing the massive struggles which have shaken Greece, France, and Italy, and which are threatening to explode in Ireland, Portugal and many other countries.

But the capitalist class, facing the deepest economic crisis in its history, is not just going to cave in to our demands. Not ideology, but the very material logic of their dying system compels them to make these attacks. And to force them to make even the most temporary concessions, we have to realise their greatest fear: a working class that is organised, united, and conscious of what it is fighting for.

This is no utopia. It’s already taking shape in front of us. The capacity for self-organisation can be seen in the initiatives of demonstrators on the streets, and the insistence on collective decision-making in occupations and meetings, the rejection of manipulation by would-be bureaucrats, however ‘left wing’ they claim to be. The tendency towards the unification of the working class can be seen when teachers and lecturers, parents, pensioners, workers from other sectors or the unemployed take part in general meetings in the occupied university buildings or join the student demonstrations, when students go to the picket lines of striking tube workers. Consciousness about the goals of the movement can be seen both in the formulation of clear demands for today and in the growing recognition that this society cannot offer us a human future.

But we also have to discuss how to take these efforts further, because they are just the beginning. In our view – which we think is based on the experience of both past and present struggles of the working class – there are some concrete steps that can be taken right now, even if their exact form may vary from place to place:

·         To keep the struggle under our control, to make sure decisions are made collectively and not imposed from above, we need to organise mass meetings in the schools, college and universities, open to both students and employees. All committees and co-ordinations that speak in the names of these meetings have to be elected and recallable;

·         We need to make direct links between different schools, colleges and universities. Don’t leave it in the hands of the union apparatus or self-appointed leaders;

·         To broaden the movement beyond the education sector, students need to go directly to the employed workers, to the nearest factories, hospitals and offices, calling on them to come to their meetings, to join their occupations and demonstrations, to walk out alongside them and bring their demands into a common fight against austerity and repression.

David Cameron keeps telling us: we are all in it together. And he certainly is in it ‘together’ with his class and its state and its parties, which includes the Labour Party just as much as the Lib Dems and the Tories. All of them are in it to save the capitalist system at our expense. But we are in it together with all those who are exploited and oppressed by this system, in every country of the world. Today we are in it to defend ourselves from being exploited even more. Tomorrow we shall be in it to end exploitation altogether.