A living movement of struggle follows many twists and turns. Flying pickets, barricades, blockades occupations, leafleting, spontaneous demonstrations, etc., are familiar expressions of class action, and we can expect the working class to conjure up others in its future combats. But at the heart of every struggle there is unavoidably the general assembly or mass meeting. It’s where we can discuss, debate, and agree together the way forward. The assembly/ mass meeting is THE place where the workers’ struggle can be discussed openly and decisions can be reached collectively. And it’s for this reason that there is always a great risk of all kinds of sabotage. 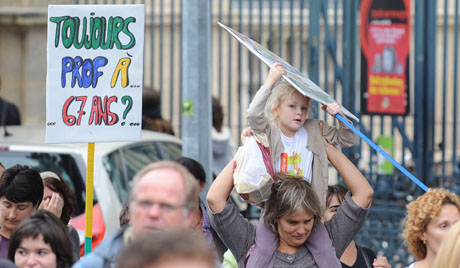 The banner reads: “still teaching at 67?”. Workers in France, as elsewhere, are being asked to work many more years before getting a pension

The assemblies, lungs of workers’ struggle

When the struggle is not active, the unions hold many humdrum meetings of their own. They are all very much the same. Firms all allocate time for union meetings which are conducted by the ‘officials’ who discuss among themselves with a few rank and file unionists or non-unionists as on-lookers who get asked their opinion from time to time. Not surprisingly, these meetings attract few people. Most workers have no interest to them.

When the struggle breaks out, like it has recently, the unions adapt and play a different game:
• Insofar as they can, they restrict discussion to as few people as possible. Either they do nothing at all or they sneakily keep publicity to a minimum.
• Sometimes, the anger in the proletarian ranks boils over. Then, to avoid the appearance of impromptu meetings and discussions outside their control, the unions call an array of meetings. But these meetings are organised sector by sector, plant by plant, trade by trade ... And in this way the unions orchestrate divisions, carve things up, disperse and dissipate energies, instead of strengthening and unifying class forces. Currently, on the railways, there are specific meetings for the train crews, the station staff and the office workers ... In some hospitals in the Toulouse region, the sabotage borders on the ridiculous: each floor has separate meetings!
• The unions will resort to all sorts of dirty tricks to keep control of these meetings. At the Gare de l’Est in Paris, a mass meeting was scheduled for Thursday, October 14th, in the morning. The railway workers were faced with deciding collectively whether to continue the strike or not. But eventually, the union officials revealed they had decided this vote amongst themselves the day before, Wednesday 13th. There was no reason to attend en masse for the assembly on the Thursday because the decision was already taken. And indeed, hardly anyone was present on that day. That’s how to kill the collective life of the working class in its struggles! That is union sabotage according to the rule book!

In its article “What is a general assembly?”, the CNT-AIT of Gers (Sia32.lautre.net) very correctly describes many other “dangers for the general assemblies”:
• “Monopolising debate: the assembly is not democratic. The classic case is that of the union official appointing himself to the role of chairman, participating in the discussions by answering back or systematically giving his opinion. [...]
• Undemocratic practices of the assembly: votes are not respected. Agendas are manipulated and votes are called for on several occasions when decisions have already been taken, exhausting everyone in the process. Often, at the end of meetings there are conclusions that destroy the coherence and forwards dynamic.
• Neutralising the assembly: no matter how rich the meetings have been, there is no capacity to build on what has been achieved because no follow-up meetings are arranged. Often the assembly of striking workers is made to look like an echo chamber for workers to register their anger, which nullifies their revolt by transforming their desire for direct action into so many empty words.”

Real workers’ assemblies must be the exact opposite

They must immediately break with all sectoral or corporatist divisions. They should be open not only to every employee, no matter what category they fall into, but also, and especially, to workers from other firms, to the retired, to temporary and unemployed workers, to college and high school students... to all those who want to participate in the extension of the movement and ask themselves “How do we fight back?”. And again, as the anarcho-syndicalist organisation from Gers writes:

“The Assembly is democratic, and therefore guarantees everyone an equal chance to speak in the time slots and space provided for the different discussion topics. This chance to speak is guaranteed under a mandate entrusted to the Chair. [...]
• The Assembly takes decisions, and these decisions take place by a show of hands [...].
• The Assembly is durable, its details recorded by a secretary appointed when the meeting starts who is responsible for recording and distributing the debate details and decisions of the Assembly. It also plans the date and place of the next Assembly.”

These last points are crucial. An Assembly is really not just an “echo chamber for workers to register their anger.” It is much more. Obviously this is a place for speaking, in fact it is one of the only places where workers can really express themselves. But the Assembly is also the place where the working class can unite:
• This is where our class can take collective decisions. It is therefore essential that holding such a meeting takes place through the adoption (voted by show of hands) of written texts and eventual actions.
• This is where it can decide upon and organise the extension of the struggle, by going itself or by sending massive delegations to places (factories, office blocks, hospitals ...) where it can call on workers’ who are the closest geographically and the most combative to join them in the struggle.
• And this is how coordination between the different sites and sectors in the struggle is built. Indeed there must be coordination between the general assemblies by their own committees, by elected delegates, fully answerable to them and therefore revocable at any time.

The current attacks on pensions have demonstrated the depth of the workers’ anger, the scale of unrest, their determination and ability to mobilise en masse. But our class has not yet managed at the current time to actually organise itself collectively in the struggle with sovereign and autonomous assemblies. This is the prime weakness of this struggle. This is the step the proletariat must of necessity take in the future if it is going to take proper control of its struggles and demonstrate its unity and solidarity against capital.