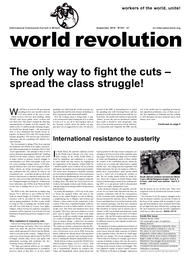 The only way to fight the cuts – spread the class struggle!

We will have to wait for the government spending review next month to find out a lot more detail of the cuts to come – which services will lose most funding, which 500,000 (and more) public sector workers will lose their jobs. This hasn’t stopped the drip-drip announcements of attacks over the summer. The attack on the 2.5 million people claiming incapacity benefit has already begun – the government aims to have eliminated this benefit stream altogether by March 2014 with 30% being denied benefits altogether, 50% moved onto Jobseeker’s Allowance and the remaining 20% shifted onto other benefits.

The Government is taking £74m from regional development and £200m from higher education, just when young people are turning to this for lack of job opportunities. The attempt to find 10-20% cuts in education spending has killed the ‘building schools for the future’ scheme, which will result in larger classes as primary schools struggle to accommodate over 4000 extra pupils in the next few years resulting in larger classes. 1,300 playground schemes have also been scrapped. Meanwhile, schools are being encouraged to convert into academies and ‘free schools’ in order to cut centralised costs – costs that should not all be put down to bureaucracy as education authorities also provide vital services that individual schools cannot. Transport budgets are being cut - £309m from local authorities and £100m from Network Rail, on the way to finding cuts of over 25%. And so on.

The NHS on the other hand has its budget ring fenced. Yet it still has to save £20bn by 2014, from an annual budget of £104.6bn, as no extra resources will be provided for new treatments and an ageing population. In other words, health is being cut like everything else. Scottish hospitals will lose 1000 beds in 3 years. Ever tighter budgets, with no leeway for expensive emergency treatment, will be imposed. A new North Tees and Hartlepool hospital has just been scrapped to save £450m.

Why capitalism is imposing cuts

Cuts are not being imposed just because of government ideology and policy. They were already under way under the previous Labour government, which announced £11bn in cuts last March. And it is not just in this country – budget cuts are under way across Europe and not just in the PIGS (Portugal, Ireland, Italy, Greece and Spain with particularly worrying debt problems) but also Germany, France, Romania and so on.

The huge government deficits are not simply due to individual mismanagement or corruption, however much of that there is. In fact, deficit spending was what kept the world economy going artificially until the risk of states defaulting on their repayments made them unaffordable.

Now the working class is being made to pay. Lots of democratic spin is being put on it, to make it look as if we are all in this together, such as the Treasury website where the public can suggest and vote on suggestions for cuts. The director general of the BBC is discussing how to report the spending cuts with Downing Street, and has promised to hold similar discussions with the Labour Party. The media will continue to take up the ‘debate’ on how the cuts are introduced, whether they could or should be more progressive, take more or less from the poorest in society. But however democratic and ‘impartial’ the BBC and the rest of the media may be regarding government and opposition politicians, none of them can admit that capitalism is bankrupt and has nothing to offer humanity but more financial crises, more misery, more wars.

The difficult fight back

Cuts today have an air of inevitability about them in a way they didn’t in the 70s and 80s, after two decades of post-war growth. Now we have the experience of the 1970s, the Labour government with its Social Contract to keep wages down in a period of high inflation, the growth of unemployment to a million; then the Thatcherism of the 1980s with more cuts, with closure of much of the steel and mining industries among other things, along with cuts in public expenditure and the growth of unemployment to 3 million, before they changed the way the figures are counted. We also have the experience of the defeat of the miners’ courageous year long strike which seemed to demonstrate the futility of fighting these attacks. These attacks have continued ever since, even with the last Labour government and its stealthy attacks on benefits, its plans to raise the pension age, all of which have recently been accelerated.

But we dare not just put up with the new attacks, for the easier it is for the government to impose them, the harsher they will be.

Difficult as the struggle is we must avoid the siren call of quick fixes, or any political campaign that relies on the Labour Party or the trade unions or other prominent public figures. For example, the Coalition of Resistance, launched by Tony Benn, wants to “develop and support an alternative programme for economic and social recovery”; sowing the illusion that capitalism can have such an alternative policy. Supported by many Labour MPs, it asks us to rely on the very political forces that were in government and supervising the attacks until only 4 months ago!

An alternative of Anti-Cuts Committees based on trades councils is proposed by others including Workers’ Liberty and Socialist Unity. Meetings have been held where speakers from the platform or the floor can describe very well the level of attacks that we can expect, and make rousing calls for action. Stalls will be set up to campaign for this. Promises are made to oppose every cut, to support each other’s actions. The only problem is where is this call coming from? The trades councils are the local trade union bodies, the very same trade unions that time and again keep workers divided. Have we forgotten that the NUT could call a strike and tell teachers in Sixth Form Colleges to continue working; that workers in the same schools in different unions or doing different jobs were told to cross each other’s picket lines? When push comes to shove, the exponents of the legal (i.e. ineffective, isolated) struggles and negotiation can only act on behalf of the capitalist class.

We cannot rely on these forces to struggle against the cuts. We can only rely on the struggle of the working class. There are many important examples of workers fighting back – and in some cases winning concessions – in China, Bangladesh, Spain, Greece as well as the Tekel workers in Turkey last winter. There are also struggles in Britain, at BA, on the underground, and more brewing (see article above) that will give us valuable experience. We need to make use of these experiences, publicise them when they are blacked out, discuss and draw the lessons and set them in the whole history of the working class and its struggles. The working class can only rely on itself in the fight back against the cuts and against capitalism. Alex 4.9.10