The worst line peddled by the likes of Geldof and Bono is that “those eight men have the power to do some real good for the world”. They say that the world leaders meeting at the G8 summit could do something to alleviate the terrible poverty stalking the planet. That they could halt the destruction of the global environment. That all we have to do is to join the parade and shout loudly, or dance to the music of Live8. That enough pressure, applied gently and democratically, will make the leaders stop in their tracks and pay attention to the needs of the oppressed.

Nothing but illusions – and illusions that prevent real thought and real action. 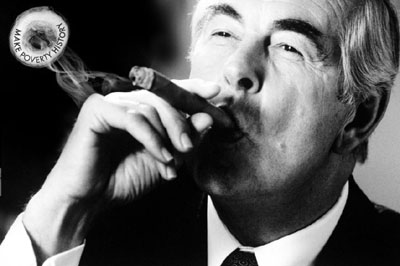 What are the world leaders? They are statesmen. Men of the state – the capitalist state. And the capitalist state is there to preserve the interests of capital. Capital is wealth extorted from the labour of the many by the few. Capital is wealth that grows fat on the toil and poverty of those who produce it – not to mention the millions whom capital cannot manage to exploit at all, but condemns to permanent unemployment and hunger. This has always been the case. It’s not a question of the good or bad intentions of the leaders. It’s a question of what they have to do to preserve their system of exploitation and profit. And this is more true than ever now that capitalism, as a social system, no longer helps the human race to develop its productive powers, now that it has become a barrier to the needs of humanity. Capital has become a force for destruction. Desperate to survive in the face of razor-sharp competition, it despoils every last corner of the earth. Desperate for markets and strategic influence, it engulfs the whole of society in endless war.

The world leaders are the captains of a ship that is heading inexorably towards icebergs. They cannot change direction because their interests as a class, the interests of the profit system, make it impossible for them to see any other way forward for social life. The needs of human survival cannot be entrusted to them. The hopes of humanity do not lie in begging them to change; the hopes of humanity reside in mutiny and revolt, in the overthrow of the leaders and the system they defend.

But what kind of revolt? There are many who understand that the problem is not what the G8 decides, but in the very existence of the G8. There are many who urge us not to put our faith in the world leaders, and who see the G8 summit mainly as an opportunity to protest against the present social order. The Dissent Network, for example, says that “we live in confusing times: millionaire pop stars shake hands with politicians and tell us that what the poor need is for more power to be given to the G8, that this will make poverty history. Yet, around the world, those excluded from power are increasingly reaching the conclusion that the lives of ordinary people, wherever they are, are unlikely to be improved by the policies of the G8. And, moreover, that the task of building alternatives to the current inhumane and ecocidal social order lies squarely with us” (featured in The Guardian, 29.6.05).

Quite so! But then the problem lies in what you put forward as your alternative. For the Dissent Network, the current Bolivian uprising provides the model, or the Zapatista rebellion in Mexico. Or self-managed factories like Zanon in Argentina. These are put forward as a new kind of movement, a new opposition to capitalism, “in which power is dispersed in diffuse networks, where difference is celebrated rather than sublimated, and where there are no official leaders of spokespeople”.

But opposing capital is not just a question of forms: you have to strike at its roots. And these are all examples of movements that have either been turned aside from a real opposition to capital, or began on the wrong ground from the start. In Bolivia, militant miners are no longer struggling for their interests as workers as they have done so often in the past – they are being drowned in a “popular” movement focused on the patriotic goal of controlling Bolivia’s energy reserves. In Mexico, rebellious peasants and landless labourers have been pulled behind the nationalist outlook of the Zapatistas. In Argentina, striking workers have fallen for the old fraud that managing their own exploitation is the way forward when enterprises fail.

However much it has changed its appearance since Karl Marx first used the phrase, capitalism everywhere produces its own gravediggers, the proletariat, the exploited class in this society. Capitalism can no more exist without a working class than it can exist without money or profit or unfair trade.

Marx also said that the existence of revolutionary ideas depends on the existence of a revolutionary class. The propaganda of the ruling class tells us day in and day out that there is no such thing in this society, and it’s certainly not the working class. But the fact that so many people are questioning the bases of capitalist society is itself a sign that, after more than a decade of disarray and confusion, the working class is beginning to move again. The struggles against pension ‘reform’ in France in 2003, the solidarity strikes of the German workers in 2004, these are some of the outward expressions of this deep stirring in the underground of present day society.

Those who really want to ask questions about the future this society is shaping, those who want to rediscover the real alternative, can only head in one direction. They can only join the struggle of the working class and help it to carry out its historic mission - the replacement of capitalism with a world communist society. WR 2/7/5