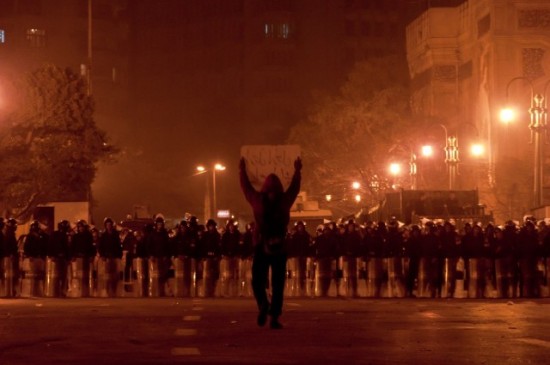 The thunder in Tunisia and Egypt is being echoed in Algeria, Libya, Morocco, Gaza, Jordan, Syria, Iraq, Bahrain and Yemen. Whatever flags the demonstrators carry, all these protests have their root in the world wide crisis of capitalism and its direct consequences: unemployment, rising prices, austerity, and the repression and corruption of the governments who preside over these brutal attacks on living standards. In short, they have the same origins as the revolt of Greek youth against police repression in 2008, the struggle against pension ‘reforms’ in France, the student rebellions in Italy and Britain, and workers’ strikes from Bangladesh to China and from Spain to the USA.

The determination, courage and sense of solidarity being displayed in the streets of Tunis, Cairo, Alexandria and many other cities are a true inspiration. The masses occupying Tahrir Square in Cairo or similar public places have fed themselves, fought off attacks by pro-regime thugs and the police, called the soldiers to fraternise with them, nursed their wounded, openly rejected sectarian divisions between Muslim and Christian, between the religious and the secular. In the neighbourhoods they have formed committees to protect their homes from looters manipulated by the police. Tens of thousands have effectively been on strike for days and even weeks in order to swell the ranks of the demonstrations.

Faced with this spectre of massive revolt, with the nightmare prospect of its extension across the ‘Arab world’ and even beyond, the ruling class all over the world has been responding with its two trustiest weapons: repression and mystification. In Tunisia, scores were gunned down in the streets, but now the ruling class proclaims the beginning of a transition to democracy; in Egypt, the Mubarak regime alternates between beating, shooting, gassing and running down protestors and issuing similar vague promises. In Gaza, Hamas arrests demonstrators trying to show solidarity with the revolts in Tunisia and Egypt; on the West Bank the PLO has banned “unlicensed gatherings” called to support the uprisings; and in Iraq protests against unemployment and shortages are fired on by the regime installed by the US and British ‘liberators’. In Algeria, after stifling the first signs of revolt, concessions are made legalising timid forms of protest; in Jordan the King sacks his government.

Internationally, the capitalist class also alternates its language: some – especially those on the right, and of course the rulers of Israel – openly support Mubarak’s regime as the only bulwark against an Islamist takeover. But the key note is given by Obama: after some initial hesitations, the message is that Mubarak must go and go quickly. The ‘transition to democracy’ is put forward as the only way forward for the downtrodden masses of North Africa and the Middle East.

The dangers facing the movement

The mass movement centred in Egypt thus faces two dangers. One is that the spirit of revolt will be drowned in blood. It seems that the initial attempts by the Mubarak regime to save itself with the iron fist have been stymied: first the police had to withdraw from the streets in the face of the massive demonstrations, and the unleashing of the pro-Mubarak thugs last week has also failed to sap the demonstrators’ will to continue. In both rounds of confrontation, the army has presented itself as a ‘neutral’ force, even as being on the side of the anti-Mubarak gatherings and protecting them from assaults by the regime’s defenders. There is no doubt that many of the soldiers sympathise with the protests and would not be willing to fire on the masses in the streets; some have already deserted. Higher up in the army, there are certainly factions that want Mubarak to go now. But the army of the capitalist state is not a neutral force. Its ‘protection’ of Tahrir Square is a also a form of containment, a huge kettle; and when push comes to shove, the army will indeed be used against the exploited population, unless the latter succeeds in winning over the rank and file soldiers and effectively dissolving the army as an organised part of the state power.

But here we come to the second great danger facing the movement: the danger that resides in its widespread illusions in democracy. The belief that the state can, perhaps after a few reforms, be made to serve the people; the belief that ‘all Egyptians’, perhaps with the exception of a few corrupt individuals, have the same basic interests. The belief in the neutrality of the army. The belief that the terrible poverty facing the majority of the population can be overcome if there is a functioning parliament and an end to the arbitrary rule of a Ben Ali or a Mubarak.

These illusions, expressed everyday by the demonstrators’ own words and banners, disarm the real movement for emancipation, which can only advance as a movement of the working class fighting for its own interests, which are distinct from those of other social strata, and which are above all diametrically opposed to the interest of the bourgeoisie and all its parties and factions. The innumerable expressions of solidarity and self-organisation that we have seen so far already reflect the genuinely proletarian element in the current social revolts; and, as many of the protestors have already said, they presage a new and more human society. But this new and better society cannot be brought about through parliamentary elections, through putting el Baradei or the Muslim Brotherhood or any other bourgeois faction at the head of the state. These factions, who may be carried to power by the strength of the masses’ illusions, will not hesitate to use repression against these same masses later on.

There is much talk about ‘revolution’ in Tunisia and Egypt, both from the mainstream media and the extreme left. But the only revolution that makes sense today is the proletarian revolution, because we are living in an era in which capitalism, democratic or dictatorial, quite plainly can offer nothing to humanity. Such a revolution can only succeed on an international scale, breaking through all national borders and overthrowing all nation states. Today’s class struggles and mass revolts are certainly stepping stones on the way to such a revolution, but they face all kinds of obstacles on the road; and to reach the goal of revolution, profound changes in the political organisation and consciousness of millions of people have yet to take place.

In a way, the situation in Egypt today is a summation of the historic situation facing humanity as a whole. Capitalism is in terminal decline. The ruling class can offer no perspective for the future of the planet; but the exploited class is not yet aware of its own power, its own perspectives, its own programme for the transformation of society. The ultimate danger is that this temporary stalemate will end in “the mutual ruin of the contending classes”, as the Communist Manifesto put it – in a plunge into chaos and destruction. But the working class, the proletariat, will only discover its real power through engaging in real struggles, and this is why what is now taking place in North Africa and the Middle East is, for all the weaknesses and illusions that hamper it, a real beacon for workers everywhere.

And above all it is a call to the proletarians of the more developed countries, who are also beginning to return to the road of resistance, to take the next step, to express their practical solidarity with the masses of the ‘third world’ by escalating their own combat against austerity and impoverishment, and in doing so exposing all the lies about capitalist freedom and democracy, of which they have a long and bitter experience.

Revolt in the Middle East