This is an extract from a text prepared for a recent internal meeting of the ICC’s section in Britain.

A range of official data allows us to see that the working class’ working and living conditions are under sustained attack. 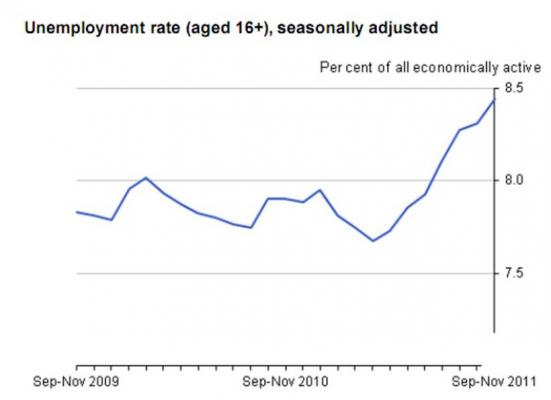 • The rate of redundancies has picked up over the last few months after falling back between November 2009 and November 2010. In the three months to November 2011 164,000 had become redundant (either voluntarily or enforced), an increase of 14,000 over the preceding quarter and of 5,000 compared to a year ago. The overall rate was 6.6 workers per thousand.[3]

• Growth in pay has slowed over the last few months falling to 1.9% in the three months to November 2011 from 2.8% in the previous quarter. The ONS offers an explanation: “This marked drop in earnings growth may reflect a number of pressures in the labour market: the desire by firms to reduce their costs in the face of weak demand; weak wage bargaining power of employees as a result of high unemployment and low employment levels; falling inflation that ease the decline in real wage growth and so reduce the pressure on employers to maintain wage growth; and falling demand and output.”[4] The same report goes on to note that the rate of increase in the public sector in the three months to November was 1.4% compared to 2.0% in the private sector, “This demonstrates the impact of the sustained public sector pay freeze. Both public sector and private sector wage growth are well below CPI inflation and so the sustained decline of real wages has continued.”[5] However, it is worth noting that overall cuts in pay were made much more rapidly in the private sector than the public sector – research by the IFS concluded that “it will take the whole of the two-year public pay freeze and two years of 1% pay increases to return public pay to where it was relative to private sector pay in 2008. This is because private sector pay reacted quickly to the recession. Pay in the public sector did not.”[6] This merely reflects the fact that the economic laws of capitalism take effect more rapidly in the private than the state sector.

• Labour productivity increased by 1.2% over the quarter to November 2011 while unit labour costs rose by 0.5%. However, this should be put in the context of falls in productivity compared to most major competitors during 2010.[8]

• The total amount of personal debt declined between December 2010 and 2011, falling from £1.454 trillion to £1.451 trillion. The majority of this borrowing is for mortgages, which increased from £1.238 trillion to £1.245 trillion. In contrast consumer credit fell from £216bn to £207bn. This suggests that workers are reducing spending or have less access to credit. Nonetheless, the average amount by owed adults in the UK stood at £29,547 in December 2011. This is about 122% of average earnings. The total owed is still more than the annual production of the country.[9]

• The impact of debt continues with 101 properties being repossessed every day in the last three months of 2011 and 331 people becoming insolvent. However, both figures have fallen since the previous quarter but in contrast it seems there has been a significant growth in the numbers using informal insolvency solutions while nearly a million “are struggling but have not sought help.”[10]

• Older people have seen the value of their pensions eroded by effective rates of inflation that are above the official figures with a third reporting they can only afford the basics, a quarter saying they buy less food, 14% reporting going to bed early to keep warm and 13% saying they only live in one room to cut down on costs.[11]

These figures show the efforts that workers are going to in order to get by: cutting down on spending in order the keep their homes; accepting reductions in pay in order to keep jobs, albeit with limited success. The lower than anticipated rate of repossessions and insolvencies and the apparent willingness of financial bodies to agree informal arrangements to manage debt suggest that the bourgeoisie is also trying to mitigate the impact of the crisis. This makes sense both economically (managing debt means it is more likely to be repaid) and politically. How long this can be maintained is uncertain given that the cuts are only in their first stage:

• “The planned cuts to spending on public services are large by historical standards… If the current plans are delivered, spending on public services will (in real terms) be cut for seven years in a row. The UK has never previously cut this measure of spending for more than two years in a row… if delivered, the government’s plans would be the tightest seven-year period for spending on public services since the Second World War: over the seven years from April 2010 to March 2017, there would be a cumulative real-terms cut of 16.2%, which is considerably greater than the previous largest cut (8.7%), which was achieved over the period from April 1975 to March 1982.”[13] The report by the IFS goes on to note that no country has ever cut spending at the level proposed for the number of years proposed.[14] It should be noted that all of these predictions are based on the assumption that the economy will pick up in the years ahead.

• People retiring in the year ahead expect to have an annual income of £15,500, which is 6% less than those who retired in 2011, and 16% less than those who retired in 2008. One fifth expect an annual income of £10,000 while 18% of those retiring expect to do so with debts averaging £38,200. The ending of final salary pension schemes in the private and public sectors (this is likely to be the reality of any deal stitched by the unions and bosses to resolve the current confrontation) will see far more workers living in poverty in their old age.[15]

[8]. ONS “International comparisons of productivity – First estimates for 2010”. Interestingly, this report states that between 1991 and 2004 the UK experienced the fastest growth rates of all G7 countries.

[14]. IFS Op Cit, p.72: “On the internationally comparable measure, UK public service spending is set to fall by 11.3% over the five years from 2012–13 to 2016–17. This is large compared with the size of cuts to public spending experienced by other industrialised countries over the last forty years… None of these countries has, for the periods for which we have data, cut this measure of public service spending for five consecutive years. In two instances, cuts have run for four years in a row: in the United States from 1970 to 1973 (cumulative cut of 4.0%) and more recently in Canada from 1994 to 1997 (cumulative cut of 3.9%).”

Life of the ICC:

Workers conditions in the UK