The global economy seems to be on the brink of the abyss. The threat of a major depression, worse than that of 1929, looms ever larger. Banks, businesses, municipalities, regions and even states are staring bankruptcy in the face. And one thing the media don’t talk about any more is what they call the “debt crisis”.

When capitalism comes up against the wall of debt

The chart below shows the change in global debt from 1960 to present day. (This refers to total world debt, namely the debts of households, businesses and the States of all countries). This debt is expressed as a percentage of world GDP. 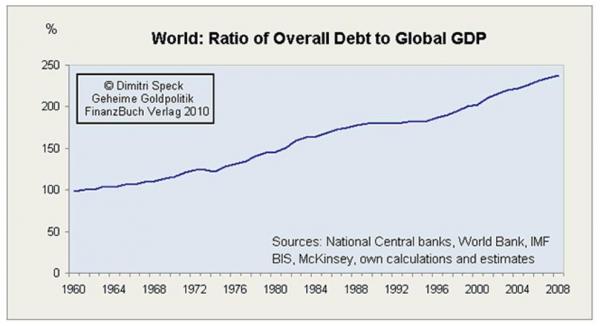 This change is dramatic in the so-called “developed countries” as shown in the following graph which represents the public debt of the United States. 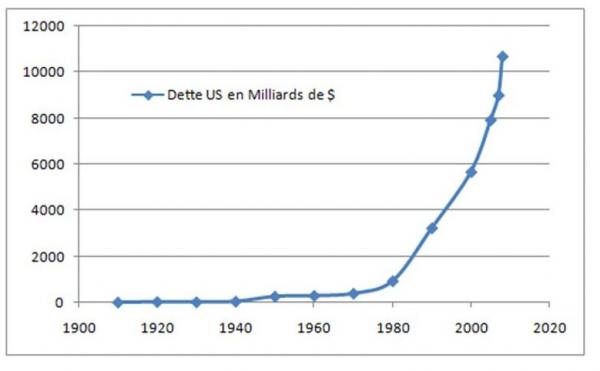 In recent years, the accumulation of public debt is such that the curve on the previous graph, showing its change, is now vertical! This is what economists call the “wall of debt.” And it is this wall that capitalism has just crashed into.

Debt, a product of capitalism’s decline

It was easy to see that the world economy was going to hit this wall eventually; it was inevitable. So why have all the governments of the world, whether left or right, extreme left or extreme right, supposedly “liberal” or “statist”, only extended credit facilities, run bigger deficits, actively favoured increasing the debts of states, firms and households for over half a century? The answer is simple: they had no choice. If they had not done so, the terrible recession we are entering now would have begun in the 1960s. In truth, capitalism has been living, or rather surviving, on credit for decades. To understand the origin of this phenomenon we must penetrate what Marx called “the great secret of modern society: the production of surplus value”. For this we must make a small theoretical detour.

Capitalism has always carried within it a kind of congenital disease: it produces a toxin in abundance that its organism cannot eliminate: overproduction. It produces more commodities than the market can absorb. Why? Let’s take a simple example: a worker working on an assembly line or behind a computer and is paid £800 at the end of the month. In fact, he did not produce the equivalent of the £800, which he receives, but the value of £1600. He carried out unpaid work or, in other words, produced surplus value. What does the capitalist do with the £800 he has stolen from the worker (assuming he has managed to sell all the commodities)? He has allocated a part to personal consumption, say £150. The remaining £650, he reinvests in the capital of the company, most often in buying more modern machines, etc.. But why does the capitalist behave in this way? Because he is economically forced to do so. Capitalism is a competitive system and he must sell his products more cheaply than his neighbour who makes the same type of products. As a result, the employer must not only reduce his production costs, that is to say wages, but also increase the worker’s unpaid labour to re-invest primarily in more efficient machinery to increase productivity. If he does not, he cannot modernise, and, sooner or later his competitor, who in turn will do it, and will sell more cheaply, will conquer the market. The capitalist system is affected by a contradictory phenomenon: it does not pay workers the equivalent of what they have actually produced as work, and by forcing employers to give up consuming a large share of the profit thus extorted, the system produces more value than it can deliver. Neither the workers, nor the capitalists and workers combined can therefore absorb all the commodities produced. Therefore capitalism must sell the surplus commodities outside the sphere of its production to markets not yet conquered by capitalist relations of production, the so-called extra-capitalist markets. If this doesn’t succeed, there is a crisis of overproduction.

This is a summary in a few lines of some of the conclusions arrived at in the work of Karl Marx in Capital and Rosa Luxemburg in The Accumulation of Capital. To be even more succinct, here is a short summary of the theory of overproduction:

* To accumulate and develop, capital must find buyers other than workers and capitalists. In other words, it is imperative to find markets outside its system, otherwise it is left with unsalable commodities on its hands that clog up the capitalist market; this is then the “crisis of overproduction”!

This “internal contradiction” (the natural tendency to overproduce and the necessity to constantly seek out external markets) is one of the roots of the incredible driving force of the system in the early stages of its existence. Since its birth in the 16th century, capitalism had to establish commercial links with all economic spheres that surrounded it: the old ruling classes, the farmers and artisans throughout the world. In the 18th and 19th centuries, the major capitalist powers were engaged in a race to conquer the world. They gradually divided the planet into colonies and created real empires. Occasionally, they found themselves coveting the same territory. The less powerful had to retreat and go and find another territory where they could force people to buy their commodities. Thus the outmoded economies were gradually transformed and integrated into capitalism. Not only the economies of the colonies become less and less capable of providing markets for commodities from Europe and the United States but they, in turn, generate the same overproduction.

This dynamic of capital in the 18th and 19th centuries, this alternation of crises of overproduction and long periods of prosperity and expansion and the inexorable progression of capitalism towards its decline, was described masterfully by Marx and Engels in The Communist Manifesto:
“In these crises, there breaks out an epidemic that, in all earlier epochs, would have seemed an absurdity, the epidemic of overproduction. Society suddenly finds itself put back into a state of momentary barbarism; it appears as if a famine, a universal war of devastation had cut off the supply of every means of subsistence; industry and commerce seem to be destroyed; and why? Because there is too much civilisation, too much means of subsistence, too much industry, too much commerce.”

At this time, because capitalism was still expanding and could still conquer new territories, each crisis led subsequently to a new period of prosperity. “The need of a constantly expanding market for its products chases the bourgeoisie over the whole surface of the globe. It must nestle everywhere, settle everywhere, establishes connections everywhere ... The cheap prices of its commodities are the heavy artillery with which it batters down all Chinese walls, with which it forces the barbarians’ intensively obstinate hatred of foreigners to capitulate. It compels all nations, on pain of extinction, to adopt the bourgeois mode of production; it compels them to introduce what is calls civilisation into their midst, i.e., to become bourgeois themselves. In one word, it creates a world after its own image ...”(ibid)

But already at that time, Marx and Engels saw in these periodic crises something more than an endless cycle that always gave way to prosperity. They saw the expression of profound contradictions that were undermining capitalism. By “the conquest of new markets”, the bourgeoisie is “paving the way for more extensive and more destructive crises, and by diminishing the means by which crises are prevented.”(ibid) Or: “as the mass of products and consequently the need for extended markets, grows, the world market becomes more and more contracted; fewer and fewer new markets remain available for exploitation, since every preceding crisis has subjected to world trade a market hitherto unconquered or only superficially exploited” (Wage Labour and Capital)

But our planet is a small round ball. By the early 20th century, all lands were conquered and the great historic nations of capitalism had divided up the globe. From now on, there is no question of making new discoveries but only seizing the areas dominated by competing nations by armed force. There is no longer a race in Africa, Asia or America, but only a ruthless war to defend their areas of influence and capturing, by military force, those of their imperialist rivals. It is a genuine issue of survival for capitalist nations. So it’s not by chance that Germany, having only very few colonies and being dependent on the goodwill of the British Empire to trade in its lands (a dependency unacceptable for a national bourgeoisie with global ambitions), started the First World War in 1914. Germany appeared to be the most aggressive because of the necessity, made explicit later on by Hitler in the march towards World War II, to “Export or die”. From this point, capitalism, after four centuries of expansion, became a decadent system. The horror of two world wars and the Great Depression of the 1930s would be dramatic and irrefutable proof of this. Yet even after exhausting the extra-capitalist markets that still existed in the 1950s, capitalism had still not fallen into a mortal crisis of overproduction. After more than one hundred years of a slow death, this system is still standing: staggering, ailing, but still standing. How does it survive? Why is this organism not yet totally paralysed by the toxin of overproduction? This is where the resort to debt comes into play. The world economy has managed to avoid a shattering collapse by using more and more massive amounts of debt. It has thus created an artificial market. The last forty years can be summed up as a series of recessions and recoveries financed by doses of credit. And it’s not only there to support the consumption of households through state spending ... No, nation states are also indebted to artificially maintain the competitiveness of their economies with other nations (by directly funding infra-structural investment, by lending to banks at rates as low as possible so they in turn can lend to businesses and households...). The gates of credit having been opened wide, money flowed freely and, little by little, all sectors of the economy ended up in a classic situation of over-indebtedness: every day more and more new debt had to be issued... to repay yesterday’s debts. This dynamic led inevitably to an impasse. Global capitalism is rooted in this impasse, face to face with the “wall of debt.”

By analogy, debt is to capitalism what morphine is to a fatal illness. By resorting to it, the crisis is temporarily overcome, the sufferer is calmed and soothed. But bit by bit, dependency on daily doses increases. The product, initially a saviour, starts to becomes harmful ... up until the overdose!
World debt is a symptom of the historical decline of capitalism. The world economy has survived on life supporting credit since the 1960s, but now the debts are all over the body, they saturate the least organ, the least cell of the system. More and more banks, businesses, municipalities, and states are and will become insolvent, unable to make repayments on their loans.
Summer of 2007 opened a new chapter in the history of the capitalist decadence that began in 1914 with the First World War. The ability of the bourgeoisie to slow the development of the crisis by resorting to more and more massive credit has ended. Now, the tremors are going to follow one after the other without any respite in between and no real recovery. The bourgeoisie will not find a real and lasting solution to this crisis, not because it will suddenly become incompetent but because it is a problem that has no solution. The crisis of capitalism cannot be solved by capitalism. For, as we have just tried to show, the problem is capitalism, the capitalist system as a whole. And today this system is bankrupt.