Following the publication of the two part article on women's role in the emergence of culture and human solidarity as a result of the evolution of the human species, the aptly named comrade "Baboon", who has made frequent contributions to (for example) the forum discussions on this site, has sent us this critical article. We are very glad to publish it on this site because it provides both an unusually well-documented investigation of the evolution of homo erectus in particular, and because we hope that its critical viewpoint will stimulate debate on the emergence of primitive communist, human, society.

At the end of Baboon's article, we also publish a reply from the author of the original articles on the subject.

The Selfish Gene: Dialectics of Conflict and Cooperation 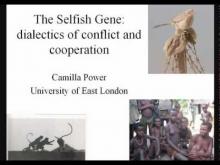 Many of those on "the left" have denounced "selfish gene theory" as if it demonstrated that human beings were necessarily selfish and therefore unable to create a supposedly selfless communist society.

As this talk delivered by Dr Camilla Power shows, selfish gene theory on the contrary provides the basis for understanding how the blind process of evolution by natural selection, led to the emergence of a species - man - whose survival depends on its capacity for solidarity.

Why write about primitive communism today? The sudden plunge into catastrophic economic crisis and the development of struggles around the world are raising new problems for the working class, dark clouds are gathering over capitalism’s future, and all the while the hope of a better world seems unable to break through. Is this really the time to study our species’ social history in the period from its emergence some 200,000 years ago to the beginning of the Neolithic (about 10,000 years ago)?

We are publishing here a contribution sent to us by the anthropologist Chris Knight on the relationship between marxism and science.

Here is a report of a meeting held recently in London entitled ‘The (im)possibility of revolution?' It was addressed by three speakers: the anthropologist Chris Knight; William Dixon, a professor of economics and former member of the old Radical Chains group; and Hillel Ticktin, a Professor of Marxist Studies in Glasgow and editor of the leftist journal Critique.

In WR 309 we published a contribution from one of our close sympathisers (‘Baboon'):  ‘Baboon's revenge: marxism versus feminism on the origins of humanity', a report of a meeting presented by Chris Knight of the Radical Anthropology Group at the Anarchist Bookfair in London last October.Baboon's article is very critical of Knight's basic thesis, rejecting it as anarchist and feminist. Having recently read Chris Knight's major theoretical work Blood Relations: Menstruation and the origins of Culture (Yale University press, 1991), I feel that his work deserves rather more consideration, even if some of Baboon's key criticisms certainly express valid concerns.