It was thus a twofold movement that enabled East Asia to infiltrate to its own advantage the international cycle of accumulation from the 1990s. On the one hand, the economic crisis forced India and China to abandon their respective Stalinist and nationalist models of state capitalism. On the other hand, the development of globalisation offered East Asia the opportunity to re-enter the world market by offering a place for the investments and delocalisation of the developed countries that were looking for a low-cost workforce. This twofold movement explains the see-saw evolution, described above, between world growth, which tends to ebb constantly, and strong localised growth in the Asian sub-continent.

So it is the deepening of the capitalist crisis that is at the heart of this blockage in international accumulation that has enabled East Asia to find a place as workshop of the world. It accomplishes this by accepting the investments, delocalisation and sub-contracts coming from the developed countries, which are looking for pools of low-cost labour power. It then exports back to these countries consumption goods produced for low wages. At the same time, to the Asian nouveau riche it sells goods, to which a great deal of value has been added in Asia, as well as luxury goods from the developed countries.

So the failure of the neo-Keynesian measures employed during the 70s in the central countries marked a significant stage in the intensification of the international crisis. This failure was behind the abandoning of Keynesian state capitalism in favour of a less regulated variety, whose main axis was a massive and frontal attack against the working class in order to raise the profit rate which had been halved since the end of the 1960s (see graph 6). This immense social regression took the form of a systematic policy of international competition in terms of wage levels. By managing to infiltrate this new international division of labour and wages, India and China gained a great deal from it. In fact, whereas capital was withdrawn almost totally from the peripheral countries during the post-war boom, today about a third is invested there and it is mainly concentrated in a few Asian countries. This allows these two countries to set themselves up as a base for the production and the re-exportation of goods assembled in factories that are anyway fairly productive but whose social conditions are appropriate to the early years of capitalism. This is basically what is behind the success of these countries.

Since the 1990s, India and China have received a huge amount of capital and delocalised industry, which transformed them into international workshops and inundated the world market with their low cost goods. In the previous period the wage differential in their obsolete factories, together with protectionist policies, made it impossible for the produce of under-developed countries to compete on the markets of the central countries. Today, however, liberalisation makes it possible to produce at very low wage costs in productive delocalised factories and so to make inroads into a number of productive sectors of the western market.

Therefore, the spectacular growth in East Asia is not the indication of a capitalist renewal but is rather a temporary upturn within a slow international decline. The fact that this aberration has been able to dynamise a significant part of the world (India and China) and even contributes to world growth is no more than an apparent paradox when viewed in the context of the slow international development of the crisis and the historic period of capitalist decadence[1]. It is only by taking an overview and placing each specific event in its global context that we can make sense of it and understand the situation. Just because we find ourselves on a bend in the river, it does not mean that we can conclude that the sea flows towards the mountain[2].

The conclusion that emerges from the evidence and that needs to be stressed, is that growth in East Asia is in no way an expression of a renewal of capitalism, it in no way erases the deepening of the crisis internationally and in the central countries in particular. On the contrary, it is part of its mechanism, one of its stages. The apparent paradox is to be explained by the fact that East Asia was there at the right moment to benefit from a phase in the deepening of the international crisis, which enabled it to become the workshop of the world offering low wage costs.

This recent blockage in international accumulation accentuates the economic dynamic towards international depression because its buoyancy greatly increases overproduction while depressing final demand in the wake of a relative reduction in the wage mass world-wide and the destruction of numerous uncompetitive regions or sectors throughout the world.

Marx has taught us that there are fundamentally two ways to improve the growth rate; either from above by increasing productivity through investing in new machinery and production processes, or else from below by reducing wages. As the re-emergence of the crisis at the end of the 1960s was expressed in an almost uninterrupted decline in productivity increases, the only remedy for the profit rate was a massive attack on wages[3]. The graph below shows this trajectory towards depression very clearly. During the post-war boom the rate of profit and accumulation developed in parallel and were at a high level. From the end of the 60s the rate of profit and accumulation halved. Following the switch to unregulated state capitalist policies from the 80s, the profit rate rose dramatically and even overtook the level attained during the post-war boom. However, although the rate of profit rose, the rate of accumulation did not follow it and remained at a very low level. This is a direct result of the weakness in final demand due to the huge reduction of the wage mass, which is behind the rise in the profit rate. Today capitalism is engaged in a slow recessive spiral: its businesses are profitable but they work on a foundation that is increasingly narrow because overproduction imposes limits on the base of accumulation. 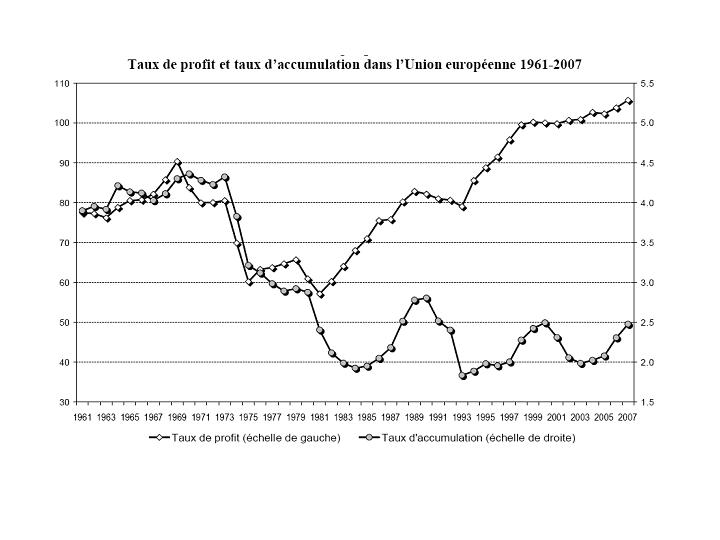 This is why the present growth in East Asia can by no means be seen as an Asian version of the post-war boom or as a renewal of capitalism globally but shows rather that it is sinking deeper into crisis.

The origin, the core and the dynamic of the crisis lies in the central countries. The slow down in growth, unemployment, the decline in working conditions are phenomena that greatly pre-date the development in East Asia. It was precisely the consequences of the crisis in the developed countries that restricted international accumulation and so enabled Asia to become the workshop of the world. This new constriction in its turn contributes to the economic trajectory towards depression in the central countries because it increases over-production world-wide (supply) and depresses the soluble markets (demand) by lowering the wage mass internationally (an essential economic factor) and by destroying a large number of the less competitive economies in the Third World (a factor that is marginal at an economic level but tragic at a human one).

The re-emergence of the historic crisis of capitalism from the end of the 1960s, its intensification throughout the 1970s, together with the failure of the neo-Keynesianism palliatives in operation at the time, cleared the way for unregulated state capitalism. This, in its turn, produced the deformed globalisation of the 1990s and certain countries have been able to play the role of workshops offering low wages. This is the basis of the spectacular growth in East Asia which, together with the crisis of the Stalinist and nationalist model of autarchic development, enabled it to infiltrate the new cycle of international accumulation at the right moment.

[1] In fact, world GDP per head has constantly declined decade after decade since the 80s: 3.7% (1960-69), 2.1% (1970-79), 1.3% (1980-89), 1.1% (1990-99) and 0.9% for 2000-2004. However, at the moment it seems likely that, for the first time, the average for the decade from 2000 may be significantly higher than that of the previous decade. Unless, that is, a serious recession occurs before the end of this decade, an eventuality which is likely enough. This improvement can, to a large extent, be attributed to the economic dynamism in East Asia. However, this leap is very relative because, if we look closely at the parameters, we can see that, since the "new economy" (2001-2002) crashed, world growth has been based mainly on large mortgage debts and an American balance of trade that has reached record lows. In fact the American property market (also that in several European countries) has greatly sustained growth through enormous debts based on re-negotiating mortgages (made possible because of the policy of low interest rates in order to restore growth). This has reached such a point that there is now talk of a possible property crash. On the other hand the public deficit, especially in terms of trade, has reached record levels and this has also greatly sustained world growth. So, when we look more closely, this probable improvement in the decade from 2000 will have been obtained by heavily mortgaging the future. (Note: this article was written before the sub-primes crisis broke out).

[2] This kind of upturn is hardly surprising and has even been a fairly frequent occurrence during the decadence of capitalism. Throughout this period the essence of the bourgeoisie's policies, those of state capitalism specifically, has been to intervene in the operation of its economic laws in order to try and save a system which tends inexorably towards bankruptcy.  This is what capitalism did on a large scale during the 30s. At the time, hard state capitalist policies as well as massive re-armament programmes created the temporary illusion that the crisis was under control and even that prosperity was making a come-back: the New Deal in the United States, the Popular Front in France, the De Man plan in Belgium, the Five Year Plans in the USSR, Fascism in Germany, etc.

[3] We refer the reader to the article in n°121 of this Review, which describes this process and gives all the empirical data.