Historically, India was considered the crown jewel of the British empire. When after World War II the British colonial rulers could no longer control India, they divided it. Almost at the same time as Korea and China, the old Raj was divided in two – into a Muslim dominated Pakistan and a multi-religious India with a Hindu majority.1 The two countries have been engaged in a permanent cold war, and four hot wars, ever since.

No sooner was independence declared in 1947 than a military conflict with the rival Pakistan erupted for control of the strategically vital and disputed territory of Kashmir. Pakistan occupied one third of Kashmir while India occupied three fifths (a part of Kashmir is still occupied by China). In the Indo-Pakistani War of 1965 India attacked Pakistan on all fronts after attempts by Pakistani troops to infiltrate into Indian-controlled Kashmir. The Indo-Pakistani War of 1971 was fought over the issue of self rule in East Pakistan; Pakistan was decisively defeated, resulting in the creation of Bangladesh.2

In 1999 Pakistan and India fought an 11-week-long border skirmish in the disputed northern Kashmir province. And during the past years repeated terrorist attacks – supported by Pakistan – have contributed to maintain the hostility between the two nuclear powers.

At the time of India's independence, the Indian ruling class was still able to keep clear of the emerging confrontation between the US-led Western and Russian led Eastern bloc. India took part in setting up the “non-aligned movement”, basically because the main line of confrontation between the two blocs was in Europe and in the Far East (e.g. the Korean war). Since membership of the non-aligned nations3 cut India off from US military support, it was forced to turn to Russia for military equipment and supplies, and even for some industrial investment, though the country was never part of the Russian bloc. However, India's attempt to keep out of the East-West confrontation could not prevent a clash with China, and in 1962 the two countries were engaged in the brief Sino-Indian War over the border in the Himalayas. The war convinced the Indian military to refocus on rearmament and an improvement in relations with the United States.

Thus India faces two arch enemies, Pakistan and China, with China heavily supporting Pakistan. Despite various diplomatic efforts the border disputes between India and China have not disappeared. India claims that China occupies more than 14,000 square miles of Indian territory in the Aksai Chin along its northern border in Kashmir (commonly referred to as the western sector), while China lays claim to more than 34,000 square miles of India’s north-eastern state of Arunachal Pradesh (commonly referred to as the eastern sector). India also is a long-term host to the Dalai Lama and about 100,000 Tibetan refugees who fled China's annexation of Tibet in 1950. In recent years China has also intensified its military build up along the Indian border, in particular in Tibet. For example the PLA Air Force has established at least four airbases in Tibet and three in southern China capable of mounting operations against India.4

With the exception of the British, India's rulers have historically had a land-based outlook. Since India's independence, all the major conflicts in which it has been involved, or which have broken out in the region (Afghanistan, Iraq, Iran) have taken place on land, without any major sea battles. The rapid development of Indian naval power is thus a recent phenomenon and can only be explained by the global confrontation unfolding in Asia. Having focused mostly on the threat from Pakistan and China on its north-eastern flank, India is now faced with an additional challenge – defending its position in the Indian Ocean.5

It is therefore no surprise that India has ordered 350 T-90S tanks (from Russia) as well as some 250-300 fighter planes, and that it has decided to produce some 1000 tanks in India itself.6

To counter China's "string of pearls" strategy the Indian Navy is growing longer sea legs by acquiring aircraft carriers, tankers and troop ships. Over the next decade, India plans to introduce 100 new warships to its naval forces. India now has the world’s fifth-largest navy. Whereas India continues to modernise its territorial forces and needs to keep thousands of troops mobilised at its border with Pakistan, the Chinese military has put even more emphasis on its blue water navies and increasing its out-of-area ballistic capabilities.

Being inferior to China on a military and economic level, Chinese expansion into the Indian Ocean has compelled India to look for an ally whose interests are also opposed to those of China; hence the convergence of interests between the USA and India. It is revealing that India, which in the 1950s could stay out of the major East-West conflict is now being pulled into a power struggle with China and forced to side with the USA. India already holds more joint military exercises annually with the US than any other nation. Despite strong hesitations amongst certain parts of the Indian ruling class, which are suspicious of the USA after so many years of close ties with the Soviet Union, India and the USA are condemned to “partnership”. The USA have no choice but to foster the modernisation and arming of India. In this context they have tacitly or directly supported steps towards developing the Indian nuclear industry – which can only be seen by both Pakistan and China as a direct threat. 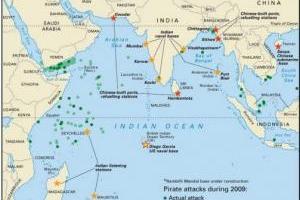 “Firstly, the geo-strategic rationale for an alliance between the US and India is the encirclement or containment of the People’s Republic of China, India can be the only counter-weight to China in the region. The other rationale or intentions of such cooperation are the neutralization of Russia as a player in Central Asia and the securing of energy resources for both the US and India. The US also has used India in its objective of trying to isolate Iran.”.7

India has established listening posts in northern Madagascar, the Seychelles, and Mauritius; in late 2009, it successfully co-opted the Maldives as part of its southern naval command. India has established its first military base on foreign soil at Ayni in Tajikistan. In this context the latest tests of long-range missiles are part of this global strategy of Indian imperialism.

India has started to develop closer economic and above all military ties with other countries that feel threatened by China, notably Japan and Vietnam. India has prioritised strengthening relations with Japan through increasing military contacts, maritime cooperation, and trade and investment ties. Tokyo in turn has pledged $4.5 billion in soft loans for the Delhi-Mumbai railway freight corridor. A joint security declaration with Japan was signed in 2008, calling their partnership “an essential pillar for the future architecture of the region.”9 Japan participated repeatedly in the Malabar naval exercises in the Indian Ocean. India feels particularly threatened not only by the Pakistan-China connection, but it is also alarmed by China's major financial and military support to the strategically important Sri Lanka. The attitude of the Myanmar regime, which for years had privileged links with China, is another factor of uncertainty. Thus India is faced on its western, northern, southern and eastern side and all along its shores by increased pressure from China. As we mentioned above, the Indian army is locked down in a permanent defence of its land borders. China makes periodic incursions into the Indian state of Arunachal Pradesh, which borders Tibet and is claimed by Beijing. China has countered US support for Indian nuclear power by the sale of two new nuclear reactors to Pakistan. Furthermore, the PLA has a presence in the Pakistan-administered Kashmir areas of Azad Kashmir and Gilgit-Baltistan. With China already controlling one fifth of Jammu and Kashmir, the Indian army is facing the reality of a Chinese presence on both the eastern and western flanks of the volatile Kashmir region.

As we shall see below, the contradicting interests in the Indian Ocean and the strategy of arming and looking for allies contains many unpredictable elements. For example early 2008 India launched an Israeli spy satellite (TechSAR/Polaris) into space. The Israeli satellite seems to be mainly aimed against Iran. Israel is supplying India with the latest electronic technology and there are indications which point to a closer cooperation between the USA-India-Israel.10 In this context of growing tensions in Asia India is an important player in a major naval build-up running from the coastline of East Africa and the Arabian Sea to Oceania. Apart from major presence the fleets of the US and its NATO allies in the Indian Ocean, the naval fleets of Iran, India, China, Japan, and Australia have been expanding, using the real problem of piracy in the region to justify their increased presence.11 An international overview shows that while the old industrial countries, suffocating under the crushing weight of the economic crisis, have been forced to reduce or freeze their armaments expenditure, all the emerging Asian countries are relentlessly increasing their arms spending. According to the latest figures released by the SIPRI, the world's five largest arms importers in 2007-2011 were all Asian states. India was the world's single largest recipient of arms, accounting for 10% of global arms imports, followed by South Korea (6%), Pakistan (5%), China (5%) and Singapore (4%). These five countries accounted for 30% of the volume of international arms imports, according to the SIPRI. This simultaneous build-up of advanced weaponry in the Asia-Pacific and South-East-Asia region is on a scale and at a speed not seen since the Cold War arms race between the USA and the Soviet Union.

While tensions rise in East-Asia and South-East Asia, the recent sharpening of tensions in the Middle East makes it very likely that any escalation of conflicts in the Middle East and its surrounding zone will have strong repercussions on the imperialist constellation in Asia.

1 The partition was one of history's biggest operations of ethnic cleansing, displacing up to 10 million people and leaving up to a million dead.

3 The Non-Aligned Movement was founded in 1961 in Belgrade by the leaders of Yugoslavia, Egypt, India, and Indonesia. It attempted to create a space between the two blocs by playing off one against the other. Its room for manoeuvre can be judged by the fact that Castro's Cuba – at the time totally dependent on Russia aid for its survival – was also a member.