Following the Russian refusal to accept Japanese demands for control over Korea, on February 8th 1904 Japan attacked the Russian fleet in Port Arthur and Tchemulpo.

The Russian-Japanese war heralded some of the characteristics of the wars in decadence.1

The first war in the 20th century between two major powers led to an unheard of mobilisation of the two countries – involving new levels of human, economic and military resources:

10 years before World War I the Japanese triumph over Russia, which had confirmed its leading position in the far East, caused a strong counter-reaction by its imperialist rivals. 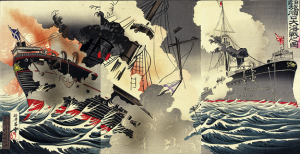 This first major war in the 20th century – unfolding in the far East between Russia and Japan – confirmed what Rosa Luxemburg predicted at the turn of the 19th century. In 1899 she wrote in the Leipziger Volkszeitung: “With the division and the integration of Asia, European capitalism no longer has any new areas for its conquest at its disposal, after this the world will be divided and every part of the world will be claimed by one ruler. Sooner or later the new orient question will enter the same phase in which the old one ‚fossilised‘: Step by step, the European opponents will start moving closer towards each other so that in the end they will finally stop after having reached the point where they face each other head on. And the economic and political forces which have been set free, the highly developed big industry, the gigantic militarism, will then start to be a terrible burden on the whole of society, because they will no longer find any outlet.”.2 Only 9 years later World War I confirmed this new level of imperialist relations.

The consequences of the Russian-Japanese war went far beyond the two warring countries.

The USA, which just half a century earlier (in the mid 1850s) had spearheaded the opening of Japan for capitalism, started to confront a Japan which was colliding with the USA over the dominant position in the Pacific and the far East.

While after the 1894-95 war between China and Japan, the “triple intervention” by France, Germany and Russia prevented 'excessive' conquests by Japan, this time round it was the USA and GB which opposed a too crushing victory and too big a strengthening of the Japanese position.

While the USA and Britain supported Japan at the beginning of the war, they withdrew financial support towards the end of the war to put pressure on Japan, since the USA considered Japan more and more as their main rival in the far East. And when the USA supported the Russian-Japanese “peace deal”, which admitted Japanese hegemony in Korea, Japan had to concede to the USA their right of intervention in the Philippines. At the same time the USA considered that Japanese control over Korea was a means of preventing further Russian expansion towards the East. Still, the USA which was “trailing” behind the European countries during their 19th century imperialist conquests, because it was still busy with fostering the expansion of capitalism in its own Western part, had arrived “late” in the division of shares in the far East. The first US “gain” were the Philippines, which they grabbed from Spain in 1898 in the first war during that period waged for the re-division of existing conquests (it was the first war that the USA waged outside of their own territories). During that period the USA annexed Hawaii and gained control over Wake, Guam in the Pacific.

While the European countries and Japan appeared as the "aggressors" towards China, the USA could pretend to act as China's "defender".

1 The war lasted 18 months. The main battle zones were Port Arthur, the railway line and the road leading to Mukden and Liaoyang. In the siege of Port Arthur more than 60,000 Japanese soldiers died. The biggest battle was that for Mukden, from 23rd February until the 16th March 1905 – more than 750,000 soldiers participated in the battle. More than 40,000 Japanese soldiers died. It was both a naval war and a war between territorial armies. Russia sent a large part of its fleet (40 ships) from the Baltic Sea in October 1904 along the African coast to the Chinese waters. But the Russian navy arrived only in May 1905 in far Eastern waters. In a big sea battle, the well prepared Japanese navy inflicted Russia a crushing defeat, in which most of the Russian ships were drowned by Japanese forces.

Russia had to concede southern Sakhalin, southern Manchuria and Korea to Japan, Japan received Port Arthur and Dairen. As a result, five years later, Japan could declare Korea its colony.