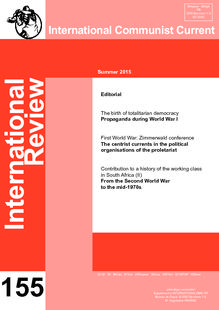 In this summer of 2015, the centenary of the Great War – as it is still called – is behind us. The wreaths on the monuments to the fallen faded long ago, the town halls’ temporary exhibitions have been folded and put away, the politicians have given their fine hypocritical speeches, and life can return to whatever passes for “normal”.

In 1915, the war is anything but finished. Nobody any longer has the slightest illusion that the troops will be “home by Christmas”. Ever since the German army’s advance was halted on the river Marne in September 1914, the conflict has been bogged down in trench warfare. During the second battle of Ypres, in April 1915, the Germans used poison gas for the first time, and this will soon be put to use by the armies on both sides of the front. Already, the dead are numbered in the hundreds of thousands.

The war will be long, the suffering terrible, and the cost ruinous. How can the populations be made to accept the horror to which they are subjected? This is to be the cynical task of the warring states’ propaganda bureaux, and it is the subject of our first article. Here, as in so many other domains, 1914 marks the opening of a watershed period which will see the step-by-step installation of an omnipresent state capitalism, the only response possible to capitalism’s decadence as a social form.

In 1915, we also begin to see the first signs of working class resistance, especially in Germany where the Socialist Party’s parliamentary fraction no longer votes unanimously for war credits as it had done the previous August. The revolutionaries Otto Rhle and Karl Liebknecht, who were the first to break ranks and oppose the war, have been joined by others. The movement of opposition to the war, bringing together a handful of militants from the various belligerent nations, will give rise in September 1915 to the first Zimmerwald Conference.

The groups who came together in the Swiss village of Zimmerwald were far from presenting a united front. Alongside Lenin’s revolutionary Bolsheviks, for whom the only answer to imperialist war was the civil war for the overthrow of capitalism, there was a – much more numerous – current which still hoped to reach an accommodation with the Socialist Parties that had gone over to the enemy. This was known as the “centrist” current, and it was to play an important part in the difficulties and ultimate defeat of the German revolution in 1919. This is the theme of an internal text written by Marc Chirik in December 1984, substantial extracts of which we are publishing here. The centrist USPD is no more, but it would be a mistake to think that centrism as a form of political behaviour has disappeared as a result; on the contrary, as this text shows, centrism is especially characteristic of decadent capitalism.

To conclude, we also publish in this issue a new article in our series on the class struggle in Africa, notably in this case, in South Africa. We deal here with the dark period between World War II and the world wide renewal of class struggle at the end of the 1960s; despite the divisions imposed by the sinister apartheid regime, we show that the class struggle did indeed survive and that it is far from being a mere accessory to the nationalist movement led by Nelson Mandela’s ANC.