The article that follows was originally published in 2006 in French, following the box-office success of the French film "Joyeux Noël". If we are publishing it now, it is because the 1914 Christmas Truce has become something of a media celebrity 100 years after the event with its own website, and even an advert for Sainsbury’s supermarkets taking the Truce as a theme. Needless to say, the ruling class presents it as a victory for "humanity" but one which had no future: "inevitably" the war went on, the idea that the simple soldiers could take matters into their own hands and bring the war to an end by overthrowing the entire capitalist system that engendered it. We are invited to remember the Christmas Truce, the better to make us forget the revolutionary potential of fraternisation. 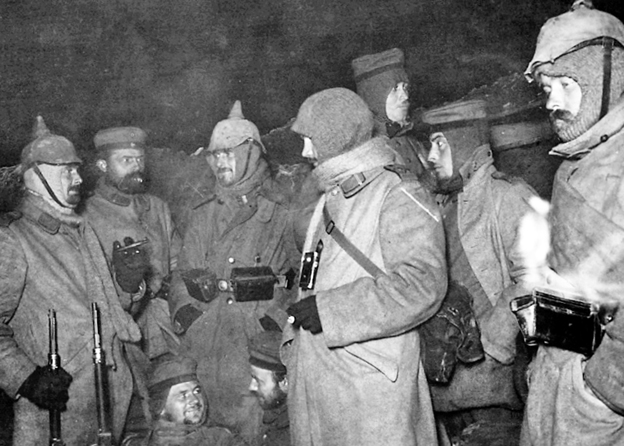 "The 1914-18 war as you have never seen it before at the cinema". So begins the enthusiastic review in the magazine Historia of Christian Carion’s film Joyeux Noël,1 which came to cinema screens on 9th November 2005 and has been selected to represent France at the 2006 Oscars.

What is so great about this film that it should deserve such an enthusiastic reception?

The film’s producer has chosen to focus on a "special moment" in the vast butchery of the Great War: 24th December 1914, the first Christmas Eve since the outbreak of war the previous August. That evening, as Carion says in the novel inspired by his film, "the unimaginable happened". Despite the orders for mutual slaughter, despite the hatred for the "Hun" or the "Französe" taught them ten years before on the benches of their primary schools with just this war in view, the soldiers on each side of the front put down their guns, sang Christmas carols, then spontaneously left their trenches to shake hands and share wine, schnapps, bread and cigarettes. According to the military archives, in some places football matches were even organised for the following day. These fraternisations are the film’s subject-matter.

Obviously, the ruling class does not make just any film a candidate for an Oscar, especially when it deals with such a sensitive subject as the Christmas Truce. If it does so, then this is clearly a sign that Carion’s film suits it perfectly.

The scenes where we witness the soldiers’ fraternisation cannot help but leave us overcome with emotion. Nonetheless, the meaning – or rather the absence of meaning – that is given to the event itself comes as a slap in the face to the viewer, and is nothing less than a falsification of history.

In the end, the 1914 Christmas Truce is reduced to a mere, though beautiful, parenthesis in the war, quickly closed for "business as usual" must go on. The dialogue between the French, British and German officers is instructive in this respect:

"‘The war’s outcome won’t be decided this evening... Nobody could reproach us for putting aside our guns on Christmas Eve!’.

‘Don’t worry! It’s just for one night’ went on Horstmayer [the German officer], trying to ‘reassure’ his French opposite number".

In the novel’s epilogue, we can read the following conclusion: "Needless to say, the war reasserted itself (…) When Christmas 1915 came around, the General Staffs on each side had learned their lesson and left nothing to chance: they ordered the shelling of areas which they considered too peaceful. There were to be no more fraternisations as in 1914". End of story. To repeat the words of the French officer Audebert "the parenthesis was closed".

Even in 1914 the press, especially in Britain, was aware of the Christmas Truce and did nothing to hide it. On the contrary, the filled their columns with similar sentiments to those we find today in Merry Christmas. Thus we could read on the Manchester Guardian of 7th January 1915: "‘But they went back to their trenches’, a shrewd and inhuman observer from another planet might say, ‘and brutally continued to kill and be killed. Obviously there is nothing to be expected from such noble sentiments’. To which we would rightly reply that much remains to be done: Belgium must still be delivered from the terrible yoke that weighs her down and Germany must be taught that culture cannot be imposed by the sword".2

"The is still much to be done, so no more of this nonsense and let us return to our trenches" is precisely what Carion makes his soldiers say, for example when one of his main characters, the German soldier Nikolaus, refuses to desert as his girlfriend encourages him to do because after all "I am a soldier here! I have duties, obligations just like the others!".

It is in this cheap moralising that the film slides over into pure fiction, a fantasy of the ruling class which rewrites history to suit itself and so confiscates it from the working class.

The fraternisations of Christmas 1914 were no "miracles without a future", no "intermission before the next act of the terrible drama" in the words of the historian Malcolm Brown, joint author with Marc Ferro of Meetings in No Man's Land, which appeared in bookshops shortly before the film came out.

On the contrary, both before December 1914 and throughout the war, fraternisations took place repeatedly on all the fronts: on the Western front between German, British and French troops, on the Eastern front between Russians and Germans or Austro-Hungarians, or on the Italian front between Austrians and Italians. Everywhere saw the same scenes: sharing food, drink, or cigarettes passed between the trenches, the same attempts to exchange a few words (some deeply regretted their inability to speak the language of those opposite them). Soldiers would often agree to avoid killing each other (the historians speak of agreements to "live and let live"). Attempts at fraternisation were sometimes pushed to the point that officers were sometimes forced to ask the enemy’s artillery to force their troops back to their trenches.

The idea that the fraternisations had "no future" implies another untruth: the idea that they were "rare and limited". "Without a future" also means "without any hope of putting an end to the carnage". With the support of a whole army of historians, the film sets out to empty the events of any political content. As Marc Ferro says "They were a cry of despair against useless offensives, from soldiers at the end of their tether... But they were not a step towards a questioning of the war" and above all "they had no revolutionary content".

If there were a Nobel Prize for hypocrisy, Marc Ferro would be a serious contender. It is surely obvious that when soldiers who have been ordered to massacre each other, put down their guns and shake hands instead, this calls the war into question de facto.

"The fraternisations had no political meaning". On the contrary, they expressed the international nature of the working class, the fact that workers have no interest in massacring each other for the interests of their exploiters and the nation. The fraternisations, and then the mutinies that came after December 1914 expressed a growing revolt within the working class, at the front and in the rear, against the suffering imposed by the war, which reached a crescendo in the Russian Revolution of 1917. There is no lack of examples of the implications of the Christmas Truce. The French corporal Louis Barthas writes in his war diaries3 that in the sector of Neuville-Saint-Vast the trenches flooded and French and German soldiers left them to fraternise. Later, after giving a short speech, a German soldier broke his rifle in a gesture of anger and "both sides applauded, and sang the Internationale". Another French soldier reports in January 1917 that "The boches [French slang for the Germans] made signs with their rifles that they would not fire on us and if they were forced to they would raise their rifle-butts in the air" (a well-known signal for mutiny). According to Barthas again, this time in the Vosges in 1917: "one [German] soldier took his rifle, waved its butt in the air, and finally aimed it not at us, but towards the German rear. It was very explicit and we concluded that he meant to say that they should shoot not at us but at those who led them".

The workers’ movement understands very well the value and the meaning of the fraternisations. In an article in Pravda (28th April 1917), Lenin expressed it very well: "The capitalists either sneer at the fraternisation of the soldiers at the front or savagely attack it (…) The class-conscious workers, followed by the mass of semi-proletarians and poor peasants guided by the true instinct of oppressed classes, regard fraternisation with pro found sympathy. Clearly, fraternisation is a path to peace. Clearly, this path does not run through the capitalist governments, through an alliance with them, but runs against them. Clearly, this path tends to develop, strengthen, and consolidate fraternal confidence between the workers of different countries. Clearly, this path is beginning to wreck the hateful discipline of the barrack prisons, the discipline of blind obedience of the soldier to “his” officers and generals, to his capitalists (for most of the officers and generals either belong to the capitalist class or protect its interests). Clearly, fraternisation is the revolutionary initiative of the masses, it is the awakening of the conscience, the mind, the courage of the oppressed classes; in other words, it is a rung in the ladder leading up to the socialist proletarian revolution.

This is the reality that the film Merry Christmas obscures. It highlights the fraternisations of 1914 only to hide their content and their future significance in the outbreak of proletarian revolution in Russia 1917. For all its humanist and pacifist sentiments, this kind of film renders the fraternisations meaningless, to confiscate the working class’ memory, and so its revolutionary perspective.

1Christian Carion’s own reflections on the making of the film can be found on the BBC web site.

2This quotation, taken from our article, has been translated back from the French. We hope to have rendered the spirit if not the exact words of the original.