According to the official story, the Queen is above politics. She truly stands for the unity of the people of Britain. So why don’t we all get together and celebrate the Jubilee?

But what could be more political than the idea of national unity? The idea that despite the growing gulf between those at the top of the pile of Britain, and those holding it up from below, we all have the same interests at heart (especially when those interests are pitted against other ‘national unities’).

Kings and queens, in fact, are nothing but symbols of political power – symbols of the state which only came into being because a few thousands of years ago society had split into different classes with conflicting interests. Just as the state didn’t always exist, neither did kings and queens. They were nothing but the personification of the impersonal state power.  Their rule was supported partly by armed force, partly by appropriating and thus distorting the old collective rituals and symbols which formerly expressed the unity of the first human communities. Throughout history, there have been those who have questioned the fraudulent legitimacy claimed by the monarchs – such as the Old Testament prophets who saw that when Israel fell under the sway of Kings, it meant abandoning the old tribal solidarity which had once protected the weak and the vulnerable.

The pomp and ceremony that is inseparable from the monarchy is thus an expression of our own alienation, of our loss of control of society and the way it functions.  We ‘invest’ in kings and queens and similar celebrities because of the enforced poverty of our own lives. 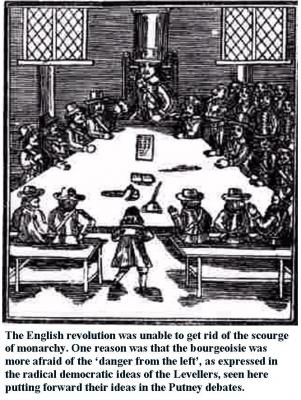 In mediaeval England, kings and queens were products of the feudal social order. The bourgeois revolution which broke out in the 17th century tried to get rid of them but it wasn’t able to go beyond its own internal divisions. The bourgeoisie, led by Cromwell and his ilk, was unwilling to push the revolution to its conclusion because he feared the rise of radical democracy advocated by the Leveller party and the embryonic proletarian menace taking shape in the True Levellers or Diggers. The British ruling class displayed its fabled ‘genius for compromise’ by becoming a historic compromise between the new capitalist class and the old aristocracy. Capitalist rule in Britain, after a very brief period in which it took the form of a Republic, thus found ways to make the best use of vestiges of feudalism like the monarchy and the House of Lords.

Some people think that it is high time that the bourgeois revolution in Britain was brought to a conclusion and that we should catch up with countries which have got rid of all inherited political institutions. Politicians who represent this way of thinking like to tie us up in knots about why we should dispense with the Lords and set up a fully functioning modern parliamentary system (with a president as the cherry on the cake).

But the time for completing the capitalist revolution is long gone. Capitalism is a system in profound historic decline and the only revolution on the agenda is the revolution that will overthrow capitalism and create a world human community.  No kings and queens, obviously. No lords and ladies. But also no bourgeois parliaments, no presidents, no national unities either! In short, no bourgeois republic. If we have outgrown the rule of monarchs it because we have outgrown the rule of the state, and need to finally restore society to itself.

The original idea of a ‘Jubilee’ (see Leviticus 25:9-17) was of a year of emancipation of slaves and restoration of lands, to be celebrated every 50th year. It was proclaimed by the sounding of a ram's horn on the Day of Atonement.  On the Jubilee "Ye shall not therefore oppress one another". But the Jubilee we can look forward to is one which lasts more than a year, and brings with it the definitive abolition of all forms of exploitation.