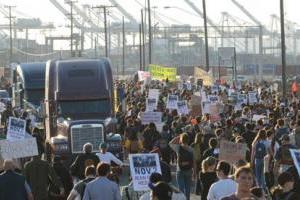 It is clear that while the longshoremen have been locked in a battle to protect their jobs and benefits, their struggle is identical with the struggle which the truckers and the workers of Operating Engineers Local 701 would wage in defense of their conditions of life against the attacks of capital. This message of unity is what could forge the solidarity workers need to confront capital. The struggle is a class struggle, not one against ‘union busting’, nor one about ‘organizing the un-organized’. As of January 27th, 2012 a settlement has been reached between EGT and ILWU Local 21, just in time for the first EGT ship to arrive. It arrived escorted by armed U.S. Coast Guard vessels and helicopters, the first known use of the military to intervene in a labor dispute on the side of management in 40 years. The ILWU trumpets the settlement as a victory for the workers because ‘union busting’ has not succeeded, and union jobs are back in Longview. It praises the Occupy movement (!!!) for helping achieve this ‘victory’. Those who called for organizing the unorganized may be baffled by the union’s ‘success’ in achieving this ‘victory’ without the involvement of the more numerous, and un-organized, truckers at the ports. Who won? In effect ‘confidential’, i.e., secret, behind closed doors, out of the control of the workers themselves, negotiations between the ILWU and EGT still continue, and it is likely the decisions will not be brought to light until the social situation is deemed calm, because we can rest assured, it will not be a ‘victorious’ contract. The victory, it seems to us, belongs squarely in the hands of the bosses and the bourgeois state, of which the unions are but an arm. The ILWU has won the confidence of the bosses because it has succeeded in freezing and derailing the incipient attempts at solidarity and unity across various sectors of the working class which Occupy correctly had aspired to. The truckers will continue to work under miserable conditions. The longshoremen are very likely to get a bad contract, while the ‘scabs’ who EGT had hired will continue their existence trying to make ends meet somehow, somewhere. Meanwhile, the ILWU across the west coast boast of having done the job that Governor Gregoire could not do when she intervened a year ago to try to settle the dispute. They say the workers have reasons to have confidence in the union! And the workers that produce the grain used by EGT and the soil they produce it from will continue to be exploited. Occupy, along with the rest of the working class, must learn that the only way to end this misery is through building real unity and solidarity across categories, race, gender, and nationality lines as they have started recognizing: by extending the struggle and keeping it firmly in their own hands and outside of unions’ and activists’ control.