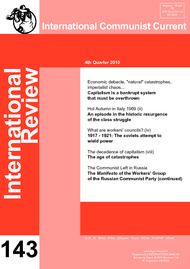 This issue begins with Capitalism is a bankrupt system that must be overthrown, which addresses the damage being done at the levels of the economy and the environment, as well as the carnage wreaked by war and the generalised chaos engendered by a system in its death throes. This question is taken up in more historical depth in The age of catastrophes, the eighth part of our series on the decadence of capitalism.

As the deepening of the economic crisis pushes the bourgeoisie to increase its austerity attacks on the working class, and the working class begins to enter the struggle - though with difficulties - it is vital to recall the history of its past struggles. In the second part of the Hot Autumn in Italy, we analyse how the bourgeoisie was able to recuperate the situation in 1968-69, in particular the weaknesses and confusions present within the minorities of the class at the time.

Even further back in the collective memory of the working class stands the shining torch of the Russian Revolution that remains a rich vein of lessons for the working class. The sixth part of the series What are workers' councils? looks back over the period 1917-21 and returns to the perennial question of why the Russian Revolution began to degenerate. The final article in this issue returns to the debates at the Third Congress of the Third international where the Russian left communist Workers' Group published its Manifesto, the second part of which took up the questions of the 'socialist' united front, the Theses of the Executive of the Communist International and the united front in countries where the proletariat has power.