When being opened up by capitalism, both Japan and China were ruled by declining dynasties. As in Japan, the local mode of production in China was also unable to compete with capitalism. Neither on a commercial, nor above all on a military level was the ruling Manchu dynasty able to resist foreign capitalist penetration. As in Japan, the triumphant march of capitalism did not come through the imposition of a trading capitalist class from within the country, but capitalism was mainly imposed from outside. 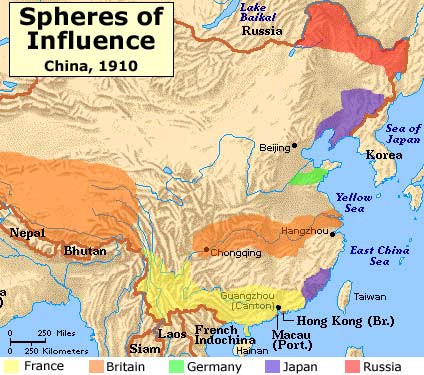 Within the framework of this article we have no space to go at greater length into the reasons for this profound stagnation of Chinese society. In the 1850s, Marx and Engels started to analyse the deeper roots of this phenomena. “China, one of those faltering Asian empires, which one after the other fell prey to the entrepreneurial spirit of the European race, was so weak, so much collapsed, that it did not even have the strength to go through the crisis of a people’s revolution, so that an acute indignation has turned into a chronic and probably incurable disease, an empire, so much decomposed, that it was almost unable to rule its own people or to offer resistance to the foreign aggressors".1

In his works, Marx, in order to understand the reasons why major non-European civilisations did not evolve towards capitalism, put forward the concept of an Asiatic mode of production.2

Two opium wars played a vital role in the opening of China for capitalism.

After opium was massively imported by the British East Indian company in the early 19th century, the Chinese ruling class for fear of losing competitiveness in relation to its rivals, tried to curb the consumption of opium in the late 1830s. No less than twenty million people were addicted to the vice at the time. Many state officials were addicted to opium. The high level of consumption in itself was already an expression of a decomposing society.

The most advanced European capitalist country, Britain, (later with French participation) used the resistance of the Chinese ruling class against the massive ‘invasion’ of opium as a pretext for sending its troops. Britain, the ‘most civilised’ nation of the west became the biggest opium dealer and used the prohibition of drugs through the Chinese authorities as a means for unleashing two wars.

In two opium wars (1839-42, 1856-60) Britain, (with France at its side in the second war) imposed a crushing military defeat accompanied by a series of massacres against the Chinese troops.

As a result of the overwhelming British military victory in the first opium war, Britain was granted concessions over Hong Kong and five trade zones along the coast. But the second opium war brought already a qualitative change. By then above all the European countries aimed at finding new markets for goods manufactured in Europe. Thus as a result of the second war the Europeans opened up China not only for opium, but above all for European trade products.

“Complete isolation was the prime condition of the preservation of Old China. That isolation having come to a violent end by the medium of England, dissolution must follow as surely as that of any mummy carefully preserved in a hermetically sealed coffin, whenever it is brought into contact with the open air.” (Marx “Revolution in China and Europe) 14.6.1853, New York Daily Tribune) And Marx pointed out: “We hear nothing of the illicit opium trade, which yearly feeds the British treasury at the expense of human life and morality.”3

And as elsewhere the imposition of capitalism was accompanied by violence. “Of the more than 40 Chinese treaty ports each one of them has been bought with rivers of blood, massacres and ruin” (Rosa Luxemburg, Accumulation of Capital, p. 342). The foreign capitalists (under the slogan of free trade and accompanied by opium and war) tore down the restrictions of Manchu ruled China to enable capitalist development. Unlike Japan, which was also opened up violently through foreign capitalist countries, but which was never occupied or pulled into a series of wars, China was to be split up into spheres of influence.

During the period of the 1860/70s, all the outlying parts of the Chinese empire were grabbed by foreign powers. And towards the end of the 19th century China had lost entire Indo-China to France, Burma to GB, Korea to Japan, all territories north of the Amur river to Russia, Turkistan and Mongolia had been practically annexed by Russia, Tibet by Britain, Manchuria was disputed by Russia and Japan, even China proper was as good as annexed.

At the end of the 19th century Britain laid a heavy hand on the entire Yangtze Valley, the centre of economic life of China, France appropriated Hunan, Germany seized Shantung and Tsingtao. The USA did not require any concession; they acted as a supporter of an "open door policy" towards China.

Inside China had grown a sort of small "imperium in imperio" in the shape of foreign settlements. Small areas of Chinese territory had assumed the character of so many outposts of imperialism.

Whereas India was under British rule alone (once the British had defeated the French in 1757) China quickly became some sort of colony of international imperialism, with different countries trying to grab pieces. But due to the presence of so many aspirants, the possibility of annexation of China by any one single power being out of the question, colonisation of China took the form of creating „spheres of influence“. The resistance to the out and out annexation of China could no longer come from China itself, formal annexation was prevented by the rivalry amongst the imperialist powers.

Still, until the early 1890s the division of Chinese territory into zones of influence could proceed without major clashes amongst the European rivals.

However, once the level of imperialist rivalries especially amongst the European countries reached new proportions and they shifted their focus from Africa to Europe and Asia, the level of rivalries in the far East took on a new qualitative form.

The consequences of the penetration of foreign capitalist countries meant that while the foreign capitalist nations had imposed capitalism, at the same time a powerful development of Chinese capital was obstructed because the foreign national capitals were mainly interested in plundering and selling their goods at the expense of Chinese competitors. They hampered the development of an autonomous Chinese industry, barring the road to a real industrialisation. Thus while no Chinese faction of the ruling class was able to spark off a capitalist development, at the end of the 19th century foreign companies controlled almost the entire Chinese economy.

2 The analysis of pre-capitalist societies was taken up in several texts by Marx and Engels. As their investigations evolved, their concept also gradually changed. For a more detailed analysis see - Perry Anderson in his “Lineages of the Absolutist State”, London 1974. See see International Review n°135 for a discussion of this question.