It's not for fun that the capitalists refuse to exploit a growing number of workers or to carryon exploiting the old ones. They get their profit from living labor as it is devoured by the machinery of the wages system. The work of others is, for capital, the goose that lays the golden eggs. As such, capital doesn't have an interest in killing it. But capital's only religion is profit. A capitalist who doesn't make a profit is doomed to disappear. Capital doesn't give out jobs out of humanism, but because that's the way it works. And if profits are insufficient, it lays off, it cuts jobs. Profit is the alpha and omega of the capitalist bible.

The graphs below show, for the USA and Canada, the simultaneous evolution of the profits made by companies and of the number of unemployed since 1965. They show how the fall in the mass of profits that began in 1973-74, then in 1979 and 1988, was accompanied by a rise in unemployment. When
profits fall, and because profits fall, capitalists cut jobs. Unemployment only diminishes when profits grow again. But, as we can see from these curves, the number of unemployed never goes back to its previous levels. Periods of higher employment are only a respite in a general tendency towards the increase in unemployment.
Capital can only ensure its profits by throwing an ever-increasing number of proletarians into unemployment. 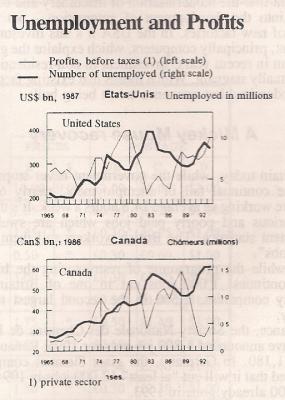