For a quarter of a century, since the end of the 1960s, the scourge of unemployment has continued to extend and intensify throughout the world. This development has been more or less regular, going through more or less violent accelerations and refluxes. But the general upward tendency has been confirmed in recession after recession.

The facts contained in these graphs are the official unemployment figures. They considerably underestimate reality since they don't take into account the unemployed doing 'training courses', nor young people taking part in poorly-paid work programs, nor 'prematurely retired' workers, nor the growing number of workers forced to work part time, nor those whom the experts call 'discouraged workers', ie those who no longer have the energy to go on looking for work.
Also, these curves don't take into account the qualitative aspects of unemployment. They don't show that, among the unemployed, the proportion of 'long term' unemployed has grown all the time, or that unemployment benefits have become more and more meager, shorter and harder to obtain.
Not only has the number of unemployed increased over the last 25 years, but also the condition of the unemployed has become more and more untenable.
Massive and chronic unemployment has become an integral part of life at the end of the 20th century, and this has helped destroy the little bit of sense that capitalism could once give to life. Young people are forbidden to enter into the adult world, and yet they get older much more quickly. Capitalism's lack of any historic future takes the form of anguish and despair amongst individuals.
The fact that unemployment has become massive and chronic is the most undeniable proof that capitalism is bankrupt as a method of organizing society. 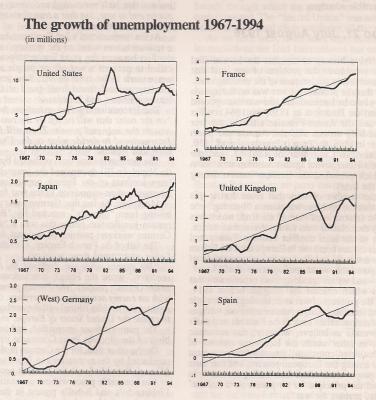