The American economy's plunge into recession continues, dragging the rest of the world down in its wake. The US leaders' official optimism of spring 1991 has died with the summer. Since September, the figures have made it impossible to maintain the illusion. There is no longer any room for confidence in a constantly rejuvenated capitalism, rising like a phoenix from its own ashes after each passing recession and continuing down in its pathless of endless growth[1]. Barely two years ago, the ruling classes triumphantly hailed liberal capitalism as humanity's only means of survival after its victory over the collapsing Stalinist "model" of state capitalism. Today, they are eating their words.

The dive into recession
For two years, the US economy has been marking time, unable to find a way out of the quagmire. The GNP's average annual "growth" rate during the Bush presidency has been 0.3%. 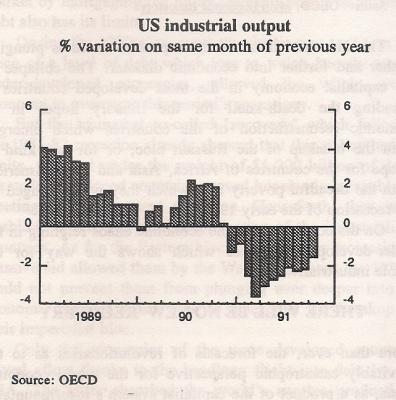 After three successive quarters of officially falling GNP, the 3rd quarter's improvement (2.4% growth) was hardly reassuring for the capitalists. Those responsible for the economy were expecting a much better result, between 3 and 3.5%. The simultaneous publication of September's monthly growth rate for industrial production (0.1%, in decline ever since June) only served to deepen the prevailing gloom in the bourgeoisie's leading circles. 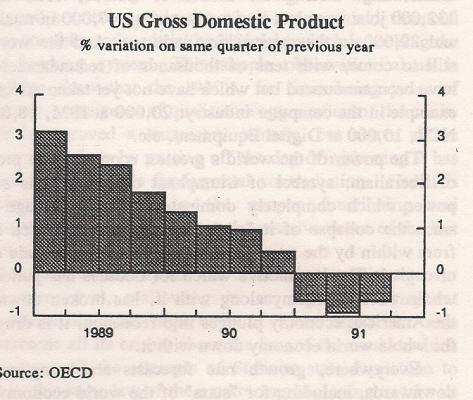 The American economy is faced with the prospect of a still deeper plunge into recession. And the whole world capitalist economy is being rocked to its foundations.
Quite apart from all the different figures which are published regularly throughout the world, more bad news comes with every passing day.
For business, the "optimistic" figure of 2.4% growth for the 3rd quarter 1991 is not even an improvement. On the contrary, competition is getting sharper, price wars are endemic, and profit margins shrinking. The result is not merely a fall in profits, but a plethora of enormous losses. Every branch of industry is affected. Some of the most spectacular examples - but far from the only ones - come from the heavyweights of American industry. 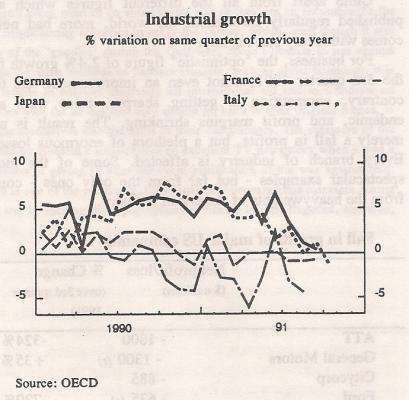 These disastrous financial results have led to a series "restructuring" or "recovery" plans, which boil down to factory closures, ie redundancies, and attacks on wages. The weakest companies go bankrupt, and their redundant employees swell the ever-greater ranks of the poor and unemployed.
Only a short time ago, Reagan claimed to have beaten unemployment for good. In reality, this was achieved above all thanks to a proliferation of badly paid and insecure service industry jobs, and to outrageous cheating with statistics. Notwithstanding, unemployment has grown relentlessly from 5.3% of the working population at the end of 1988, to 6.8% in October 1991. It should not be forgotten that an apparently insignificant 0.1 percentage point increase means about 130,000 extra unemployed. All this of course is according to government statistics, which are well-known to under-estimate the real situation. Moreover, the tendency is accelerating. During the month of October 1991 alone, 132,000 jobs were lost in manufacturing, 47,000 in retailing, and 29,000 in the construction industry. And the worse is still to come, with tens of thousands of redundancies that have been announced but which have not yet taken effect, for example in the computer industry: 20,000 at IBM, 18,000 at NCR, 10,000 at Digital Equipment, etc.
The power of the world's greatest economy, the prophet of liberalism, symbol of triumphant capitalism, the super-power which completely dominates the world stage ever since the collapse of it "soviet" rival, is being eaten away from within by the ravages of the worldwide economic crisis of capital. The locomotive which for decades has pulled the whole world economy along with it, has broken down. As the American economy plunges into recession, it is dragging the whole world economy down with it.
Everywhere, growth rate forecasts are being revised downwards, including for "stars" of the world economy like Germany and Japan. For those already in the recession, such as Canada and Great Britain, the illusions in a renewal of growth are melting with those of the USA.
On every level, the USA sets the tone for the world economy, and just as in the USA, so in Europe and Japan the recession is accompanied by a string of bankruptcy, factory closures, and of course mass lay-offs. 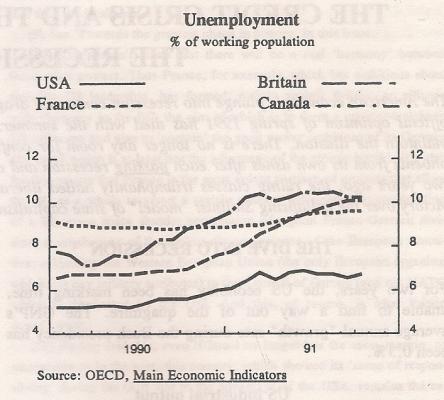 [1]    The ICC has constantly denounced this lie of the capitalist economy's prosperity. The open recession, in every characteristic, therefore comes not as a surprise but as the striking confirmation of the catastrophic and inevitable nature of the capitalist economy's crisis, which has been demonstrated by marxists for generations, and which the ICC has endeavored to demonstrate throughout its history. We need only mention the titles of the articles published during the last few years in the International Review, and which we recommended to interested readers:
“The perspective of recession has not disappeared”: no. 54, 2nd Quarter 1988
“Credit is not an eternal solution”: no. 56, 1st Quarter 1989
“The barbaric death-agony of capitalism”: no. 57, 2nd Quarter 1989
“After the East, the West”: no. 60, 1st Quarter 1990
“The crisis of state capitalism – the world economy sinks into chaos”: no. 61, 2nd Quarter 1990
“The world economy on the edge of the abyss”: no. 64, 1st Quarter 1991
“The recovery of the collapse of the world economy”: no. 66, 3rd Quarter 1991
[2]    Given that the American ruling class is in the midst of its electoral circus, it will probably use whatever means it can to keep the economy afloat in order to maintain the illusion of its health, even if these means falsifying the statistics still further. Even if this gives them a few months breathing space, this situation is clearly temporary.