The ravages of the international recession
After the recessions of 1967, 71, 75 and 82, in 1986 capitalism again started to slow down. But like a dying animal, it had one last moment of respite: the brutal fall in oil prices along with a massive resort to credit (Table 1) allowed it to hold back the downward plunge in growth. But today the cruel reality of the open recession, which has been put off briefly, has returned with a vengeance: we are seeing a rise in both inflation and unemployment and a fall in growth rates (Graph 1). 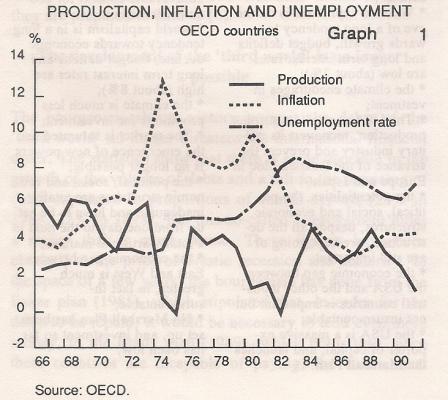 The USA, which spearheaded the artificial revival of the 80s, has been the first to enter into recession. The GNP has begun to go backwards: +1.4%, -1.6% and -2.8% respectively for the third and fourth quarters of 1990 and the first quarter of 1991. The other big industrialized countries have either joined the USA or have seen a considerable slow-down in growth rates. But the situation is far more catastrophic in other parts of the planet.
On the one hand, there has been a real fall in production in the Eastern countries (Table 2), where the opening of the Iron Curtain, far from constituting a new field of accumulation for capitalism, has further accelerated the crisis (see the article ‘The USSR in Pieces’ in this issue). Meanwhile the debts of the ‘third world’, despite numerous rescheduling and readjustments, continue to grow (Table 3). South America, a sub-continent that was promised a bright future, is sinking into a terrible recession: its GNP hardly grew by +0.9% in 1989 and went down to -0.8% in 1990. Expressed in term of income per head, its revenues fell to their 1978 level. And we won’t even mention Africa, which is really in the pits. With a population of 500 million, its gross product is equal to that of Belgium with 10 million inhabitants.
That the 1980s were years of hidden recession[1] are being confirmed by the onset of the open recession in the world economy. The 1980s, which in the bourgeoisie’s language seemed to be years of illusion, were in fact years of truth: the truth that there is no way out of the crisis, that the descent into recession is inevitable, and that all the palliatives are coming to an end of their usefulness. Today’s recession is a new convulsion in capitalism’s downward tendency since the end of the 60s (Graph 2).
Lies about an imminent recovery
If the bourgeoisie does sometimes recognize the reality of the recession, it immediately minimizes it and announces that there’ll be a recovery any minute. The development of credit, the fall in interest rates, German unification, the opening up of the Eastern countries, the reconstruction and economic development of the countries of the Middle East, the arms economy or the end of the war have been invoked one after the other to ease the disquiet in the working class. What is the real situation?
Can the war give a boost to the American economy like the Korean War did?
The Gulf war and the growth in military expenditure since the 1970s can only aggravate the crisis because the economic context is very different from the one after the Second World War:
As for the ending of the war, it can only aggravate the crisis whatever the bourgeoisie says. The weight of war costs on the budget deficit and the feeble economic benefits of the war are proof of this[2]. 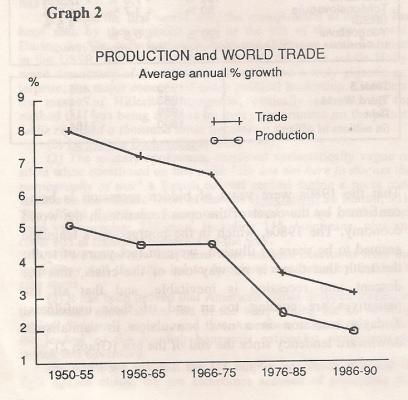