With Mikhail Gorbachev, Russian propaganda is enjoying the luxury of a media youth cure. Before the world’s cameras, Russia’s new head state declares: “revolutionary transformations are in progress in our country”, and the Kremlin’s new princes speak of “peace”, “revolution”, “democracy”, “disarmament”, etc. But none of this is really new; these have been Russian propaganda’s classic themes for decades. What is new, after the paralysis of the Brezhnev administration, is the new ruling group’s dynamism, its skill in promoting themes of propaganda and mystification, its ability to call on all the resources of the media arsenal, to liberate a few “dissidents” here, to make fabulous “disarmament” proposals there, to arrest a few “corrupt”' bureaucrats elsewhere. The Russian bourgeoisie is following the example of its Western colleagues; it is learning to master the art of ideological campaigns designed to hide from the proletariat the reality of the economy’s generalized decline, the drastic attacks on workers’ living conditions, and the sharpening of imperialist tensions.
Russia’s economic decline
Generally speaking, economic data is always subject to caution, because it is provided by the ruling class, and so in part determined by the latter’s propaganda needs; for most data in Russia, this tendency is much stronger than in the other great powers; the rest is simply classified as secrets. In these conditions, it is very difficult to have an exact idea of the real state of the Russian economy. However, a certain number of elements reveal clearly its weakness on the world scene, and its accelerating decline within the overall framework of capitalism’s world economic crisis:
-- the USSR’s status as the world’s second economic power is only relative. In 1984, the USA was in the lead with a GNP of $3627 billion, while the USSR took second place, closely followed by Japan: $1400 billion and $1307 billion respectively. However, a valid estimate of Russia’s GNP must take into account:
-- the fact that the rouble, which serves as the basis for calculations in Russia, is wildly overvalued in relation to the international currency of reference, the dollar;
-- a large part (10% to 20%) of Russian industrial output is unusable and unsaleable (even on the home market) but nonetheless entered in the accounts, while industrial products in general are of mediocre quality.
If we take account of these elements, it is likely that Japan’s real overall GNP has already overtaken Russia’s. However, even according to the official figures, Japan has already taken the lead in manufacturing output, which only accounts for 25% of Russian GNP.
Japan’s ability to catch up with Russia is proof enough of the latter’s worsening situation on the world economic scene, despite the years of officially announced record growth figures.
-- A good indication of a country’s degree of development is its GNP per inhabitant. In 1984, the USSR, with $5500 per inhabitant, came 49th on the world scale, after Hong-Kong and Singapore. Russia displays serious symptoms of under-development. This is especially clear if we simply consider the foreign trade situation, even if it only represents 6% of GNP (against 18% for France, for example). 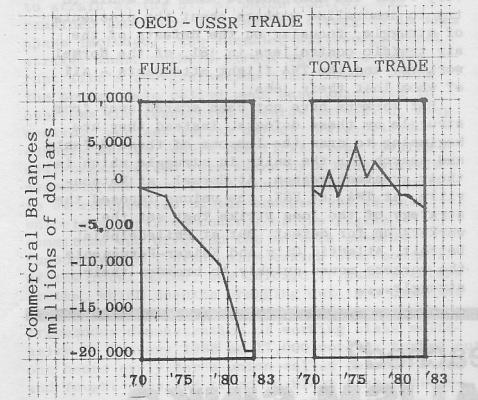