The crisis deepens, trade wars heat up, the attack on the working class intensifies

At the beginning of 1986, before an audience of skeptical workers, fed up both with 15 years of inexorably rising unemployment and with the end­less refrain that “we are nearly at the end of our economic difficulties”, the world’s govern­ments shouted from the rooftops that this time the end of the tunnel really was in sight - as long, of course, as the workers were prepared to accept a few more sacrifices. Why? Because the price of oil was collapsing on the world market and because the dollar’s exchange rate was dropping. The press spoke of the “oil counter-shock” and the “oil windfall” which were to solve all our problems. The nightmare was at last coming to an end.

Six months later, the hard fact is that despite the major capitalist economies’ $60 billion saving on their oil bill, not only has unemployment not fallen, it has on the contrary continued to grow and the announce­ments of more redundancies in every branch of industry are proliferating.
As for the austerity plans, the governments have simply reinforced them.
US economic growth continues to slow, reaching in the second quarter of 1986 its lowest level since the ‘black year’ of 1982 (+1.1%)
In Japan, whose production is more than ever dependent on its exports to the US, the growth rate has been negative for the first time since 1975 (-0.5% of GNP in the first quarter), bringing with it the specter of imminent recession. Like Japan, Europe is being subjected to the effects of the US economy’s exhaustion, and growth rate forecasts are constantly being re­vised downwards.
What has happened to the ‘oil windfall’
Since the end of 1985, the fall in oil prices and the dollar exchange rate has indeed been transformed into important savings, especially for the industrialized oil-importing national capitals (up to $60 billion, the equivalent of the total annual production of a country like Austria or Denmark). But what have the capital­ists done with this money? In the under­developed oil importing countries, it has done no more than soak up a fraction of their huge external debts. In the industrialized countries, it has for the moment done nothing but feed all kinds of speculation (in rare metals, currency exchange rates, etc..), and especially the frantic speculation that has swept over the major western stock exchanges during the last year.
Confronted with the virtual impossibility of finding real productive investments (opening new factories, employing new labor), capital takes refuge in speculative maneuvers. Capital flows, amongst others, into the stock exchanges, and company shares rise at lightening speeds, without the companies themselves preparing any significant new investment or production. Hence the absurd phenomenon, with its dangerous implications for the monetary system, that we have seen during the year May 1985 to May 1986, of the literal explosion of share prices: +25% in Britain, +30%, in the US and Japan, +38% in France, +45% in Germany, +206% in Italy (;) while at the same time, industrial production is stagnating or frankly in decline: -0.8o in Britain, +0.6% in the US, -1.7%, in Japan (unheard of since 1975), -1.8% in France, +1% in Germany, +I.2% in Italy.
Speculation of these proportions is always a major sign of crisis: it expresses the impotence of the productive apparatus, and decline of real capital in favor of what Marx called “fictitious capital”. It is creating a financial time bomb, since the profits thus gained are equally fictitious.
The savings made thanks to the fall in oil prices are not encouraging growth in the industrialized countries, because capitalism’s fundamental problem is not a lack of financial resources, but a lack of outlets, of solvent markets for its commodities. By contrast, this fall is having catastrophic effects on the oil producing countries by reducing proportionately their main source of income. In the forefront of the victims is the USSR, and thereby the whole eastern bloc.
The fall of oil and the dollar:
Signs of a new downturn in the economic crisis
Oil is not a raw material quite like the rest, due to its economic and military importance, and the fact that its world-wide processing and distribution depend essentially on the great American oil ‘multi-nationals’ ... and so on the Pentagon. But it is nonetheless a commodity subjected to the pressure of market laws. The collapse of its nominal price is not an isolated phenomenon. It is part and parcel of today’s overall fall in the price of raw materials (between 1983 and 1985, the prices of agricultural raw materials exported by the developing countries fell by 13%, that of minerals, ores, and metals by 8%: UNCTAD index). This is yet another typical symptom of capitalist economic crisis. The overproduct­ion of raw materials is not due to any particular increase in their production, quite the reverse, but to the fact that the manufact­uring industries that use them are themselves faced with a problem of over-production. The fall in their prices is the sign of insuffic­ient growth in the world market, of the generalized over-production of every kind of commodity.
As for the fall in the dollar, this is an immediate expression of the catastrophic situ­ation of the world’s greatest power. To escape from the collapse of the 1982 recession, American capital was forced to resort to a new headlong flight into debt, and in particular to a fant­astic increase in the budget deficit (see graph). Between 1982-85, the latter almost doubled, from $128 billion to $224 billion (and estimates place it no lower than $230 billion in 1986), which is about the equivalent of a year’s GNP for Belgium and Spain together, or of the sum total of the Mexican, Brazilian, and Venezuelan debt! As for its balance of pay­ments - the difference between its exports and imports - the deficit has grown from $34 billion in 1982 to $124 billion in 1985, in other words a 265% increase in three years. We have thus arrived at a point - highly significant of the state of health of world capital - where the world’s greatest economic power has become the world’s most indebted state. 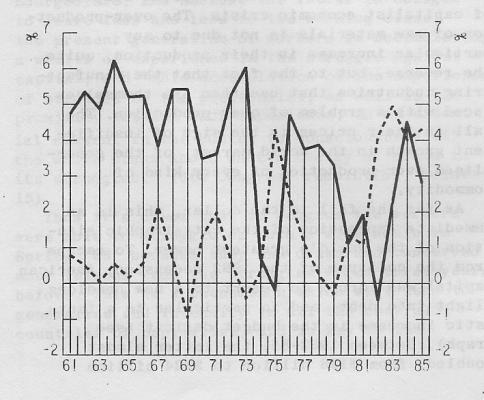 The collapse of the dollar’s exchange rate is a sign of this state of affairs. US capital is obliged to let the exchange rate fall, on the one hand because this is the easiest way of reducing its astronomical debt (owed in dollars), and on the other because it has no other way of improving the competivity of its goods on the world market.
20 years later, the markets problem by the end of the post-war reconstruction in broad daylight, increased ten-fold
But over and above its immediate meaning for the American economy, the fall in the dollar is a sign of the dead-end in which world capitalism has been caught since the end of the ‘60s.
During the ‘50s and ‘60s (the ‘golden years’ as the bourgeois economists say nostalgically today), the world economy experienced a devel­opment based essentially on the dynamic created by the reconstruction of countries laid waste by the second world war. The USA exported mass­ively to Europe and Japan, which absorbed just as massively these goods ‘made in the USA’, and the whole world worshipped king dollar as if he were gold. However, in the second half of the ‘60s, the reconstruction came to an end: Europe and Japan became powers which were not only capable of exporting, but which could not survive without exporting more and more. Already in 1967, a sharp slowdown in German growth triggered off a first world recession. In the next 15 years, it was to be followed by three other recessions, each one deeper and more widespread than the previous: 1970, 1975, and 1982.
Up to now, western capitalism has overcome these recessions, first of all by ‘cheating’ with its own laws, and abandoning some of the most restrictive aspects of its own mechan­isms, rather like a ship which, as it begins to sink, throws its equipment overboard in order to sink more slowly. But above all, it has resorted massively to credit in every form, ie to putting off the day of reckoning … without at all solving the fundamental problem: its intrinsic inability itself to create real solvent outlets capable of absorb­ing its production.
Thus, massive loans have been made to certain under-developed countries, to the eastern bloc, to the oil producing countries, and finally to the government of the world’s greatest power to finance its armament.
And so the 1970s witnessed the boom of the oil producing countries, and the ‘Brazil­ian miracle’ and the industrial modernization of certain eastern bloc countries (Poland) thanks to western loans.
But at the beginning of the 1980s, all these credits expired: it was no longer enough to build and run factories - their products had to be sold. Unable to find a place in a saturated world market dominated by the old powers, one after another, those countries that had acquired new industrial capacity declared themselves unable to repay their debts, and so a posteriori unable to continue buying: hence, for example, the bankruptcy of Polish capital in 1980. Those of other periph­eral countries followed one after the other. Non-oil producing under-developed countries’ imports, which in 1930 were still growing at 11% a year, fell by 5% a year in 1982. The growth of the non-industrialized oil-producing countries’ imports went from 21% in 1980 to 2% in 1982 and to -3% in 1983.
The 1982 recession, the deepest and most widespread since World War 2, was the shatter­ing demonstration of the failure of this head­long flight into credit.
At the cost of huge deficits, the ‘American recovery’ of 1983-84 prevented the world financial system, and therefore the economic system itself, from collapsing completely. However, despite the immense resources employed by US capital, the recovery has not really taken place: it has not succeeded in stimulating the economies of the peripheral countries which are still in a state of collapse, while Europe has done no more than stagnate. And as early as mid-1985, the ‘locomotive’ itself showed signs of running out of steam.
Today’s fall in the dollar, the rapid rise of American protectionism, the measures taken by the US government to reduce its budget deficit, are signs of the end of this fourth attempt at ‘recovery’ by a decadent world capitalism which, after almost 20 years, is plunging into ever-deeper convulsions, with ever-more tragic results for humanity, incapable of overcoming its own contradictions.
Perspectives
The shrinking of the world market due to the bankruptcy of the under-developed countries -oil producing or not - and of the eastern bloc economy, and to the impossibility of the great powers continuing their headlong flight into debt, the menace of bank failures and financial collapse; even the most optimistic bourgeois economists no longer dare speak seriously of a world recovery.
The worlds different capitals face a dive into recession and an unprecedented sharpening of a merciless trade war amongst the ‘survivors’ for the remaining market shares.
The more the market shrinks, the more bitter this trade war becomes, and will become. And the main weapon in the competition for markets is price reductions, and therefore the lowering of production costs, and in the first place the cost of labor.
Redundancies in branches considered ‘less competitive’, the ‘flexibility’ of labor, the generalization of temporary and insecure jobs, falling money and ‘social’ wages from social security to family allowances, by way of pensions, education, health, etc.
From Australia to Norway, from Japan to Belgium, and from Argentina to the United States, governments everywhere are applying so-called ‘austerity plans’ aimed at reducing labor costs, by brutally attacking the working class’ living conditions to allow capitalism to survive.
More than ever, the logic of capitalist exploitation is revealing its true nature: its absolute antagonism with the workers’ most basic interests.
********
The continued decomposition of this barbarous and decadent system will go in reducing the exploited classes to a state of intolerable misery. But by doing so, it is creating the conditions that will allow the world proletariat, through its struggle to survive, to achieve at last its international unity and to confront its historic task: the destruction of capitalism, and the construction of communism.
RV: September 7, I986.