The bourgeoisie doesn’t have a solution to the crisis of its system and its remedies are only provisional palliatives which push the effects of the crisis still more dramatic and serious levels. The end of the American ‘recovery’ implies a new downturn in the recession of the world economy. And Europe, less well placed than the United States and Japan, is going to find itself again in the front line.
This new aggravation of the crisis, linked with the development of the wave of class struggle be beginning in 1983 and showing the intact combat­ivity of the proletariat, is a determinant factor in the future evolution of the international sit­uation, tending to lead to a loss of illusions at the very heart of the industrial metropoles, notably in Europe, where the world proletariat is strongest and most concentrated.
With the perspective of a new accelerated down­turn in the recession, a violent turning point is taking shape in the world situation: even the most developed countries will no longer escape the most serious effects of the crisis, and the tragedy of the third world shows down what economic road they are travelling.
Since the beginning of the ‘80s, and under the impulsion of Reagan who sets the tone, the domin­ant class hasn’t stopped proclaiming in all the media that the world economic situation is getting healthier, that all goes well, and that the sacri­fices imposed are necessary to finally emerge from the crisis. The economy has become a media star. A plethora of different statistics announced pel­mel, regular ‘informational’ and ‘educational’ programs, contradictory declarations by ‘res­ponsible’ politicians and economists babbling non-stop, reports on the example of model firms and export leaders, etc - all this serves to mask the essential: the crisis is getting worse and the bourgeoisie is incapable of stopping it. Capitalism, as an economic system, is in the process of going bankrupt and is dragging human­ity along with it.
The present optimistic declarations of the capitalist leaders on the duration of the American recovery, on its beneficial effects on Europe, on the positive effects of the fall of the dollar and oil, are pure lies.
The myth of the recovery
With a fall in the growth of the US economy to 3% from 6.8% in the preceding year, 1985 marked the end of the ‘American recovery.’ But on the world scale, this ‘recovery’ has only compensated - essentially by the creation of a massive commer­cial deficit - for the decline of third world markets badly shaken by the fall of raw materials. The trajectory of world trade has remained hope­lessly stagnant since the beginning of the ‘80s. 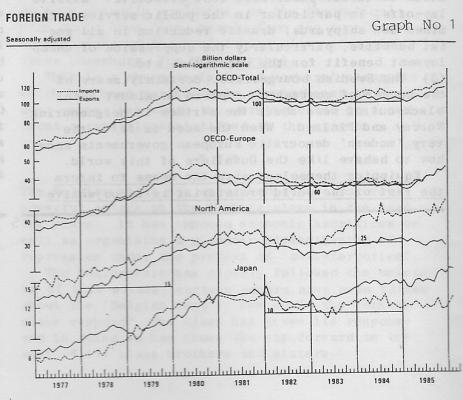 Europe and Japan under the blows of the crisis
Even the USA which is the most powerful economic world power no longer has the means, through budgetary and commercial deficits which it has accumulated, to support the activity of the world economy. Certainly the fall of the dollar by 35% in relation to the currencies of its principal European and Japanese competitors, is going to give a renewed competitivity to American products which were penalized by the high dollar rate which in turn had allowed the Europeans and Japanese to develop their exports. But this situation now heralds a closure of the American market to European and Japanese exports, a closure accent­uated by protectionist measures.
In the same way, if the fall by half in a few months of the price of oil (principal raw material in world commerce), linked to the fall of the dollar, has in the first instance allowed the importers of the industrial countries to make sub­stantial economies, it nonetheless means a reduct­ion of the markets represented by the producer countries, notably OPEC and COMECON for whom oil is the principal export and whose purchasing power has been cut by the fall in its value. This means, for example, that one-fifth of Japanese exports are going to be directly hit by the reduction of markets due to the fall of the dollar and oil. (see Table No 1) )
Table 1
That means that a 1/5th of European exports and nearly half of Japanese exports are going to be directly hit by the reduction of markets as a result of the fall of the dollar and the price of oil.
What’s beginning is a new step in the recess­ion; the inevitable fall in exports will mean a slowing down of production and thus factory closures, bankruptcies and redundancies.
Greater competition
In these conditions, competition is going to be fiercer to preserve ‘its’ part of the market, and the badly-placed countries are going to suffer the full lash of the crisis, particularly in Europe. Because it is the dominant power, the United States is clearly the most able to defend the interests of its national capital against rivals. In imposing the fall of the dollar, in returning to protectionist measures to defend its home market, and in returning to the whole panopoly of means to push exports (subventions, economic and military pressure, etc) the US shows its ambition: to stabilize its commercial balance and this can only be done at the expense of European and Japanese rivals.
The commercial war, from now on, will be waged to the full, and in this difficult exercise, it’s Japan which has particularly distinguished itself, whereas Europe has been left behind. In the cont­ext of redoubled competition, Europe is the most vulnerable and fragile. Europe has profited least from the effects of the ‘recovery’ of 1983 and its indices of production have remained semi-stagnant since the end of 1979. 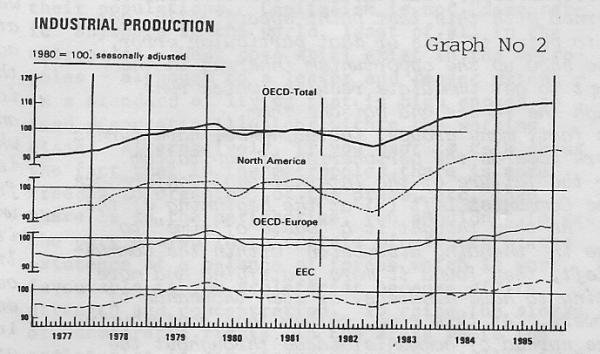 An accelerated attack on the working class
The bourgeoisie, at least its leading cliques, is certainly not fooled by its optimistic flannel. Each national fraction of the dominant class is putting in place, in an accelerated manner, new programs of austerity in order to lower the costs of the work-force, to stay competitive in the face of the contraction of export markets.
It’s always in the name of the defense of the national economies’ competitiveness that sacrifices are demanded from the working class. As the same thing happens in all countries, the same sacrifices are exacted, and everywhere the buying power is reduced, so the lowering of the standard of living of the working class, far from being a solution to the crisis, signifies in fact a new reduction of the market. It’s the very contradict­ion that the capitalist economy cannot overcome. It’s overproduction which leads to recession.
Unemployment, which has already attained dramatic proportions, can only grow even more, as it has done since the beginning of the ‘80s in Europe. The 10.8% unemployed of the active pop­ulation in the EEC in 1985 is going to be greatly increased in the period to come. 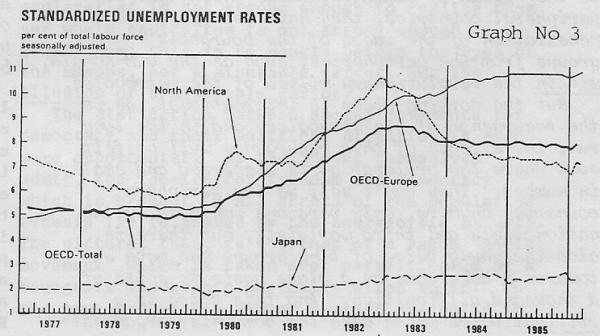 The increase in unemployment, wage-freezes, social service cuts in Europe in recent months show that the attacks against the working class are increasing, always justified in the name of the health of the world economy. The results will be no different from preceding austerity progr­ams; they will be worse for the working class and without effect on the crisis which continues to deepen.
Until now, the dominant class has used to the best advantage it could, the economic stagnation to try and attack the proletariat sector by sector, thus permitting the dispersion of struggles and preventing their unification. A new fall in world trade and thus production is going to dramatically reduce the bourgeoisie’s margin of maneuver and it will be obliged to attack the working class head-on. The very evolution of the economic crisis determines the forms taken by the bourgeoisie’s attack, and thus the dynamic of the class struggle.
This evidence of the fact that capitalism has nothing to offer anymore is going to disperse the smokescreen of capitalist propaganda. In the period to come, everywhere in the world, the prol­etariat will be attacked heavily, and pushed to express its reserves of combativity. But it is in Europe, the first and oldest proletarian concen­tration on the planet, that the situation is particularly significant. It’s for the oldest and most experienced proletariat of the world to draw the lessons of the economic bankruptcy of capital, to resist the increased attack of the dominant class, to translate the loss of confidence in the capitalist economy into a consciousness of the necessity to destroy this economic and political system. The future depends on the capacity of the proletariat to do this. The end of the ‘80s, marked by the dramatic acceleration of the crisis, will be decisive.
28.5.86