In the epoch of computers, of communication by satellite, information circulates at the speed of light around the globe, and exchange likewise. A few telephone calls, and billions of dollars have changed hands. Fortunes are made or lost in the space of a few minutes. The dollar continues its frenzied spree across the planet in an incessant movement: from New York to Chicago, from Chicago to Tokyo, from Tokyo to Hong-Kong, to Zurich, Paris, London...each financial centre serves as a sounding board for the others in maintaining the incessant movement of capital.

The rise of speculation

The dollar is the world currency par excellence; over 80% of world trade is conducted with dollars. Fluctuations of the dollar’s course affect the entire world economy. And the dollar’s course is anything but stable: over January and February1985 the dollar has continued its blazing, soaring ascent, at first by centimes a week in relation to the French franc, and accelerating its movement by 10 centimes a day subsequently. On February 27, after the alarmist declarations of Volcker, president of the American Federal Bank, and the intervention of the big central banks, there was a slithering drop. In the space of a few minutes the dollar shifted, in relation to the French franc, from 10.61 to 10.10 only to rise to 10.20FF : 40 centimes of a loss vis-a-vis the franc, a 5% devaluation vis-a-vis the German mark. In this way more than 10 billion dollars went up in smoke on the world market. Already, in September ‘84, the dollar went down by 40 centimes in one day, but that didn’t stop it resuming its ascent subsequently under the pressure of international speculation.

Why the dollar is soaring?

The economists are at a loss. And so, Otto Pohl, governor of the West German Federal Bank, at a symposium of the top nobs of international fin­ance, remarked ironically: “The dollar is mirac­ulous, and on this point our vision is confused, but after discussion we will be confused at a higher level.” Not very reassuring for the world economy.

In this case, why such a frenzied speculation on the dollar on all the financial markets of the world? There are two essential reasons for this: 1) The American policy of budgetary and commerc­ial deficit creates an enormous need in the Amer­ican economy for dollars to cover this. The bud­getary deficit reached $195bn in 1983 and $184bn in 1984 (see table 3) and the commercial deficit amounted to $123.3bn in 1984. And this deficit is not shrinking, as table 1 shows.

And the timid propositions to reduce the budgetary deficit announced by Washington since December1984 aren’t going to put a brake on this tendency. On the contrary, they will merely pressure speculators and push the dollar up even further. Which is effectively what is happening. 2) The USA is the leading world economic power, the fortress of international capital. With the recovery slowing up and the risk of recession looming on the horizon, the capital of the entire world flocks to the USA in order to try and save itself from the threatening reflux. The present movement of speculation is the sign of the worr­ied state of international finance.

Indebtedness: A time bomb at the heart of world economy

In order to cover its deficits, the USA goes into debt. The US cannot make too much use of the printing press for fear of triggering off an un­controllable inflationary process. Instead it draws in foreign capital. But as Volcker says: “The United States cannot live indefinitely beyond its means thanks to foreign capital.” And indeed, the present indebtedness is phenomenal.

The total debt of the USA is $6000bn. Such dizzying figure lose their meaning - a 6 followed by 12 noughts! That amounts to two years of the production of the USA, six of Japan, ten of Germany!

For any of the underdeveloped countries, such a situation would be catastrophic. The IMF would intervene urgently to impose a draconian auster­ity plan. This shows that the present strength of the dollar is a gigantic cheat of economic laws. The USA profits from its economic and mil­itary strength in order to impose its law on the world via the dollar - its national currency but at the same time the principal international exchange currency.

Do the economic laws no longer play their role? Is the dollar dodging all the rules? Is its ascent unstoppable and inevitable? Certainly not. The policies of state capitalism can postpone the day of reckoning of the crisis through mon­etary policies, but this only pushes the con­tradictions to a higher, more explosive level.

The declarations of Volcker which provoked the fall of the dollar’s course on February 27th are unambiguous on this point. He himself, hav­ing a year ago declared that the foreign debt was “a pistol pointing to the heart of the United States” followed this up by saying that “in view of the extent of the budgetary deficit, the swelling of American borrowing abroad contains the seeds of its own destruction”, and he added the precision in relation to the course of the dollar “I can’t predict when but the scenario is in place.”

The recession looming on the horizon

The American deficit no longer suffices, despite its importance, to maintain the world mini-rec­overy, the effects of which anyway mainly touched the USA while Europe was stagnating. The specter of recession is looming on the horizon, and this perspective cannot but stir up the horror of the capitalist financiers.

All the big American banks have lent out enorm­ous sums, up to ten times their real resources. For example, to mention simply the commitment of the principal American banks to five Latin Amer­ican countries (Argentina, Brazil, Venezuela, Mexico, Chile): Citicorp 174% of the share hold­ings, Bank of America 158%, Chase Manhattan 154%, Manufacturers Hanover 262%, Continental Illinois 107%, etc. There are about 14,500 American banks in a similar situation. (Washington Institute of International Economy)

Recession means millions of workers reduced to unemployment, thousands of bankrupt enterprises, dozens of countries having to close payments. Sectors which cannot repay their debts in turn push the banks into bankruptcy. The bankruptcy of the Continental Illinois could only be avert­ed by injecting a further $8bn thanks to the aid of other banks and of the American state. But what’s coming up on the horizon will not be so easy to absorb. What is in the making is the bankruptcy of the international financial system, with the dollar at the heart of this bankruptcy.

A brief recession of only six months would increase the federal deficit from $200bn to $500bn, according to a study by Chase Econometrics. In the face of such a situation, the USA would haveno other choice but to cover this deficit through a massive recourse to printing money, since the capital of the entire world would no longer suf­fice, thereby relaunching the galloping inflat­ionary spiral which Reagan puffs himself up ab­out having vanquished. Such a situation could only provoke a panic on the financial markets, leading to a return to speculative tendencies, this time acting against the dollar, plunging the world economy into the throes of a recess­ion the like of which it has never known before, and all this going hand in hand with hyper­inflation.

That is the scenario which Volcker was talking about. It is a catastrophic scenario. The American government is trying to utilize each and every artifice in order to hold back this day of reckoning: suppression of orders at their source, the internationalization of the yen, Reagan’s appeals to the Europeans to put them­selves more in debt in order to support the American effort and maintain economic activity. But all these expediencies are not enough, and the present headlong flight can only show the impasse of world capitalism and announce the future catastrophe.

What are the consequences for the working class?

The Reaganite recovery is essentially limited to the USA where the rate of unemployment fell by 2.45%. In 1984, in contrast, for the entirety of the underdeveloped countries, there was a plunge into a bottomless misery, a situation of famine such as in Ethiopia or Brazil, whereas in Europe the relative maintenance of the economy hasn’t prevented an increase in unemployment: 2.5% in 1984 in the EEC. With the let-up of the recovery, these last months have seen an upsurge of unem­ployment: 600,000 more unemployed for the EEC in January 1985, 300,000 alone for West Germany, which, with this progression, has beaten its rec­ord of 1953 with 2.62 million unemployed. The perspective of the recession implies an explosion of unemployment and a descent into a Third-World­like misery at the heart of industrial capitalism. The complete collapse of the illusion in the possibility of an economic recovery will show the impasse of capitalism to the entire world proletariat. This poses all the more the necessity to put forward a revolutionary persp­ective as the sole means of survival for humanity, since capitalism is heading for its destruction.

World capitalism is in an economic impasse, on the edge of the cliff, and the bourgeoisie itself is beginning to take account of this. It is push­ed more and more from the economic terrain to­wards the military level in a headlong flight towards economic catastrophe.

The American budgetary deficit goes essentially to finance its war effort in which gigantic sums of capital are engulfed and sterilized (see table 3). 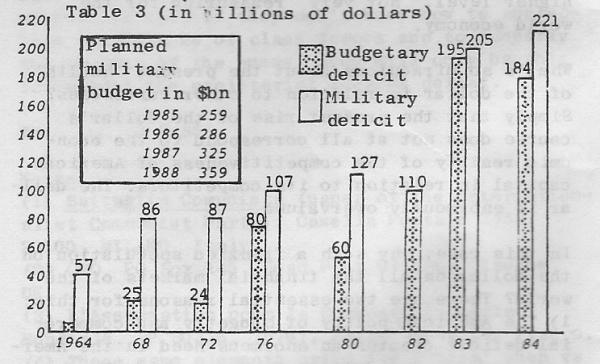 In January 1985 orders in durable goods increased by 3.8% in the USA. But if we take away military orders, there was in fact a drop of 11.5% of in­coming orders. Behind the accelerated nose-dive in the economic crisis which is shaping up is the exacerbation and acceleration of inter-imperial­ist tensions, the mad rush of the bourgeoisie towards war. Capitalism no longer has a future to offer humanity. The last illusions in its cap­acity to find a way out, through a hypothetical technological revolution, are being dashed against the reality of bankruptcy.

President Reagan will certainly not go down in history as the matador who conquered the crisis, but as the president of the biggest economic crisis that capitalism has ever known. The reck­oning of a reverse has begun; the recession cannot be averted. This recession will signify a new acceleration of tensions, a deepening of class antagonisms. On the capacity of the proletariat to develop its struggles, to put forward a revolutionary perspective, depends the future of humanity. Capitalism is heading towards bank­ruptcy and the whole of humanity risks being wiped out in a new nuclear holocaust.

The dollar is still the dollar-emperor ruling the entire world economy. But the emperor is naked and this fact will soon pierce the smoke­screen for capitalist propaganda.