The bourgeoisie is making a lot of noise about a so-called economic ‘recovery’ which is supposed to represent the victory of Reagan’s austerity policies. The OECD begins its report, in Econ­omic Perspectives, December 1983, with an almost triumphant declaration: “The recovery of econ­omic activity now involves almost all the coun­tries of the OECD.” And it highlights a series of positive points: increasing GNP and indust­rial production, falling inflation, reduction in budget deficits, increasing profits. Two pages later, the OECD writes: “If this appreciation were to prove false, it would be necessary to revise this forecast as to the vigor and dura­tion of the recovery.” ... This kind of remark shows how much confidence the bourgeoisie its­elf has in the recovery it announces so loudly!

Undeniably, certain economic indicators which were negative in 1982 turned positive in 1983, which means simply that 1983 was less appall­ing than 1982 -- at least for the bourgeoisie. From this to a real economic recovery there is not a step but a gulf to be leapt. Before analyzing its causes and perspectives, let us briefly examine the reality of this ‘recovery’.

The growth in GNP and industrial production

This growth is to all intents and purposes lim­ited to the US and its extent is wretched enough, In the US, the GNP has risen by 3.5%, whereas in Europe it has hardly risen by 1%. Industrial production rose by 6% in the US, which does not even compensate for the fall of 1982 (-8.1%): the balance over two years is still a fall of -2.6%! As for the European countries, the growth in their industrial production is magnificent, varying as it does from ... -4.3% in Italy to 1% in Britain! 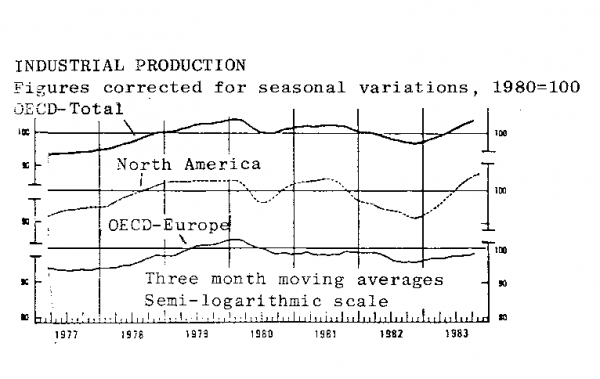 Degree of use of the productive forces

Under-utilization of the productive forces is one of the clearest signs of over-production. Despite a 10% increase over 1982, the rate of utilization of productive capacity has not risen above 80% in the US. As for unemployment, cont­rary to the miracles that were forecast, it has only fallen at an annual rate of 0.2% in the US and continues its rapid advance in all the Euro­pean countries. 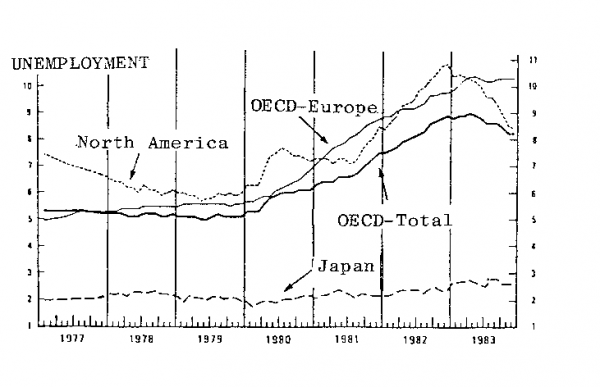 Company investments have continued to decline, despite the ‘recovery’. Since these investments are the basis for any long-term recovery, this is a sign that the bourgeoisie itself does not believe in the recovery. 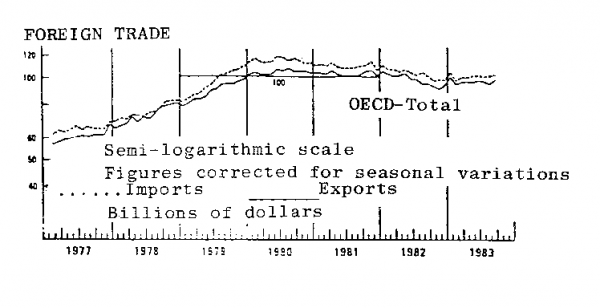 Taken as a whole, these figures (drawn from the bourgeoisie’s official statistical body -- the OECD) prove incontestably that, while capitalism may well be pausing briefly in its deepening crisis, there can be no question of a real econ­omic recovery. The only positive development that the bourgeoisie can boast of is a real drop in inflation, and we shall see later just what this drop in inflation really means. The exist­ence of a momentary lull in a general course to­wards collapse merely expresses the uneven pro­file that has always characterized the develop­ment of the capitalist economy. The important thing is to see whether this development is rising or falling: today, it is pointed firmly downwards, with no perspective of reversing direction.

After the profound recession of 1975, the west­ern bourgeoisie resorted to a massive dose of its classic drug: credit, printing paper money without any economic counterpart. The United States played a primary role here: the multi­plication of dollars and its balance of pay­ments deficit did indeed act as a locomotive on the whole world economy. This policy’s failure, in the form of unbridled worldwide inflation, pushed the bourgeoisie to reverse the tendency and develop its monetarist con­ceptions. History does not repeat itself, and the bourgeoisie today no longer has the means to reproduce the same scenario, since the specter of a collapse in the international monetary system remains ever-present, even without inflation, if only because of colossal state indebtedness, which simply gets worse as the dollar rises. And so, despite the fam­ous ‘recovery’, the US experienced a record number of bank failures in 1983.

The ‘trick’ invented by the American bourg­eoisie to stimulate the economy without stimulating inflation consists essentially in transferring capital from one hand to the other. On the one hand, the US, thanks to exceptional interest rates, attracts capital from all over the world, and repatriates the mass of dollars scattered abroad. On the other, the worldwide reduction in wages and rapidly growing productivity allows the bourgeoisie to increase significantly the capital accr­uing to it in the form of surplus value. This double movement of impoverishment of the prol­etariat and of other countries relative to the US, gives the latter the necessary resources to finance its budgetary, commercial and current operations deficits. These have grown considerably during the previous year, showing that Reagan’s monetarist language is merely, in the final analysis, a bluff. The federal budget deficit has tripled in two years, from $70 billion in 1981 to $179 billion in 1983; the balance of payments deficit has doubled in one year, from $36 billion in 1982 to $63 bill­ion in 1983; the current operations deficit has quadrupled in one year, from $11 billion to $42 billion.

These astronomical figures, which are nonethe­less accompanied by falling inflation and a rising dollar -- apparently in contradiction to all economic logic -- are a good expression of the enormous flow of capital into the US taking place today. At the same time, it reveals the full limits of the present ‘recovery’. In con­trast to the end of the ‘70s, the US is no long­er up to acting as ‘locomotive’ for the world economy. Although it is once again importing vast quantities of goods, the uplifting effect of pursuing this policy is partially wiped out by the transfer of capital in the same direc­tion, and the increasing cost of raw materials priced in dollars (eg, oil). The improvement of the economic situation in the US, which has nothing spectacular about it as we have seen, is accompanied by a stagnation of the European economies, which is not destined to change qualitatively.

In the longer term, the present mechanism of the US ‘recovery’ heralds a catastrophic future for the world economy. The present over-valuing of the dollar, as a result of the high American interest rates, allows the US to import cheaply, but it undermines the competitiveness of the exporting sector, which further increases the balance of payments deficit. Under the pressure of the law of value, the dollar is bound to de­value, and the whole beautiful machinery at work today will burst like a balloon. At this point, the American budget and balance of payments deficits, which have been left to swell in the most spectacular manner, will no longer be com­pensated and the inflation presently hidden by high interest rates and the movement of capital will come into the open.

Capitalism will then find itself in a situation ten times worse, and will be hurled ever deeper into the abyss.