The big industrial countries have been strengthening their armed presence in the thea­tres of military operations with a new-found vigor, after a period in which, following the withdrawal of American troops from Vietnam in 1975, this presence had been reduced. In 1982, the ‘war game’ writ large played out in the Falklands clearly marked a turning point in the military policy of the western bloc and was a prelude to the ‘interposition’ in the Lebanon of the American, French, British and Italian expeditionary force that same year, an ‘interposition’ which became a direct intervention in 1983.

This policy has been accompanied by an intensi­fication of military expenditure, expressing capitalism’s headlong flight towards the only solution it can offer to the definitive crisis of its system of exploitation: generalized war. However, the massive weight of the war economy doesn’t mean that we are in the same situation as the 1930s. Today, the policy of arms spending can in no way provide a palliative to the crisis, as was the case then. On the contrary, this policy can only accelerate capitalism’s plunge into the abyss of the crisis. It is un­able to reabsorb the massive unemployment in the heart of the industrial centers, and does not allow for a real economic recovery. Thus, the conditions ripen for a response from the working class, which is beginning to raise its head again in the central countries of capitalism.

The acceleration of military spending

The big capitalist countries are more and more directly carrying on the dirty work of military confrontation between imperialist rivals -- work that was previously left to smaller client states. In the 1970s, the great powers tended to hold back the acceleration of military spending, delegating the role of gendarme against the Russian bloc to their Third World allies. How­ever, this relative slowing down never amounted to an actual reduction. Military spending never stopped growing, particularly in the Third World and the eastern bloc.

After relying mainly on their economic pre­ponderance on the world market to counteract the Russian bloc, the main western countries are be­ing compelled by the deepening crisis to accel­erate their armaments policies.

Industrial production in these countries is at best using 75 per cent of its capacity, and investments are dwindling. Even those bourgeois analysts who believe most strongly in the US economic ‘recovery’ -- now fewer and fewer in number -- are perplexed about the fact that this ‘recovery’ is being accompanied by a fall in in­vestment. The pressure from the falling rate of profit is intensifying, all the more because productivity in the industrialized countries has not stopped growing. 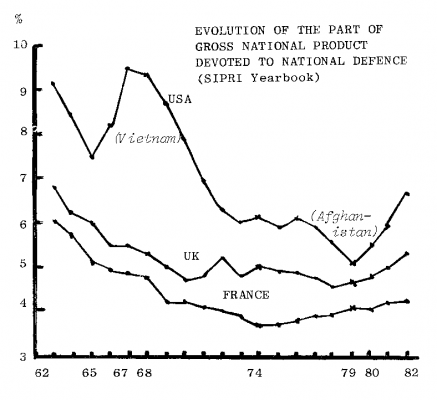 In the USA, including high technology sectors like electronics, bankruptcies are proliferating. In automobiles and aeronautics, giant companies like Chryslers, Boeing, Macdonnell Douglas etc owe their survival to military orders: tanks for Chrysler, Awacs for Boeing, fighter planes for Douglas.

France, the second biggest arms producer in the western bloc, is experiencing an unprecedented blockage in agriculture and the food industry, mines, steel, and electronics. In aeronautical construction there is a greater and greater fus­ion between the civil and military sectors, with the arms sector dominating. Civil aviation Is stagnating; the military sector is the only one that is to some extent holding up against the recession.

Along with the USA, France and Britain, Japan is playing a growing role in arms production, notably on the electronics side, which is so indispensable in today’s military strategy.

Similarly, West Germany, which like Japan is supposed to have a ‘low profile’ in military matters, is spending as much as France in this sphere.

What’s more, the official figures only show a part of what is actually devoted to armaments. In 1981 for example, 25 per cent of world res­earch was officially devoted to military needs. In fact, 90 per cent of research programs are under the control of the army. All the ‘techni­cal advances’ in civil society are spin-offs from the arms industry. In computers, for exam­ple, the international standards for scientific or management programming are decided by the Pentagon. 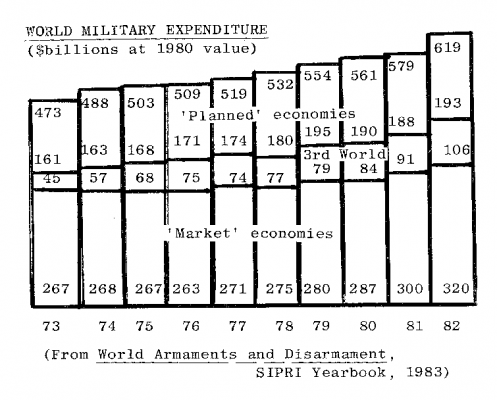 The open crisis reveals that the entire capi­talist economy is oriented towards war, and that this war economy is no longer capable of ensuring the accumulation of capital, to say nothing about satisfying human needs. On the contrary, a growing proportion of investments are directed towards producing the means of des­truction. According to the World Bank, 10 per cent of world spending on armaments represents what it would cost to resolve the problem of hunger in the world. Military expenditure has now reached the astronomical sum of more than a million dollars … each minute.

“… armaments have the unique characteristic of possessing a use value which does not allow them to enter, in any form, into the process of production. A washing machine can contribute to the reproduction of labor power, just like loaf of bread or a shirt. Through the content of their use value, these goods can serve as capital in the form of variable capital. A com­puter, a ton of iron or a steam engine, insofar as they are means or objects of labor can func­tion as capital in the form of constant capital. But arms can only destroy or rust.” (from the ICC pamphlet, The Decadence of Capitalism)

Even for the exporting countries, arms today less than ever constitute a palliative to the crisis. The costs of armaments cut into the competitiveness of each national capital, a fact vouched for by the USA’s insistence that Japan and Germany rearm themselves so as to share the burden of these costs.

Also, competition in the arms market is getting more acute. The buyer countries are themselves becoming competitors at many levels: “It has be­come practically impossible to obtain import contracts that don’t to some degree stipulate introducing the buyers to the techniques of arms production” (L’Expansion, 1.12.83).

Finally, arms can only be bought thanks to loans from the great powers -- loans that are less and less likely ever to be repaid. Armaments don’t help to delay the effects of the crisis: they only serve to maintain and advance strategic positions in the rivalries between east and west.

Just as the USSR gets its allies to pay for its arms, the USA gets its arms paid for through the particular place of the dollar as an inter­national reserve currency. Using high interest rates to drain towards the USA capital given over to speculation on the dollar, the bloc lea­der gets other countries to finance its budget deficit. Because the dollar is becoming more expensive, the US buys at almost half price in these countries. In 1982, the American budget deficit corresponded exactly to the national defense budget (Survey of Current Business, 7/83). The American ‘recovery’ is entirely bas­ed on the printing of money, and the inflatio­nary pressures that this inevitably engenders are leading towards a new surge of hyper-infla­tion that will threaten the international mone­tary system. And it was precisely against this danger that the bourgeoisie had to reshape its policies at the end of the seventies.

But it’s the extension of mass unemployment that most clearly shows the true bankruptcy of, the system. Whereas before World War II arms production permitted a spectacular reabsorption of unemployment -- from 5,331,000 to 172,850 in the US between 1933 and 1938, from 3,700,000 to 200,000 in Germany -- this isn’t the case today. With the gigantic growth in productivity based on the microchip etc, the present level of re­armament in the big industrial countries has had a negligible effect on unemployment. This hasn’t stopped growing and will continue to do so. 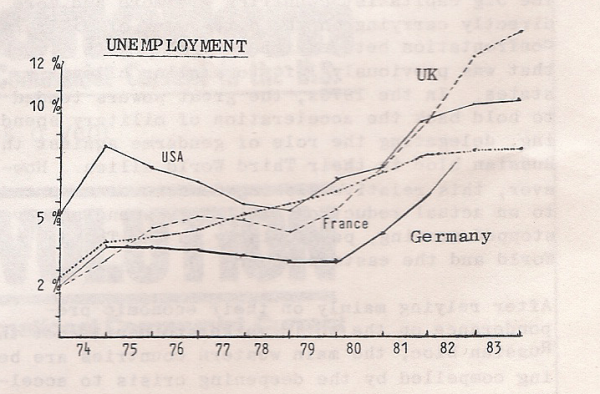 Arms production does not provide a real outlet for capitalism, and today less than ever. It is becoming a greater and greater burden for each national economy.