“In each crisis, society is smothered under the burden of its own productive forces, of its own products which it cannot put to use, and it is thrown helplessly up against this absurd contradiction: the producers have nothing to consume because there aren’t enough consumers.” This passage, written by Engels in 1876 for Anti-Duh­ring shows the whole relevance of marxism today.

The capitalist economy is collapsing because of a lack of solvent outlets, ie of consumers who can pay. This is the contradiction which trans­lates itself into the horrible paradox in which the majority of the world's population is threatened with famine, in which the living standards of the proletariat is sinking below the poverty line, not because not enough is being produced but because capitalist industry produces more than it can sell; not because there’s ‘not enough’ but because there’s ‘too much’ as far as the laws of capital are concerned.

Because there is generalized overproduction on a market that is too restricted, competition bet­ween capitalists becomes more and more frenzied. The policies of ‘recovery’ based on an intensive utilization of credit, which artificially expand the market, are coming up against the barriers of inflation which threatens to make the inter­national monetary system explode. The bourg­eoisie is seeing the mechanisms of the econ­omy escaping its control: it can’t prevent deeper and deeper lurches into recession, while at the same time inflationary pressures are becoming more and more powerful. 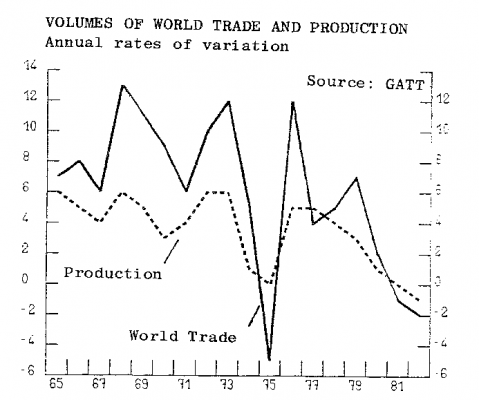 Graph no 1 shows that since 1967 the policies of ‘recovery’ have three times led to a revival of world trade, ie of demand to keep production going. But they haven’t prevented the fall in the growth of production, nor the recession of 1974-75, nor the still more profound one that began in 1980.

Why is this? Because, as an exploited class, the proletariat produces more than it can consume.

This supplementary production, surPlus value, can only be realized and lead to an accumulation of value if capital sells it to extra-capitalist sectors. When these disappear, capital can no longer find outlets for the totality of produc­tion. In order to sell, you have to be as com­petitive as possible, to reduce wages in order to reduce the costs of production. As each cap­italist nation has no choice but to follow the same policy, the world market becomes more and more restricted. In these conditions, production collapses, factories close and the workers are hurled into unemployment, which does not make them good consumers. The policies of austerity imposed on each bourgeoisie by the competitive nature of the capitalist economy can only accelerate the fall in world demand and thus the collapse of production. 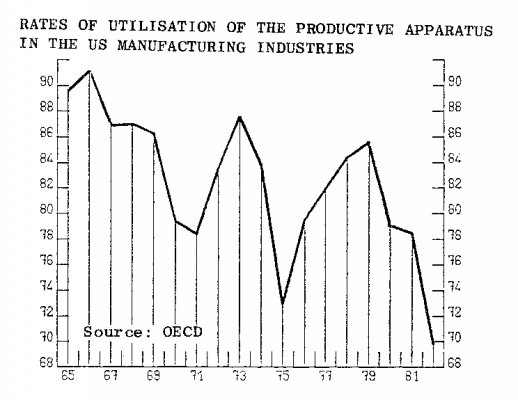 Graph no 2 shows the fall in the rate of utilization of the productive apparatus in the USA, the world’s major power, which has 20%, of world production. At a rate of 68% in 1982, this is the equivalent of nearly one factory in three closing down. In West Germany at the end of 1982, 76% of the productive apparatus was being used -- the equivalent of one factory in four being closed. In Britain, only 30% of factories are operating at full capacity.

Capitalism can find no way out of its contra­dictions; it can only sink deeper and deeper into economic chaos and race ahead with its imperialist rivalries. The proletariat is today being subjected to an attack the like of which it hasn’t seen since the last world war. Inflation, unemployment and poverty are its daily lot, and they merely point the way to worse to come. The future of humanity depends on the proletariat’s capacity to react to all this. Capitalism has nothing more to offer but misery and death. The present economic catastrophe has no solution within capitalism, 15 years of failed economic policies show that the bourg­eoisie has no perspective: it’s up to the world proletariat to demonstrate that it alone can offer a way out.