Unemployment in the 30’s 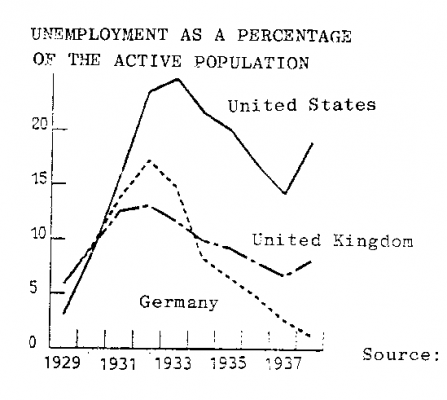 After a terrific acceleration which (especially in the US), gave rise to an explosive social situation, the state’s reflationary policies allowed a reduction of unemployment to below its 1932 level right up to the outbreak of war. Moreover, for a Proletariat still marked by the bloody repression of the revolution, the inauguration of unemploy­ment and various other benefits was the trap that allowed the bourgeoisie to defuse the political bomb of a high unemployment rate in the heart of industrial capitalism.

The State's Role in the Economy during the 30’s

The bourgeoisie defused the social bomb of unemployment thanks to the state’s reflationary pol­icies, The state came to control an ever larger and more dominant part of the national economy -- whether through the war economy in Germany, the New Deal in the US, or the Popular Front’s nationalizations in France. State indebtedness made it possible to delay the effects of the re­emerging crisis. This gave it enough respite to conclude successfully its policy of control over the proletariat in the war behind the illusion of the social state -- national socialist, Stalinist and, above all, the democratic welfare state. 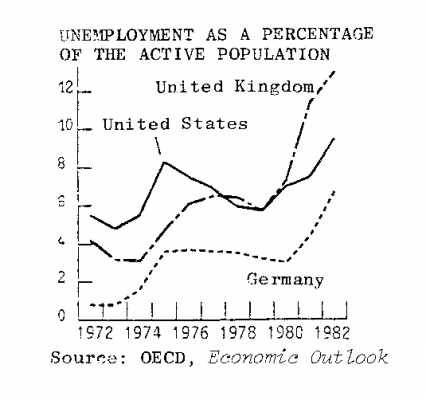 Unemployment today is developing differently from that of the great crisis of the 30s. Throughout the 70s there was a slow increase. The beginning of the 80s sees an upsurge with more than 11 million unemployed in the US, 3 million in Britain, 2.5 million in West Germany -- this is the equivalent of the entire working population of Germany, Holland and Belgium put together.

From this point of view, the situation is the opposite of that in the 30s. The crisis is developing on the basis of the exhaustion (expressed in a growing ineffectiveness) of the measures that allowed the bourgeoisie to face up to the crisis of. 1929. Unemployment is developing inexorably and ever more rapidly while social assistance is diminishing. The social situation will become more and more explosive. Employment is not going to increase while investment drops. 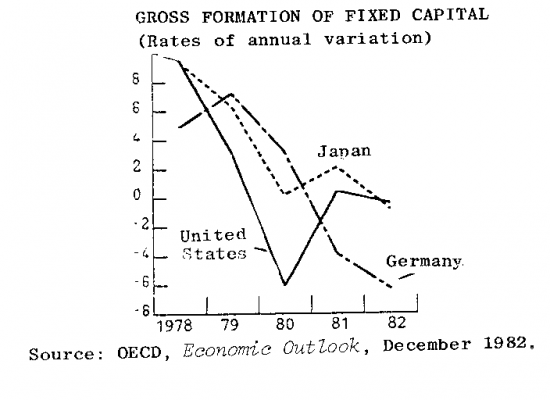 The impossibility on an oversaturated market of making any profit from the sale of commodities, the rapid obsolescence and under-utilization of the productive apparatus in the face of bitter competition, pushes the bourgeoisie not only to diminish its industrial investments but also to increase its speculation on the world market, whether on the financial level or in raw materials. Moreover, most investment is concentrated in the search for greater competivity through intensive mechanization and automation -- which inevitably eliminates more jobs than it creates. Even the hypothetical reflation that we hear so much about would only accelerate this tendency. In those conditions, unemployment can only go on rising. 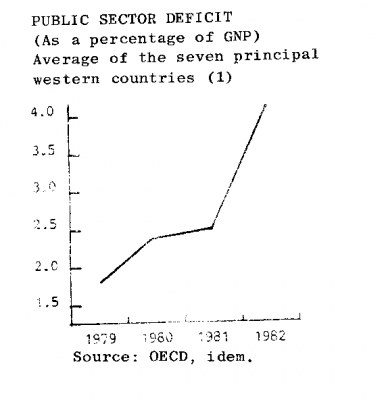 The policy of reflation is based on state indebtedness. During the 30s this policy was new and the state was not already heavily in debt; this is no longer the case today. The USA, which was the motive force behind the successive (but unsuccessful) reflations of the 70s, is now heavily in debt on the world market; the combined state and private debt is in the region of 5000 billion dollars. To liquidate this debt would require American workers to work for free for 1.5-2 years.

The policy of austerity which arrived to soak up some of this indebtedness is coming up against the instability of the international monetary system and the difficulty of attacking the living standards of a still combative working class. The colossal American budget deficit ($100 million in 1982, a possible estimated $200 million for the years to come) and the need to help out the Third World to avoid a financial collapse means working the IMF’s financial pump (an increase of 74% in its credits is planned) . The bourgeoisie is obliged to use its printing presses; the Reagan-Thatcher medicine is impotent against this indebtedness and the danger of a new upsurge of inflation -- which is the only “reflation” we can expect.

Inflation has not gone away 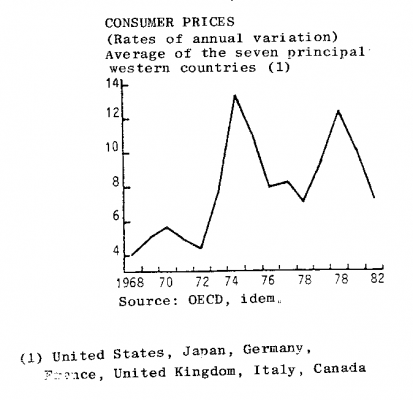 In order to justify the deflationary policies of the last few years, the bourgeoisie congratulates itself with having got inflation under control. However, inflation is not only still present but, more importantly, inflationary pressures are appearing more strongly despite the recession as we have seen. The policies of reflation and deflation, austerity, produce the same negative results and demonstrate the bourgeoisie’s inability to confront the crisis.

The policy of reflation renews inflation without preventing the tendency towards recession from getting the upper hand; the policy of deflation plunges the economy into the depression without preventing the development of inflationary tendencies. Despite the fall in inflation observed these last few years, the years to come will see the parallel development of growing inflation and growing unemployment. The working class should have no illusions; all the bourgeoisie’s economic policies are impotent to confront the crisis.