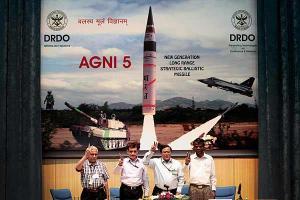 On 19th April 2012, Indian bourgeoisie launched Agni-V, its version of intercontinental ballistic missile, and gave another boost to the already raging arms race in Asia.  With this test India joined the select club of global imperialist gangsters who possess intercontinental ballistic missiles. Agni-V is supposed to have a range of 5000KM and is supposed to be capable of hitting Shanghai and Beijing.

The launch of Agni-V provoked a drum beat of rejoicing within all sections of the Indian bourgeoisie. For days on end, the entire print and electronic media was full of boastful propaganda about technical and military achievements signified by this launch. There was reckless talk of the new capability to hit all parts of China and other hostile countries. Factions of the Indian bourgeoisie were busy assuring themselves that with launch of Agni-V they are now better equipped to confront its enemies and to fulfill its global imperialist dreams. The media also tried to use all these drum beats and propaganda to instigate intense patriotic fever.

Launch of ICBM Agni-V by India is just one expression of the frenzied arms race developing in Asia today. There are numerous players engaged in this game and India is one of the major players in it.

In middle March 2012, Indian and world media was full of stories that over last three years India has been the biggest arms buyer in the world. According to a report in NDTV on 21 March 2012, India has replaced China as the world's largest arms buyer, accounting for 10 per cent of all arms purchases during the past five years. In Feb 2012, India placed an order for 126 Rafale MMRCA (medium multi-role combat aircraft) fighter jets on Dassault of France. To cost 20billion USD (TOI, 1 Feb 2012), it is considered the largest single order for military equipment in the history of capitalism. This order is in addition to another order for 272 Sukhoi-30MKI fighter planes worth $12billion under execution from Russia.

But even this frenzied militarization is not enough for the Indian bourgeoisie.  We can see this in another campaign waged in Indian Media in April 2012 itself, just a few days before the launch of Agni-V. In the beginning of April, Head of the India Army wrote a long letter to the Prime Minister. This letter told the PM that Indian army is not equipped for war as it does not have sufficient arms and ammunitions. The letter was leaked to the press and was taken up by the parliament. After discussions with the heads of Army, Air Force and Navy, the parliament has now declared that Indian forces do not have sufficient arms and ammunition to wage a war. Although having an element of faction fights, this campaign primarily served two functions for the bourgeoisie. One is to swamp and hide the fact from its own people that India is already huge spender or armament – the biggest buyer in global arms bazaar. The second is to convince the exploited population that even more need to be spent on militarization.

We should be clear on one thing – Indian bourgeoisie is not the only one engaged in frenzied militarization. All countries in Asia – Japan, South and North Korea, Philippines, Taiwan, Saudi Arabia etc are engaged in the same race. Saudi Arabia and its sister Emirates are spending nearly 100 Billion USD on militarization. China is leading the arms race in Asia today and has doubled its military spending to nearly 150 Billion USD this year. Even the global cop, the USA, has accelerated its military spending focused on Asia in general and China in particular.

Why this Arms Race in Asia?

In the beginning of last century capitalism entered its phase of decadence. What this meant was that existing world markets got divided among the main capitalist powers and these markets were no longer sufficient to absorb the products of all the capitalist nations. To expand or even to exist, each capitalist country was compelled to snatch necessary markets from its rivals. The only alternative available to every capitalist country was to confront its rivals in massive global military confrontations and to defeat them or to accept defeat and subordination to its enemies. This was the stark alternative that lead to gigantic militarization throughout Europe and America from the beginning of 20 the century. It was the stark alternative which was monstrously played out in First World War and then World War-II, each of which lead to the slaughter of corers of people and destructions of whole nations and continents.

Since the end of second war, this process of military confrontation and preparation for them has gone on unabated among the old imperialist powers till today. In the period of decadence, in which capitalism has been living since the start 20th century, capitalism can survive only by war. As a result all countries are permanently engaged in furious preparations for war.

In the last few decades economic power of China, India and many other countries in Asia has multiplied. Now capitalism in these countries is faced with same alternative, the same choices as advanced capitalist countries started facing last century. And these newly ‘emerging powers’ have been responding to the situation like old imperialist powers, which is to undertake massive process of militarization and preparations for war. We can see this underway throughout Asia.

This despite the fact that working classes in these countries, above all in India and China, live in abject poverty, misery and in a condition of mass unemployment.

As we have seen, Indian bourgeoisie like its counterparts in other countries is also engaged in a frenzied process of militarization. The recent launch of the ICBM is situated in this destructive continuity. It is an effort by the Indian bourgeoisie to gain parity in destructive power with its immediate imperialist competitor, the Chinese bourgeoisie.

Bourgeoisie and the Working Class

What should the working class do?

The working class can not and should not take sides in imperialist war and war preparation. It must condemn all war mongering. Response of working class in India to launch of ICBM by ‘its’ bourgeoisie can not be anything but condemnation and denunciation.

Working class has to intensify its class struggle everywhere in the world against intensifying attacks on its living and working conditions. Self organization, extension, politicization, territorial and international unification of these struggles are indispensable for marching forward toward the goal of putting an end to the global capitalist system, the root cause of all socio economic problems, arms race, war mongering and war. This only can save humanity. There is no other way.